In the space of just seven weeks since the abrupt resignation of Vasily Sinaisky as Bolshoi Theater music director and chief conductor, the theater has managed to come up with a replacement of uncommon distinction and promise.

Assuming the post on Feb. 1 under a four-year contract will be 36-year-old Tugan Sokhiev, a native of North Ossetia, who over the past decade has become one of the most sought-after conductors of his generation and who currently leads two distinguished symphonic ensembles in Western Europe, the Orchestre National du Capitole, in Toulouse, France, and the Berlin-based Deutsches Symphonie-Orchester.

A graduate of the St. Petersburg Conservatory, Sokhiev studied there with the legendary teacher of conducting Ilya Musin — whose many pupils over nearly seven decades included the Mariinsky Theater's Valery Gergiev, St. Petersburg Philharmonic Orchestra musical director Yury Temirkanov and Teodor Curentzis, currently artistic director of the Perm Theater of Opera and Ballet — and completed his studies under the guidance of Temirkanov.

Although Sokhiev has never conducted at the Bolshoi, he is not unknown to Moscow audiences. Most recently, last October, he brought his Toulouse orchestra to town for a pair of well-received concerts at the Moscow International House of Music.

Since the resignation of Alexander Lazarev 19 years ago, the Bolshoi has lacked the strong musical leadership it enjoyed under an unbroken succession of notable conductors from near the beginning of the 20th century, among them, in addition to Lazarev, such outstanding figures in the musical life of Russia as Samuil Samosud, Nikolai Golovanov, Alexander Melik-Pashaev, Yevgeny Svetlanov and Gennady Rozhdestvensky.

Sinaisky, whose background lay mainly in symphonic conducting rather than opera, did little to raise the Bolshoi's musical standards during his three seasons at the helm.

He was frequently absent from the theater and seemed to leave much of the decision-making in the hands of others. Those performances of his that I attended struck me as little more than merely competent. 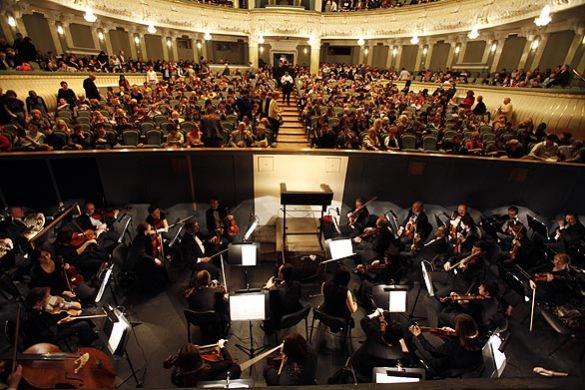 The Bolshoi Orchestra has long lacked a highly experienced conductor.

According to interviews with Sinaisky, his departure from the Bolshoi, just two weeks before his scheduled appearances leading the premiere of Giuseppe Verdi's opera "Don Carlo," was triggered by disagreement with Bolshoi general director Vladimir Urin on certain unspecified matters of artistic policy.

Unlike his predecessor, Anatoly Iksanov, Urin seems determined to take a hands-on approach when it comes to shaping the future of opera and ballet at the Bolshoi. And in Sokhiev, Urin has apparently found a congenial colleague, a point he went out of his way to stress when introducing the conductor at a meeting with the press on Monday.

"For me, it was important in principle," said Urin, "that the new conductor be from Russia … a person who could speak with people in the theater in a common language. It was also important to know what this person believed in and how he viewed contemporary musical theater. Despite a serious difference in age between Tugan and myself, our views are very similar."

"The invitation was unexpected," Sokhiev responded, "and the chief thing that convinced me to agree was what I discovered in the person of the theater's present director."

Although Sokhiev officially takes on his duties at the Bolshoi the beginning of next month, his very full schedule of engagements with his own orchestras and as guest conductor elsewhere means that he can only work his way into the job gradually.

From now though June, Sokhiev will be spending a few days in Moscow each month, helping to develop plans for the Bolshoi's next three seasons and, as a matter of special priority, becoming acquainted with the internal workings of the theater and with the different elements — artistic, technical and administrative — within its nearly 3,000-strong work force.

"Each month I will be here more and more often," said Sokhiev, "and because of that, I will be reducing my engagements in the West as much as possible. I stand ready to give the Bolshoi as much of my time as is needed."

In July, Sokhiev is due to begin rehearsing the first of two as-yet-unnamed projects he is scheduled to undertake during the 2014 to 2015 season. And as of September 2015, he will finally be spending the lion's share of his time at the theater.

It needs to be noted that Sokhiev, unlike his immediate predecessors, Sinaisky and Alexander Vedernikov, comes to the Bolshoi with considerable — and quite successful — experience in leading opera. In fact, his initial appointment, in 2001, was as musical director of Britain's Welsh National Opera.

Two years later, he made his debut at the Metropolitan Opera in New York City leading Pyotr Tchaikovsky's "Eugene Onegin" and since 2005 he has regularly conducted at the Mariinsky Theater. He has also appeared at the Paris Opera, the Teatro Real in Madrid and the opera festivals at Orange and Aix-en-Provence in France.

As of yet, no performances by Sokhiev at the Bolshoi have been scheduled, so audiences will have to wait.