Popular actor and director Ivan Okhlobystin made headlines in ­December when he suggested that Russia should solve its "homosexual problem" by burning all gay people alive.

Notably, neither the Russian Orthodox Church nor the Kremlin condemned the statement. In ­addition, the Prosecutor General's Office showed no interest in charging him with extremism or ­inciting hatred toward people based on their membership in a social group — crimes that it has vigorously prosecuted in cases not involving gays.

Okhlobystin, a former Russian Orthodox priest who briefly flirted with the idea of running against Vladimir Putin for president in 2011, has not ­retracted or apologized for his remarks.

If actor Ivan Okhlobystin had made his homophobic comments in the U.S., his career would be over. But in Russia, his career got a nice boost.

But he see­ms to have softened his position somewhat over the New Year holidays. Instead of killing homosexuals, Okhlobystin now seems content with just imprisoning them. Last week, he wrote an open letter to President Vladimir Putin, asking him to ­return a Soviet-era anti-sodomy law that would carry a maximum five-year sentence for all homosexuals.

In his open letter to Putin, Okhlobystin wrote that the gay propaganda law that Putin signed in June does not go far enough to battle "gay fascism." He has defined this fascism as a powerful and well-­financed Western propaganda campaign that attempts to ­legitimize homosexuality and corrupt Russia's traditional foundations.

For added emphasis, Okhlobystin wrote that since the homosexual lifestyle is offensive to ­Orthodox believers, gays violate another law that Putin signed in July — "offending the religious feelings of others," which carries a maximum three-year prison sentence.

If that weren't enough to convince Putin to ­imprison all homosexuals, Okhlobystin wrote, "Since sodomites can't have their own children … [they] will be forced to increase their ranks by seducing and depraving straight kids."

In response, pro-Kremlin analyst Sergei Markov wrote in a blog last week that it is not homosexuals' fault but their great misfortune that they are attracted to the same sex. Russians should show mercy toward them and try "to cure them of their disease, not send them to prison."

Meanwhile, archpriest Vsevolod Chaplin, the Russian Orthodox Church's top spokesman, suggested that the Russian people should decide in a ­national referendum whether to imprison gays. 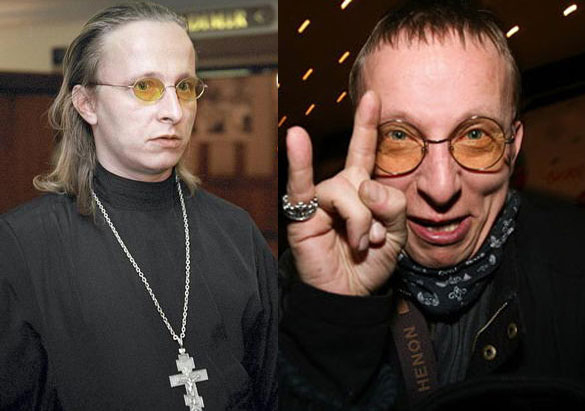 Chaplin told Izvestia newspaper that throughout history, nations have treated homosexuality as a crime. "I am convinced that these sexual relations must be completely prohibited from our society. … If it is necessary to apply the law [to criminalize homosexuality], let's ask the people if they are ready for this," Chaplin said.

Kremlin-loyal propagandists such as Okhlobystin, Rossia 1 television hosts Arkady Mamontov and Dmitry Kiselyov, and a slew of political analysts and State Duma deputies have spent the past year ­inundating millions of viewers with rabid homophobia about the dangers that "sodomites and perverts" pose to Russia's existence. Then, Chaplin suggests, Russia should ask the same audience in a referendum: "By the way, how do you feel about Russia's 'sodomites and perverts'? Wouldn't it be a good idea if we lock them up as we did during the Soviet period?"

That would be like holding a referendum among Southern U.S. whites in 1920 on whether to keep their state governments' segregation policies in place, or asking the same group in 1840 whether to keep slavery as a legal institution.

The problem is that instead of promoting a balanced and educated public discussion about the roots of homosexuality and dispelling the false myths surrounding it, the state is actively promoting and inciting homophobia. As long as this continues, ignorance about and hatred for homosexuals will only ­increase in society, and more Russians will be willing to sign on to homophobic initiatives such as Okhlobystin's.

This is why it is a bad idea to hold referendums on these types of issues in "illiberal democracies" like Russia.

In Russia, it pays to be a homophobe. After his recent homophobic statements, Okhlobystin earned praise from his many old — and newly ­acquired — fans who support his views. He not only retained his leading role in the popular series "Interny" on TNT television, but on Tuesday he was appointed creative director of BAON, a fashionable clothing retailer. Meanwhile, Mamontov and Kiselyov have helped increase ratings on Rossia 1 television in no small measure thanks to their numerous homophobic comments about the need to cleanse Russia of its "sodomite contagion."

The Kremlin's and Orthodox Church's support for Okhlobystin and other homophobic public figures sends a dangerous message to society — that it is not only acceptable to stigmatize and discriminate against gays, but that it would be a good idea to ­imprison, or even kill them, to uphold Russia's "traditional values."

If Okhlobystin, Mamontov or Kiselyov worked in the U.S. and had made the same homophobic comments, their careers would be finished. Take, for example, U.S. actor Alec Baldwin, who lost his new job as a presenter on MSNBC in November for doing much less: yelling out an anti-gay slur to a group of ­paparazzi. Likewise, Fox Television sports commentator Craig James was fired in September for making a similar comment.

Okhlobystin and others might call these responses the result of Western society caving in to "gay ­fascism." Putin might call it "an oppressive form of tolerance and political correctness," something he alluded to in his December address to the nation. I would call it a healthy sign of civil society.

There is a belief that the Russian elite under President Vladimir Putin has only ever been interested in money. Yet Putin’s militant, anti-liberal...
opinion Andrei Pertsev

Lord of the Masses: How Russia’s Fringe Elements Went Mainstream

Russian President Vladimir Putin has one message that he likes to convey in his public speeches: that he is very much a man of the people, with the blood...
opinion Leonid Gozman

How Exactly Could the Putin Regime Collapse?

Everyone, except perhaps Putin himself, understands that his regime is nearing its end. At the very least, discussions about the country’s future...
opinion Arshak Makichyan

Russian delegations to climate conferences have never been burdened with particularly high expectations, though even by that standard, the Russian showing...