To celebrate the 200th anniversary of the birth of Giuseppe Verdi, the Bolshoi Theater might have taken a relatively painless route by opting for a new production of one of the composer's well-known works, such as "Rigoletto," "Il trovatore" or "Aida," that have long been absent from its stage.

Instead, it has turned to "Don Carlo," the longest of all Verdi's operas and possibly the most challenging, both musically and dramatically. "Don Carlo" opens tomorrow night on the Bolshoi's Main Stage for an initial run of six performances.

Verdi originally wrote "Don Carlo" to a French libretto on commission from the Paris Opera. Containing the five acts, including a ballet sequence, that were obligatory in Parisian "Grand Opera" of the day, it made a highly successful debut there in 1867.

The libretto was almost immediately translated into Italian, with "Carlos" of the original title changed to the Italian "Carlo," and soon appeared on opera stages throughout Europe and in America. Troubled by reports he received of cuts and rearrangements being made in productions of the opera, Verdi eventually set about creating a definitive Italian version, omitting the first act and the ballet. In revised form, it first appeared in Milan in 1884.

The long-neglected original French version has enjoyed a certain popularity in recent times, but the 1884 version is the one most often seen on present-day stages and the one which the Bolshoi is due to present this week.

"Don Carlo" is based on Friedrich Schiller's epic drama "Don Karlos," which had its premiere in Hamburg exactly 80 years before the appearance of Verdi's opera. Its story of political intrigue and private passions, set in mid-16th-century Spain at the court of  King Philip II, plays fast and loose with historical fact. Far from being a heroic champion of freedom and an ardent lover, as portrayed in both the play and the opera, the real Don Carlos, King Philip's first-born son and heir, was, according to contemporary descriptions, weak, physically repulsive and mentally unstable and was eventually sent off by his father to prison, where he died at the age of 23. 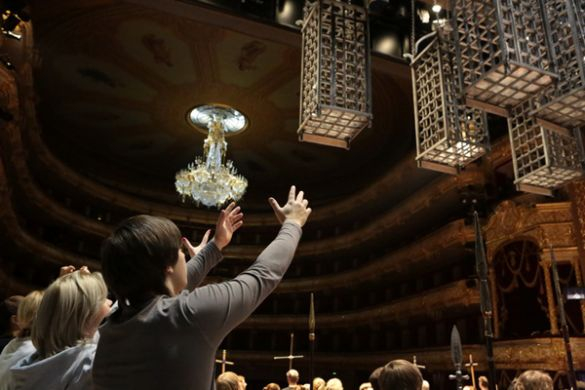 The work is the longest and possibly the most difficult of Verdi's operas.

The Bolshoi first staged "Don Carlo" in 1917, giving it just a single performance, one that featured the legendary bass Fyodor Chaliapin as Philip II. The opera next appeared in 1963, in a massive staging at the then newly opened Kremlin Palace of Congresses and played 199 times over the next 25 years. It has been absent from the Bolshoi's repertoire ever since.

Staging "Don Carlo" this time for the Bolshoi is celebrated British director Adrian Noble, who served as head of Britain's Royal Shakespeare Company from 1990 to 2003 and has since gone on to accumulate considerable experience in directing opera.

In a brief conversation last week, Noble noted the kinship between "Don Carlo" and the plays of Shakespeare. "Verdi was passionate about Shakespeare," he said, "and it seems perfectly natural to find an echo of Shakespeare in 'Don Carlo.' The opera is not so hugely different in respect to its form from Shakespeare's history plays. Furthermore, one finds in 'Don Carlo' an echo of those plays in its exploration of the relationship between the public self and the private self and of the debate about the nature of kingship."

The new Bolshoi production places "Don Carlo" in its original time and place, which Noble believes is the appropriate way to deal with operas that relate, or purport to relate, historical events. He sees his job as director as one of "making the story logical," in particular, by trying to recreate the "pressures" felt in the 16th century, among them, the pressure to kill people because of their religious beliefs.

Each of the Bolshoi's two alternating casts for "Don Carlo" combines Bolshoi regulars with guest artists from Russia and abroad. Both casts look quite promising. Of particular interest is the scheduled appearance in the first cast of internationally acclaimed Ukrainian-born soprano Maria Guleghina.

"Don Carlo" was due to be led by the Bolshoi's musical director and chief conductor of the past three years, Vasily Sinaisky. But just two weeks before the production's premiere, Sinaisky abruptly resigned his posts, citing an accumulation of unspecified disagreements with Bolshoi general director Vladimir Urin.

Taking Sinaisky's place and alternating on the podium at this week's performances will be a pair of young conductors, Robert Trevino from the U.S., initially Sinaisky's assistant in preparing the production, and Giacomo Sagripanto from Italy, both of whom seem already to have gained a fair amount of experience and success in leading opera.