YENAKIYEVO, Ukraine — In the Ukrainian president's eastern hometown, the buildings are grimy with black soot from the surrounding coal mines. The air is thick with pollutants. The men here die young, sometimes from industrial accidents.

And residents have about had it with the protesters who have besieged Kiev, the capital, and its central square — the Maidan — for three weeks.

"It is time to disperse the Maidan and force those sponges to work," said Alexei Dzhugastransky, a 46-year-old coal miner in Yenakiyevo. "While we are working at the mine and risking our lives, they are striking in Kiev and killing Ukraine."

The battle over Ukraine's future has deepened the divide between the western part of this nation of 46 million and its east, where most people still speak Russian, watch Russian television and see ties with their giant neighbor as essential for Ukraine's economic survival.

The protesters rose up against President Viktor Yanukovych after Nov. 21 when he spiked a deal for closer integration with the 28-nation European Union and decided to revamp trade ties with Russia instead.

Hundreds of thousands have rallied in Kiev on the past two Sundays, and some protesters have set up camp on Independence Square, known as the Maidan, to demand that Yanukovych step down.

Opinion polls show that the EU is more popular among Ukrainians than Russia, and many fear that the country's hard-won independence will be crippled if it moves back too tightly into Russia's orbit.

But in eastern Ukraine, the country's industrial heartland, most people are openly resentful of the pro-Western protesters, many of whom are students.

The Kremlin has exploited this deep east-west divide in its determined efforts to thwart the EU deal and keep Ukraine in its political and economic sphere of influence.

Yenakiyevo, a city of 100,000 in the Donetsk region, is home to nine coal mines, six of which are operational, along with a metallurgical plant and a coke plant.

Outdated equipment and poor safety standards make Ukraine's coal mines among the most dangerous in the world. At Dzhugastransky's Soviet-era mine, which is named after Karl Marx, a 2008 accident took the lives of 13 miners.

Pollution levels in Donetsk often exceed the officially admissible limit several times over. The average life expectancy for men in the region is 57 years, compared to the national average of 66.

The Donetsk region, which accounts for more than a quarter of Ukraine's budget revenues, depends on Russian markets and — most crucially — supplies of Russian natural gas. 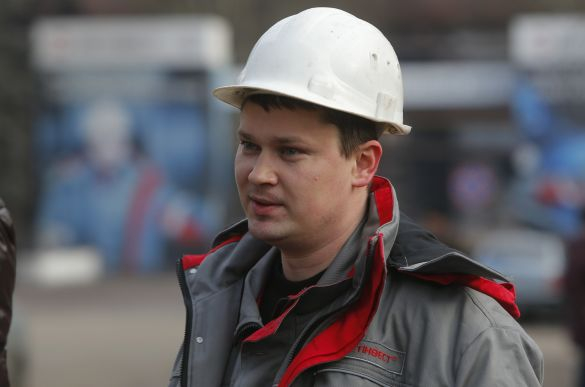 Vladimir Toporov, a foreman at the Yenakiyevo metallurgical factory.

"Depriving us of ties with Russia is like cutting off a leg," said 33-year-old Vladimir Toporov, a foreman at the Yenakiyevo metallurgical plant. "We will not be able to walk to Europe on one leg."

Ukraine's political standoff has been aggravated by its rapidly deteriorating finances. The economy has been in recession for more than a year, and the government is in desperate need of foreign funding to avoid a default. As talks stalled with the International Monetary Fund, Yanukovych has sought a bailout loan from Russia.

Nikolai Zagoruiko, the head of the Donetsk branch of Yanukovych's Party of Regions, said the proposed pact with the EU would have forced some the region's biggest mines and industrial plants to close, with major repercussions felt throughout the country.

"We would have had an explosion in society," he said. "And the students from the Maidan in Kiev, who have not earned a single kopeck yet, would have become the first casualties of the EU."

Donetsk is also home to Ukraine's richest man, Rinat Akhmetov, and other tycoons who have stood behind Yanukovych. Akhmetov funded the construction of Europe's biggest sports arena in the city of Donetsk, which hosted soccer games during last year's European championships.

Anti-government protests have taken place in many cities outside of Kiev, but in Donetsk, a city of 1 million, they have drawn only a few dozen people.

"We are isolated," said Volga Sheiko, a 38-year-old attorney who took part in a recent anti-government protest. "We are talking about freedom, democracy and integration into Europe, but no one hears us. Even if there are some who support integration into the EU, they are simply afraid to say so out loud. It is not quite safe here in the east."

Yanukovych had assured the EU of his firm intention to sign the political association and free trade agreement, but abruptly changed his mind just a week before the scheduled signing in late November.

This was seen as a victory for Russia, which had imposed import bans on some Ukrainian goods and threatened further trade sanctions to demonstrate the damage Moscow could inflict on Ukraine's economy if Yanukovych signed the EU deal.

Russia also promised Ukraine a rebate on Russian natural gas supplies and other privileges if it agreed to join the Russia-dominated Customs Union, a trade bloc of former Soviet republics that includes Belarus and Kazakhstan.

A meeting between Yanukovych and President Vladimir Putin last week has raised fears that Ukraine is on the verge of joining the Customs Union, a step that would almost certainly enrage pro-EU Ukrainians and energize the protests in Kiev.

But in the east, most people see Russia as the partner of choice and heed the Kremlin's warnings that the EU pact would rupture trade ties with Russia and lead to economic collapse.

"Belarus, Russia and Kazakhstan are our brothers. Why should we leave them?" said Yuriy Galaburda, a 43-year-old miner in the town of Ukrainsk.

Unlike Yenakiyevo, where most of the mines and plants are active, Ukrainsk has just one mine in operation. With about 10,000 residents, the town is half the size it used to be. Many of its Soviet-era apartment buildings are abandoned, their windows broken. Packs of stray dogs roam the streets.

Galaburda said the town had seen even worse times after the 2004 Orange Revolution protests that led to a pro-Western government in Kiev.

"We are afraid that it could get worse," he said. "Under the Orange government, we were not seeing any pay at all. Now life seems slowly to be getting better."