The opening of an anniversary exhibit dedicated to the future of the Taganka Theater ended in chaos when actors decided to protest the event, angered by what they felt to be a whitewashing of the theater's traditions.

The exhibit "Trying Alternatives," created by artist Ksenia Peretrukhina, aimed to rethink the space of the theater's foyer by exchanging old photos and listings with large texts containing thoughts about the theater's fate. It is one of five exhibits that will be displayed in the theater in honor of the Taganka's 50th anniversary.

Actors at the opening shouted phrases like "shame" and "the Taganka has a future," saying that the texts were offensive to them and the theater's legacy. The protest was largely made by the troupe's more senior actors, who protested what they felt was an invasion of young directors and dramaturges in creating the program for the theater's anniversary.

"What to do? What could happen at the Taganka Theater in today's situation? A strong new leader should come. Under no circumstances should a strong new leader come. Some time should pass. The theater should be closed, because without Lyubimov nothing of importance will occur. What to do?" wrote Peretrukhina in the foyer of the Taganka. Her texts displaced the portraits of Valery Zolotukhin, Leonid Filatov and Vladimir Vysotsky, famous stars of the Taganka.

The texts seem almost calculated to create a furor among the theater's troupe, touching on sensitive issues such as the potential closing of the theater. It has been announced that the theater will undergo repairs in the near future, and actors fear that this may be used as an excuse to close the theater indefinitely or drastically change its function.

Taganka director Vladimir Fleisher attempted to calm the actors, saying "the renovations that you fear will take place in 2014-15 without interfering with the operation of the theater in this space … the space will function and the theater will develop." Fleisher also noted that the traditional photographs would be returned to their locations at the beginning of January. 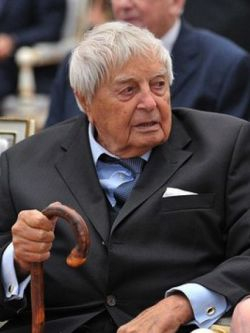 Another pointed suggestion was the mention of Yury Lyubimov, a star director who helped to found the Taganka Theater and led it from 1964 until 2011, when growing conflicts with the troupe and with the Moscow Department of Culture forced him to leave.

Since his departure, the Taganka troupe has ceased performing a number of Lyubimov's productions. Lyubimov has refused attempts to convince him to return to the theater and in March of this year expressed a desire to forbid the theater to stage his productions, saying that changes and abridgments had been made without his knowledge or permission.

Given that Lyubimov is now 96 years old, it seems unlikely that the theater legend will be able to return to the head of the theater he founded. However, as the Taganka troupe moves away from the Lyubiov productions that have long dominated their repertoire, it remains unclear what direction they will take, creating an uncertainty that the exhibit seems to highlight.

Peretrukhina, however, insisted that her exhibit was unrelated to the recent tumult at the Taganka, saying that the idea came from a project created at the School for Theater Leaders at the Meyerhold Center.

"The point is that everything will be taken off the walls except the portraits of current actors of the Taganka and four portraits — Vakhtangov, Meyerhold, Brecht, and Stanislavsky — which Lyubimov requested never to be removed," Peretrukhina said of the form of the exhibit to RIA Novosti, noting that actors from the theater had voted in favor of her proposal.

"The repertory theater agreed to create an art space, a second parallel stage, in their foyer for a year. This is a very big step, and I am pleased by the bravery of the artistic committee that made the decision," Peretrukhina said of the plans for the anniversary exhibits.

However, while the theater's leadership may have approved the plans for the exhibit, Peretrukhina acknowledged that many members of the troupe had difficulty appreciating the concept: "Of course it is difficult for the theater to understand our work. One of the characteristics of a repertory theater is that it insists on its total isolation."

By openly carrying placards and shouting protest slogans at the exhibit opening, the Taganka troupe seems to be abandoning this isolation in favor of open squabbles, and it remains to be seen what changes the anniversary year will bring.