While headline-grabbing groups like Pussy Riot and Femen may be the most visible symbols of feminism in the former Soviet Union, Moscow-based artist Aidan Salakhova has been quietly promulgating her own brand of Islam-influenced feminist thought for the past 20 years, building a significant fan base both in the West and in the Middle East.

While her exhibit "Out of Body" recently closed after a successful run at the Cuadro Gallery in Dubai, Aidan recently spoke to The Moscow Times about her art and her thoughts on the contemporary art scene in Moscow.

"I first worked with Cuadro Gallery two years ago as part of a large group exhibit — this time I had a large solo exhibit there," Salakhova said, adding that her art had been well received by the local community.

Salakhova has expanded her own artistic activities in the past year, since announcing in April 2012 that her long-standing Moscow gallery, long a center of the contemporary art world and an incubator for developing talent, would cease its activity as a commercial art gallery and become solely a studio and space for working with her students from the Surkov State Art Institute.

"The result is marvelous — I'm not occupied with the gallery anymore, I work on my own art and with my students," Salakhova said of the change, adding that there simply was no market for contemporary art in Russia and that she had gotten tired of running the gallery and struggling to find clients and turn a profit.

"I first decided to close the gallery after visiting China," Salakhova said. "Our countries were in similar situations after perestroika, but there they have so much government support, so many galleries and museums are opening." 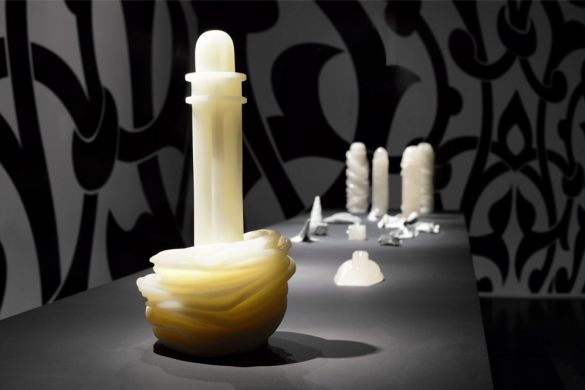 Phallic sculptures of minarets were among the works in Aidan's most recent exhibition in Moscow this year.

This comparison between the two countries led Salakhova to conclude that the Russian art market was not developed enough to support a gallery like hers. As to the reasons for this lack of development, she was reluctant to blame the financial crisis, the reason given by many artists for poor sales.

While Salakhova acknowledged that the crisis had exacerbated the situation, she credited the "low level of culture" in the country as the fundamental cause for the moribund market. Despite this, Salakhova has shown little interest in leaving the country in the past.

"I've always thought it would be easier to work abroad, but I've always been a patriot, though now I'm having some doubts" Salakhova said. Born in Moscow, Salakhova actually comes from a prominent Azerbaijani family — her father, Tahir Salakhov, is currently vice-president of the Russian Academy of Arts and has received numerous awards as an artist from the governments of both Azerbaijan and the Russian Federation.

Aidan has had a mixed relationship with Azerbaijan in the past — while many of her pieces appear to be influenced by Islamic art, they also contain sexual overtones that some in Azerbaijan have found offensive. In 2012, works by Salakhova were selected for Azerbaijan's pavilion at the 54th Venice Biennale, yet the works were removed on the request of the Azerbaijani government after Azerbaijani President Ilham Aliyev toured the pavilion, shortly before it was to open to the public.

Despite this, Salakhova expressed no resentment and remarked that she had noticed a lot of government investment into infrastructure on a recent trip to Azerbaijan that she credited to Aliyev, who was recently elected to a third term. "You can't expect a politician to be an expert on art," she said of the Azerbaijani president, instead blaming festival organizers for the spat in Venice.

While Salakhova was not overly enthusiastic about the label "feminist art" that is frequently applied to her work, she said that her art was "about all women," adding that she did not consider her work to be in any way Islamic art.

While Salakhova is currently resting after her Dubai exhibit and a busy year, she is still working on new projects and experimenting with new mediums such as video and performance art — fans can probably expect to hear about some interesting new projects in the new year.