AKHSHTYR, Krasnodar Region — Trucks rumble to the edge of a gigantic pit filled with spray cans, tires and foam sheets, and dump a stream of concrete slabs that send up a cloud of limestone dust. Other trucks pile clay on top and a bulldozer mixes everything together in a rudimentary effort to hide the mess. This landfill outside Sochi, which will host the Winter Olympics in 100 days, is smack in the middle of a water protection zone where dumping industrial waste is banned.

As a centerpiece of its Olympic bid, Russia trumpeted a “Zero Waste” program that promised the cleanest games ever, saying it would refrain from dumping construction waste and rely on reusable materials. But on a visit last week to Akhshtyr, just north of Sochi, The Associated Press found that state-owned Russian Railways is dumping tons of construction waste into what authorities call an illegal landfill, raising concerns of possible contamination in the water that directly supplies Sochi.

The finding shows how little Russia has done to fulfill its ambitious green pledges. Its $51 billion budget for the Olympics contains no provisions for treating construction waste.

In a letter obtained by the AP, the Environmental Protection Agency, or EPA, in the area where Sochi is located told the Black Sea resort’s environment council in late August that it had inspected the Akhshtyr landfill and found “unauthorized dumping of construction waste as well as soil from excavation works.” The agency said it had fined Russian Railways, whose Sochi project costs billions of dollars, $3,000 for the dumping. It did not order the dump closed.

The EPA’s Sochi representative visited the site earlier this month and insisted it was being cleaned up, villagers and activists who were present at that meeting said. The agency was unavailable for comment this week.

The main health concern surrounding the landfill is to the water supply.

Authorities confirm that Russian Railways operates the Akhshtyr dump without a license — but it would not be able to obtain one even if it tried. That is because the village lies in an area where dumping construction waste and soil is forbidden under the Russian Water Code. Moisture from the landfill seeps through porous karst rocks into underground springs that feed the nearby Mzymta River, which provides up to half the water supply in Sochi.

“Water from here will be contaminating Sochi’s fresh water springs for the next 10 to 15 years,” said Vladimir Kimayev, a member of the Environmental Watch on North Caucasus.

Boris Golubov, a geologist with the Russian Academy of Sciences, said it was impossible to accurately judge the impact of the Akhshtyr dump without a chemical breakdown of the waste and a full geological survey of the rocks. He said, however, that the landfill’s location on karst is potentially hazardous.

“Whenever you start dumping something or dig, you have got to think twice,” Golubov said.

Russian Railways is building the most expensive piece of Sochi infrastructure, a 48-kilometer highway and railroad link between the airport and the Alpine venues that has already cost the government 270 billion rubles ($8.5 billion). President Vladimir Putin was in Sochi this week to inaugurate a train station that serves as a hub for the link ahead of celebrations Tuesday marking exactly 100 days before the opening ceremony. 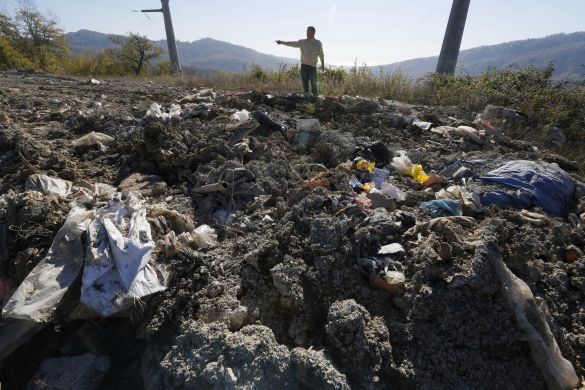 Akhshtyr village leader Koropov points at a garbage pile near his town.

The press office of Russian Railways’ construction unit, which is responsible for the road and manages the limestone quarry-turned-waste dump in Akhshtyr, said it paid the $3,000 fine in August. The company blamed the dumping on a subcontractor, insisting that the waste management firm had “rectified the violations” — even after being told that trucks had been seen dumping concrete and that the pit was still filled with construction waste.

Outside the crater the size of three football fields, villagers complain that trucks continue to bring in construction waste by night and soil by day — as they have been doing for at least three months. Russian Railways is not only dumping in the pit: Just outside the quarry’s fence, a plot of land it leases is strewn with broken helmets, plastic tubes, foam sheets and tires. Residents say they have been complaining to authorities about the ongoing dumping for months.

“Authorities are telling us that this quarry is illegal and that it has been closed, but you can see that it is still here,” village chief Alexander Koropov said. “We do not know what to do. We would like to petition God, but we have not got his address. He is the only person we have not petitioned yet.”

To compound Akhshtyr’s problems, the village’s wells dried up as the road project got underway, depriving it of its own water source and forcing it to rely on weekly deliveries in large cisterns. Local officials concede that wells began to go dry as soon as construction started, but will not place blame.

Dmitry Kozak, the deputy prime minister in charge of the preparations for the games, has persistently dismissed claims that Sochi is failing on its green commitments. Speaking to reporters this year, he admitted “certain violations,” but denied claims that trash still gets dumped in illegal landfills. The only thing being dumped in Sochi, he said, is soil, a by-product of tunnel works. Kozak said the soil “only improves the landscape of the Sochi National Park and does not harm it in any way.”

Kozak spokesman Ilya Dzhus said — after being confronted with evidence of last Friday’s dumping and the tons of waste that sit in the village pit — that “the situation in Akhshtyr is under control.” Environmental officials inspected the site this month and briefed the government on the results. “There are no significant violations of the law on storing hazardous waste to speak of,” Dzhus said.

Local officials said they have tried to clean up the dump, removing 300 tons of waste in all. But they would not address the evidence that it was still stuffed with waste Friday.

Russian Railways is not alone in dumping illegal waste. Just a couple of kilometers down the road from the Akhshtyr quarry, a dirt path leads to a tiny village cemetery on a hill. Ten steps away from the cemetery is an improvised dump the size of a small cottage with builders’ helmets, plastic packaging and slabs of concrete. Other illegal dumps dot the Sochi area.

The International Olympic Committee said “Sochi 2014 has given us every assurance of their commitment to games-time waste management.” The IOC said it receives “updates on Sochi’s work on its landfill remediation” during inspections, but that Olympstroi, the state-owned corporation that oversees all Olympic construction in Sochi, should be responsible for handling the waste situation in the pre-games period.

A spokeswoman for Olympstroi, who spoke on condition of anonymity because she was not authorized to comment, said it had no legal mechanisms to address complaints. She said law enforcement agencies and federal authorities should deal with them.

Not in the Budget

Despite the “Zero Waste” pledge, there are no provisions or programs in the budget for treating construction waste. A decree signed last May by then-Prime Minister Putin repealed a set of waste-related measures such as the construction of recycling facilities from the national Olympic preparations plan, leaving responsibility to the city administration. In January, Sochi officials issued an official strategy on waste treatment that cast aside plans for recycling waste and ruled that burning unsorted trash is the “most forward-looking” solution.

There is only one small recycling plant for household waste in Sochi. It processes about 150 tons of glass a year — and no industrial waste. Waste treatment facilities elsewhere in Russia typically take in hundreds of thousands of tons of waste every year.

Rashid Alimov, coordinator of the toxic waste program at Greenpeace Russia, says “the Zero Waste program is not being implemented in Sochi.” He said Sochi authorities were interpreting “Zero Waste” to mean getting waste out of sight.

In Akhshtyr, the euphoria of clinching the Winter Games has long since turned to anger.

“We had high hopes for the games. We were all very happy, and we believed the president when he said that not a single village would be affected [by construction],” Koropov said. “But you can see for yourself what happened.”