Surrounded by railroads, industrial estates and giant cooling towers from a local thermal plant, the Western Biryulyovo district where riots broke out Sunday oozes its own sense of disunion from the rest of Moscow — and residents say it has become a hostage to its own growing marginalization.

"If you want to have a trashy life, move to Biryulyovo," local residents say with a sense of both irony and despair. When many of them were allocated apartments in the district in the late 1960s to 1970s and this southernmost part of Moscow was just beginning to be developed, this saying was not yet in vogue.

But gradually the area became industrialized, with numerous factories complemented by a large market and vegetable warehouse, a facility that later turned into a magnet for migrant workers from the Caucasus. With no metro and only one highway linking the district to the rest of Moscow, the area quickly became isolated, making matters worse.

"When I tell people where I live, many of them do not event recognize if it is Moscow or not, and the thing is, I tell them that it is not," says Marina, 52, a Biryulyovo resident since 1974. "Instead, it's a sewer, Moscow's sewer, where the government has put all the waste."

"I fought in Afghanistan and came back, and today young 20-year-old boys get stabbed in their homes here," Anatoly, 49, said, referring to the killing of a young man that sparked the recent unrest. 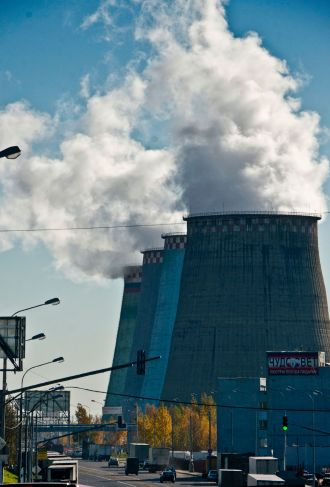 Cooling plants at a local thermal plant in the Western Biryulyovo District.

Following Sunday's riots, many local residents Monday returned to the Biryuza shopping center, which was looted by protesters over night, to speak to the press and discuss the situation.

And while all of them had their own story to tell, there was a consensus among the crowd about  who to blame for Biryulyovo's marginalization.

"If you want to make life better here, you have to close the vegetable warehouse," said Lyudmila, 60, a local resident since 1990. "You do not realize, they [migrants from the Caucasus] have their own world here: their own banks, restaurants and hotels."

The warehouse, which served as the main target for protesters' outrage Sunday due to its reputation as an employer of migrant workers, was heavily protected Monday morning as a few Central Asian workers placed barbed wire on top of the fence. 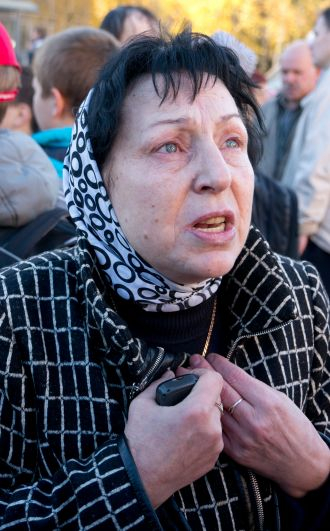 When asked who controls the overall situation in the district, the residents said it was "people on the top" of the government, who they say get money from migrants in exchange for protection — an allegation that has been made before.

In July, some residents in western Moscow made the same claims after clashes at the Matveyevsky Market between police officers and vegetable sellers from the North Caucasus.

Unlike the rest of Moscow on Monday, Biryulyovo looked strikingly homogeneous, but locals said this was highly unusual.

"They [migrants] usually dominate the visual environment here," said Marina. "They tell us, and they told me personally, that we must leave Biryulyovo because we are nobody here."

Today, Biryulyovo, which has almost 90,000 residents, is Moscow's cheapest district for real estate, with the price per square meter running at $3,800 compared to Moscow's average of $5,100.

The low real estate prices have made the area attractive to people with low incomes, including migrants.

During Soviet times, the district had many student dormitories, which invited students from the rest of the other republics to come and settle in Moscow.

While ethnic cleavages were largely contained before 1991, Russia has undergone a wave of intensified nationalistic sentiment following the collapse of the Soviet Union.

And most residents in Biryulyovo said the situation would likely get worse.

"This is not the end," said Marina. "The Russians are slow starters, but they drive fast."

Yet, Michael, 25, and Dennis, 25, two migrant workers from Nigeria, seemed to be unfazed by the situation while they stood at a distance from the crowd on Monday.

"Yeah, we heard some stuff happening here yesterday, but we did not get involved," Michael said in English.

"It is a nice neighborhood," Dennis said.