As part of the ongoing Best City on Earth Festival, organized by the Moscow Department of Culture, two foreign street artists have been brought to Moscow to work their creative magic on the capital's streets. Through the assistance of the Street Art Museum in St. Petersburg, the artists Escif and Eduardo Kobra have come to Russia to show off their talents. 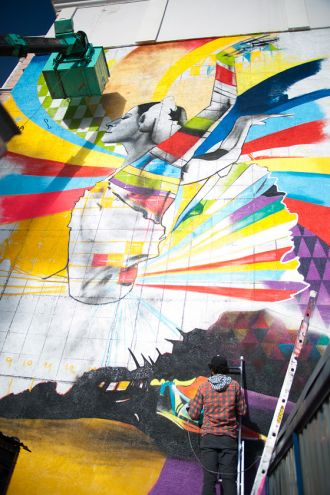 A mural near the Bolshoi Theater will show ballerina Maya Plisetskaya.

"Culture department head Sergei Kapkov gave us the task of 'enlivening' the city with street art and graffiti," said Ivan Panteleyev, director of the Novatek Art company, in a press release. "For this reason, we are attracting not only the best international artists, but also curators who can handle these bright and surprising art projects." Panteleyev welcomed the partnership with the Street Art Museum, stating his hope to attract works "that will create a resonance throughout the world."

While both foreign, the two artists have widely differing backgrounds and styles: Escif, a Spanish artist from Valencia, prefers to avoid publicizing himself, insisting that the works should belong to the local population and that interviews and social media posts only aggrandize fame for the artist. His murals are filled with text and wry wit, referring to urban problems like vandalism and consumerism, and can be seen in cities as far apart as Poznan and Los Angeles. His painting in Moscow, called "Hand," continues the themes that the artist has used in his previous works.

Brazilian artist Eduardo Kobra brings a palette of extremely bright colors from his native city of Sao Paolo. Known for mixing sculpture and fresco, Kobra is best known for a series of murals in which he painted historical images of how streets had appeared in the past. The Brazilian has constructed a similar project here in Moscow.

"I want to make for Moscow something that is connected to its culture," said Kobra. The artist, who worked on a wall close to the Bolshoi Theater, created the image "Ballerina," a mural of famed ballerina Maya Plisetskaya.