The hundreds of savvy entrepreneurs who descended upon Moscow over the weekend came equipped with all the essentials: market plans, business cards, advertisement posters, flashy websites, effective elevator pitches and stylish outfits. They also brought with them more than 1,500 cats.

Enthusiastic, sometimes fanatical, cat breeders showed off their prized possessions at the capital's Crocus Expo exhibition center as part of the annual ExpoKot cat show. One of the largest in the world, the display featured more than 30 breeds and prices going up to thousands of dollars per kitten. 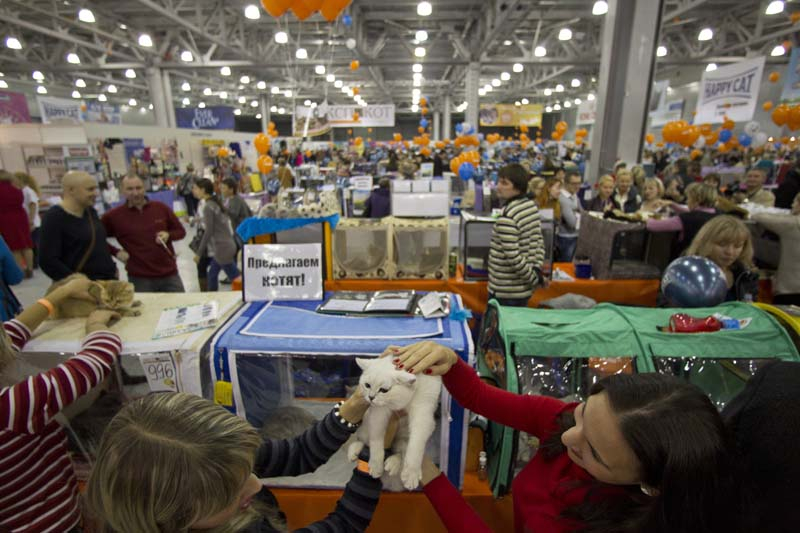 
But while potential buyers poked luxurious cat carriers with their fingers and rolled eyes at the high prices, breeders bemoaned the difficulty of making their business profitable. Yet despite poor or negative returns, it is too fascinating for them to abandon it. 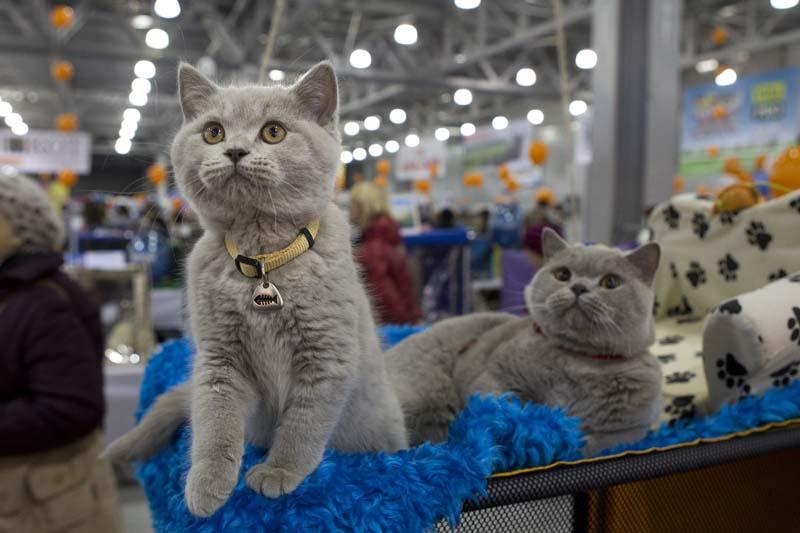 Russian breeders are not alone in their financial struggles. Cat breeders in the West also describe their work as a break-even business. Profits only come with an exceptional reputation in the field and a large-scale nursery.

Anna Kharchenko, a Moscow-based accountant who also maintains a nursery for wild-looking Kurilian Bobtails, said she viewed cat breeding as a hobby and not a business because it is not cost-effective. 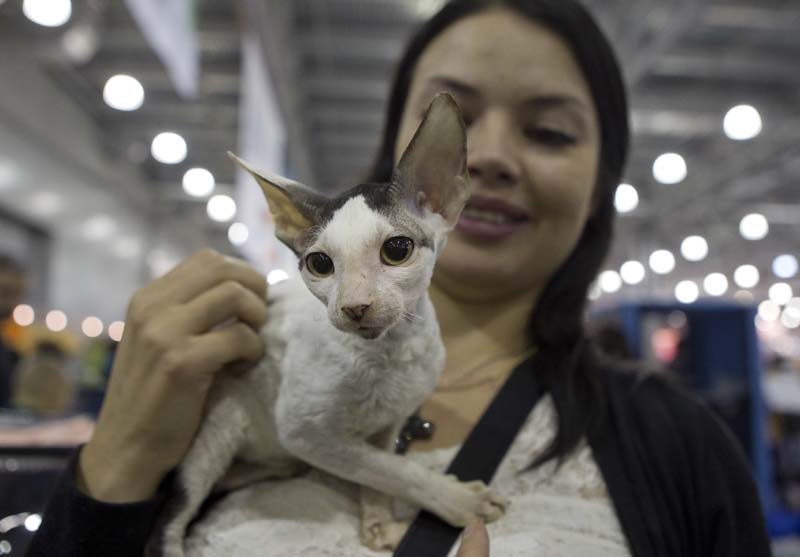 A proud owner with her Sphynx, known for its lack of coat. (Igor Tabakov / MT)


"If you take my breed, for example, and you add up all of my costs and compare that to the prices of kittens, there is no financial justification for this at all," she said. 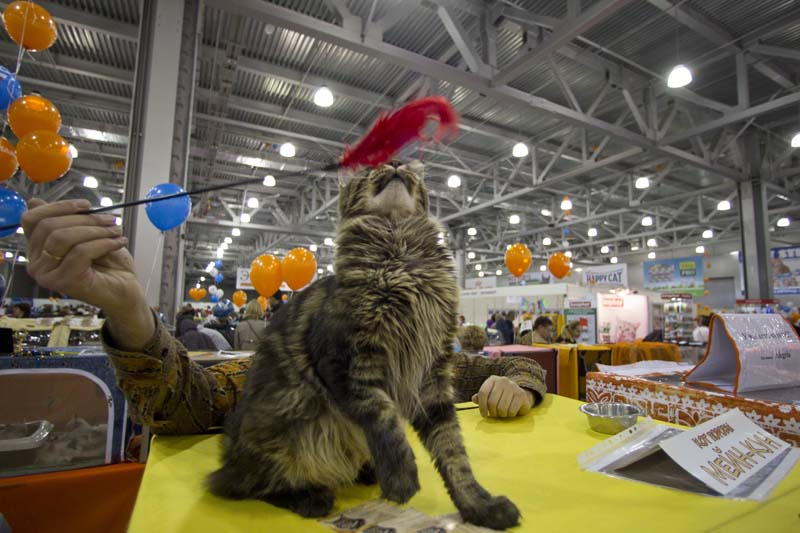 A Maine Coon being amused by a feather. (Igor Tabakov / MT) 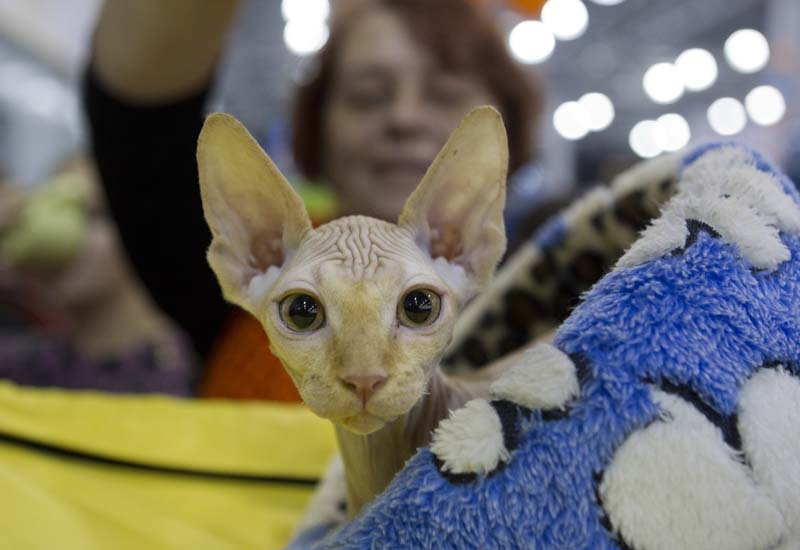 The Sphnyx is one of the most expensive breeds. (Igor Tabakov / MT)

The high maintenance costs for pedigree cats, however, can easily cancel out the revenues from these sales. The cats' gourmet tastes alone cost their owners at least 1,000 rubles per month. 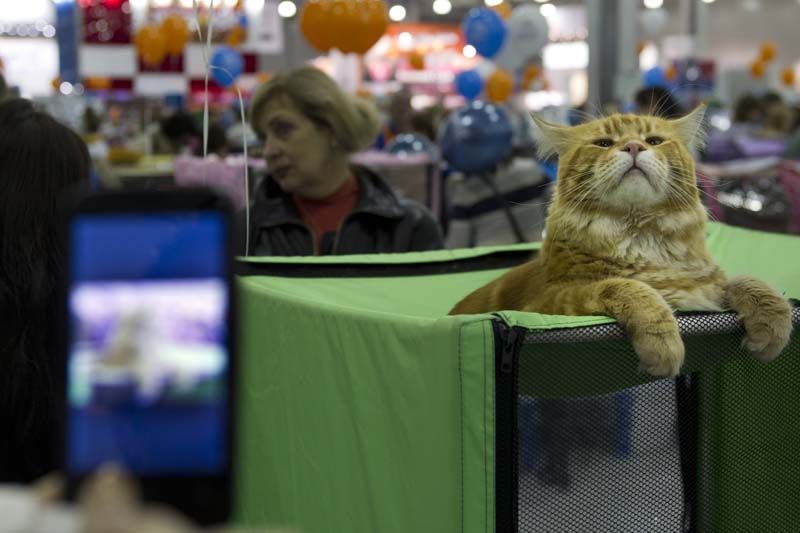 At cat shows, the animals are rarely taken out of their cages when not being judged. (Igor Tabakov / MT)

Tatyana Yemelina, a breeder from Saratov, feeds each of her four British Shorthair and Scottish Fold cats premium-class dry food and a kilogram of beef each week. The kittens also get regular servings of dairy products, such as cottage cheese. 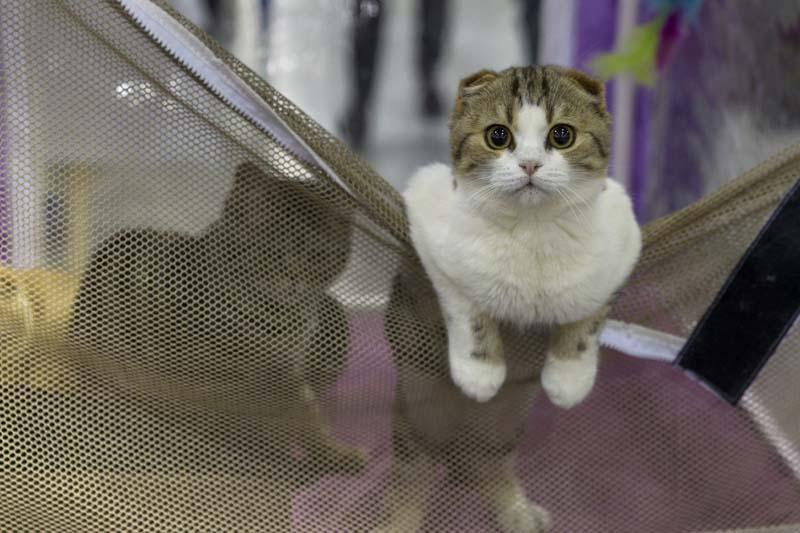 "If you put together the annual spending on a nursery and the theoretical revenue that you might get from it, you barely cover your expenses. People think that it is a business, but it is not," Yemelina said, adding that she had to cut the number of adult cats she keeps from nine to four in recent years because of the financial burden of keeping them and her family's dwindling enthusiasm for caring for them. 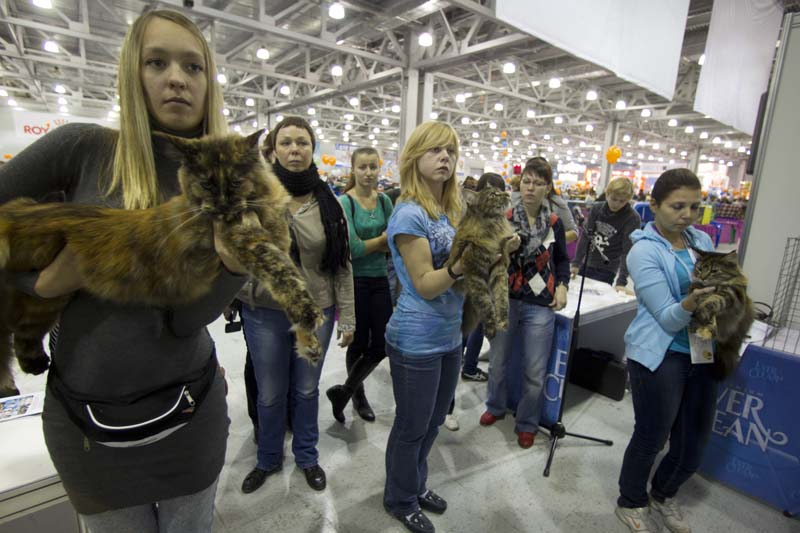 Breeders in line to show their Maine Coon cats to the judges. (Igor Tabakov / MT)

Breeding dogs would be easier, Yemelina said, because they are less demanding about the quality of food they eat. Several cat breeders at the event claimed that dog breeding would be the more profitable business to be in, pointing to the cost of food as one factor.

Kharchenko is equally picky about her cats' diet despite the high costs. She treats her cats with vitamin supplements and real meat "so good that sometimes I would not even give it to people." 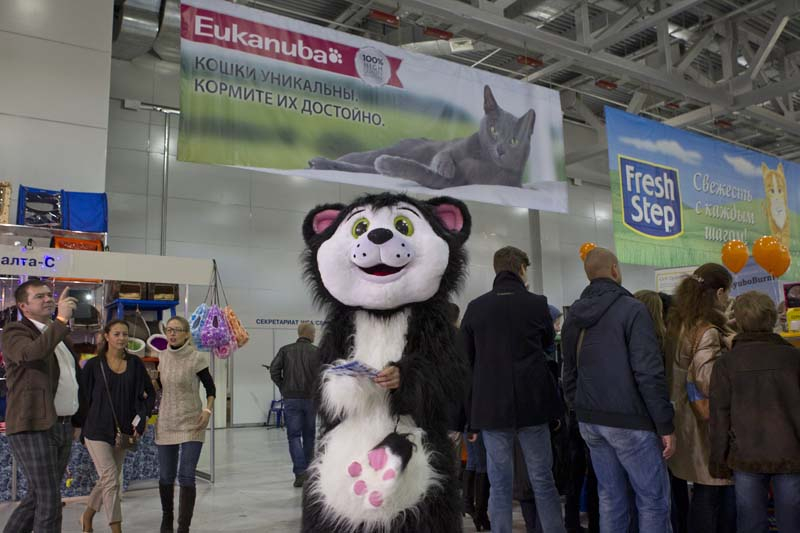 Pet food is of the largest expenses for cat owners, and advertised heavily at the expo. (Igor Tabakov / MT)

In another example, Yury Krylov from the Moscow region is so insistent that his Maine Coon cats look spectacular at exhibits that he spends over $100 to groom them with special cosmetic potions ahead of every show. 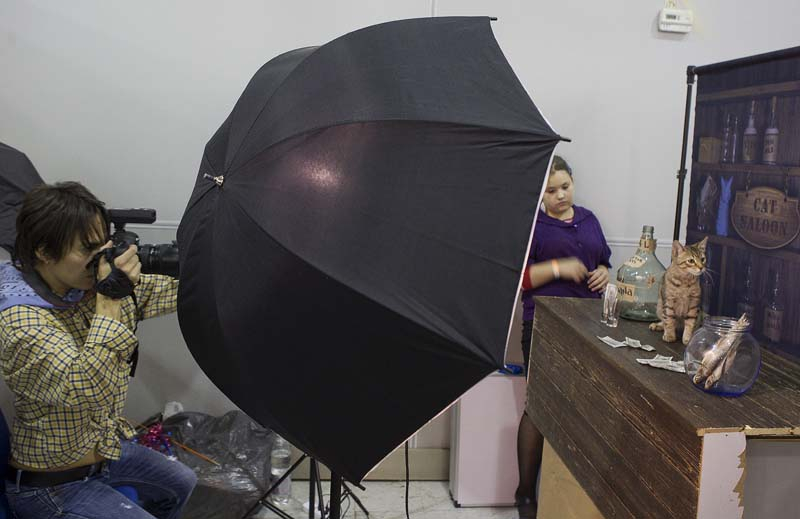 A cat making faces as it is put through a photo session. (Igor Tabakov / MT)

Participation in cat shows is a necessity for professional breeders as a way to prove their cats' value, promote the species and get some acknowledgement within the community. And that feeling of gratification does not come at a low price. 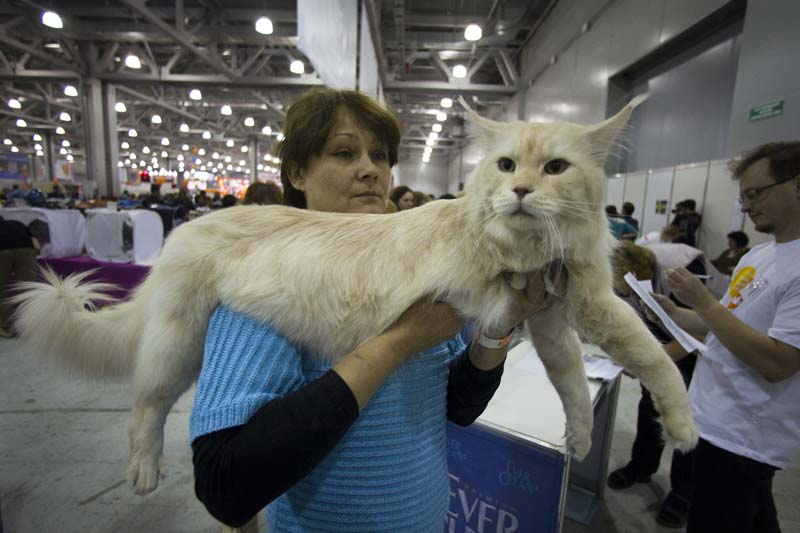 The Maine Coon, above, is one of the largest breeds of domestic cats. (Igor Tabakov / MT)

Krylov paid 3,000 rubles to bring his beloved pet to ExpoKot — a small investment compared to the 25,000 rubles he spent to go to a similar two-day show in Vitebsk, Belarus. 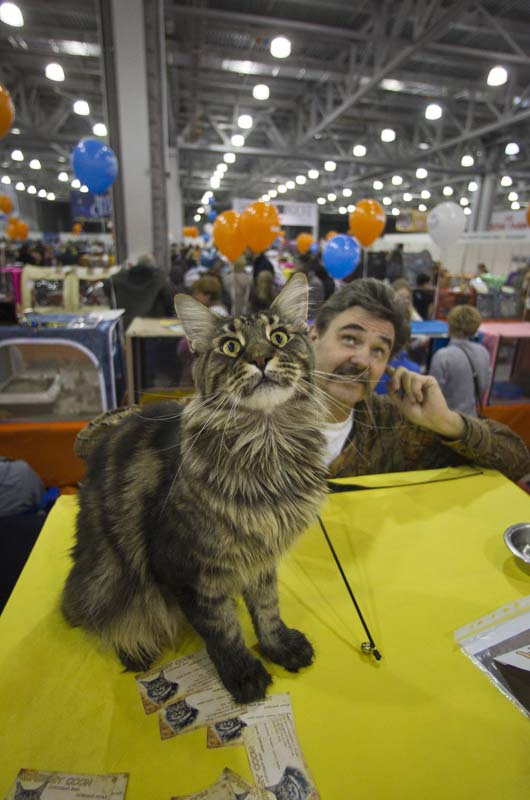 It is often said that owners and their pets begin to resemble each other after a while. (Igor Tabakov / MT)


At the same time, breeders said that having their cat dazzle the audience at an exhibit does not increase the price of the champion's offspring or have a direct effect on total sales. 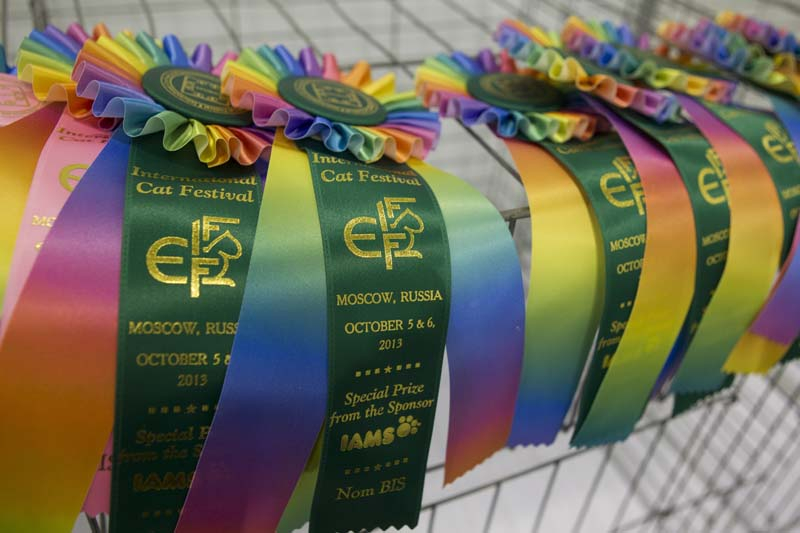 Some of the award ribbons given out during at the competition. (Igor Tabakov / MT)

"That is not why people buy them," Vadim Sedyakin said of the award ribbons.

Sedyakin manned his Abyssinian cat booths, while his wife was escorting one feline through various rings where cats are professionally judged on how close they are to their breed standard, and lamented the amount of time — and furniture — he has sacrificed for her unusual hobby over the past three years. It cost the couple 18,000 rubles to exhibit a pair of cats and put another two kittens up for sale at ExpoKot, he said. 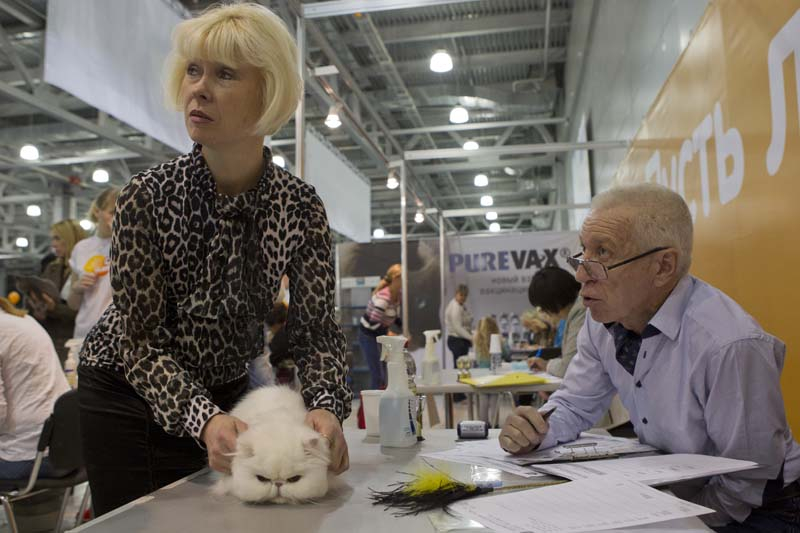 A Persian cat going through the judging rings with his owner. The rings are where judges rate the animal on how closely it is to the breed ideal. (Igor Tabakov / MT)

Cat show accolades can add to the prestige of the breeder, but then that respectable breeder has to watch how potential clients snatch up cheap offers on Internet sites from dishonest merchants, Krylov said. Maine Coon kittens sell for as little as 3,000 rubles on Avito, a local auction website similar to eBay. Their breeders do not participate in exhibits or provide documentation to prove that the cat is a pure breed. 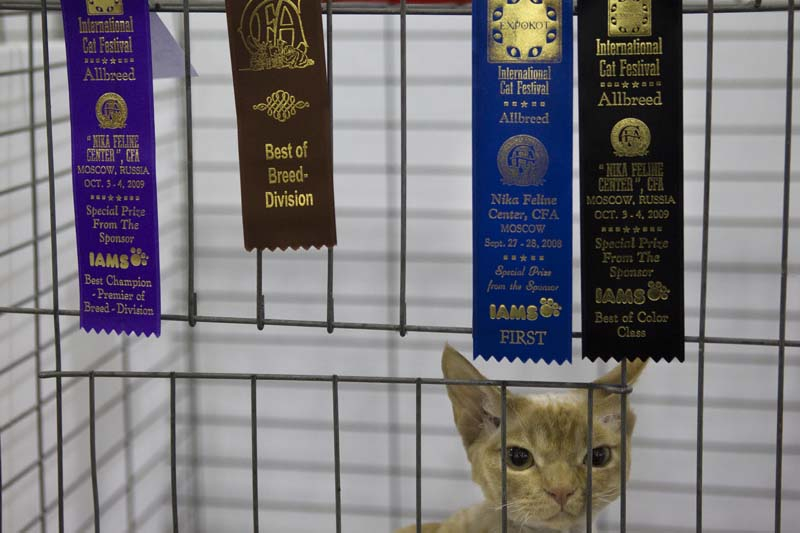 Ribbons for the champions don't increase sales or price of the champion's kittens, but professional breeders still participate contests for the prestige it brings. (Igor Tabakov / MT)

"Considering our economic crisis situation right now a lot of people try to buy what is cheaper, and what is cheaper is like cheese in a mousetrap," Krylov said. "Some breeds cannot be below a certain price range." 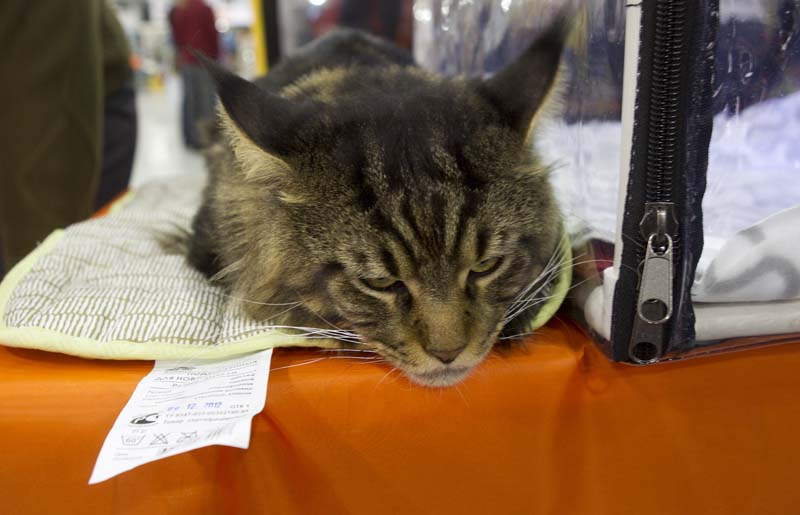 The cheap offers usually turn out to be mongrels instead of the regal pure breeds that they are advertised as, he warned. This fraud is a particularly sensitive topic for Krylov, who is passionate about maintaining breed purity. He said he has given up a room and a balcony in his apartment to house eight adult cats and eight kittens, which is all part of his ultimate ambition to breed the perfect Maine Coon. 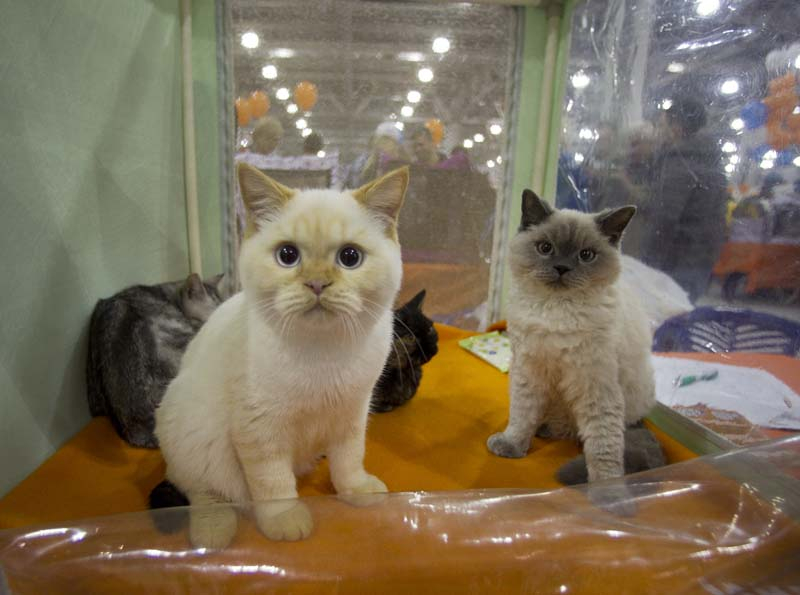 Other feline lovers were also undeterred by the small monetary returns on their work and said that they wanted to expand their collection. Svetlana Sedyakina kept looking over at a neighboring stand with longing as she joined her husband by the booth with a new award ribbon for their female Abyssinian. 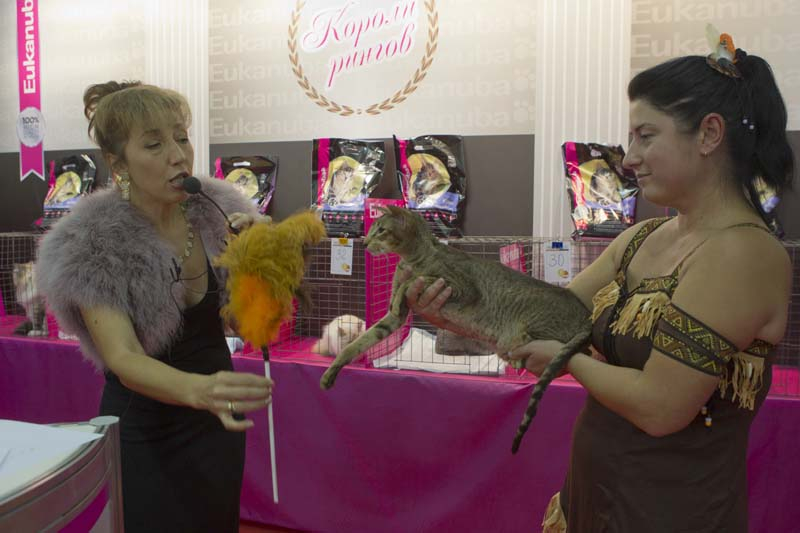 An Abyssinian cat being put through the judging process. (Igor Tabakov / MT)

"My mother knows that we left the house with four cats, two of them for sale. If we return with five, I think she would have a heart attack," Sedyakina said. 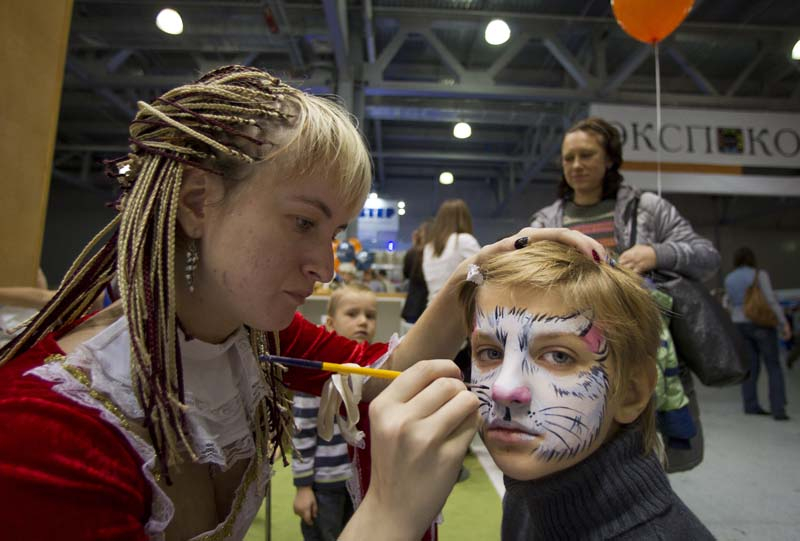 Some visitors to the expo even put on a feline face. (Igor Tabakov / MT)

"I am at wit's end here," her husband Vadim added worryingly. "This is a dangerous place."