Members of the Sochi 2014 Coordination Commission finished their final evaluation of the Black Sea resort on Thursday, just more than four months before the games' opening ceremony.

Their report was full of accolades and praise: "The organizers of the Sochi 2014 Games are busy with a number of initiatives aimed at bringing the event to life while also putting the final touches on preparations, as Sochi gets set to welcome the world in impressive fashion next year."

Unlike in previous reports, the IOC representatives were not just expressing their hope or confidence that the work would be done on time, but attesting to the fact that the facilities were already completed.

"We often say that there is no time to waste as the clock ticks down to the Opening Ceremony, and this still stands true," said Coordination Commission chairman Jean-Claude Killy. "But to see how far the local organizers have come over the last six years is quite simply remarkable — the competition venues are ready; the spirit of the Games is awakening here; and the athletes, spectators and all others who visit next February can expect a fabulous experience."

The comments likely came as a surprise to many in the area who had been affected by floods this week. 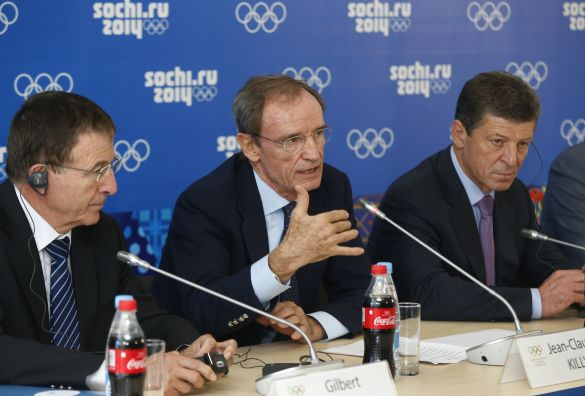 Jean-Claude Killy, center, speaking at a news conference on Sochi’s preparedness for the upcoming games.

On Wednesday, water disrupted traffic after flooding major intersections in the city, including the one that connects the airport to the city and the Olympic park.

But Deputy Prime Minister Dmitry Kozak said at a news conference that not a single Olympic facility had been damaged.

"There was an unprecedented storm yesterday in the city, but we have passed this test," he said, Interfax reported.

Sochi Mayor Anatoly Pakhomov also seemed to be brimming with optimism. "By the end of the day, we will have no vestiges of the storm left," he said.

Videos went viral on Thursday of trucks trying to clear the Olympic Park Circuit of water by pushing it into a sewer drain (watch video). The area — the future site of the Russian Formula One Grand Prix — was set to host demonstration laps Friday.

"These games are as shameful for Russia as they are for the IOC," said Andrei Rudomakha, the coordinator of Environmental Watch on North Caucasus.

"The IOC is responsible for this, because they accepted the worst bid. We believe that the decision was subject to corruption. Everybody realized at the time that it was a reckless scheme. Now, they are all in the same boat," he said. 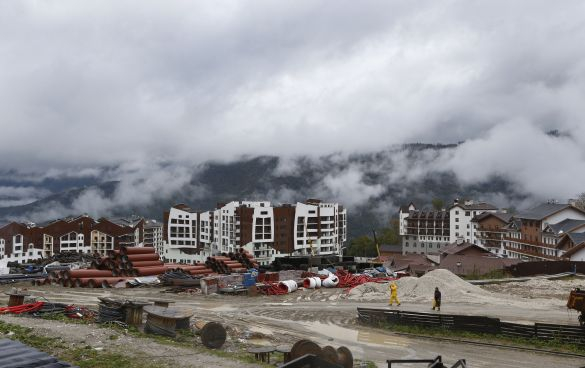 More than $50 billion has been spent on Olympic facilities and other infrastructure in Sochi in order to transform the summer resort into a year-long world-class travel destination. But the price tag has come under fire by many activists who say the facilities will not be accessible to ordinary residents after the games.

The IOC's statement did not contain any mention of criticism, including on the recently passed law banning "propaganda" of nontraditional sexual relationships among minors in Russia, a law that triggered a wave of international criticism, protests and threats of an Olympic boycott.

In response to a question about the controversial law at a news conference Thursday, Killy, a three-time Olympic champion, said: "As long as the Olympic Charter is respected, we are satisfied."

Among other things, the Olympic charter says that "any form of discrimination with regard to a country or a person on grounds of race, religion, politics, gender or otherwise is incompatible with belonging to the Olympic Movement."

The mission and role of the IOC and of national committees is "to act against any form of discrimination affecting the Olympic Movement," the charter says.

Rudomakha, who has reported on the construction of a ski resort allegedly built for Putin in the Caucasian National Preserve, slammed the Olympic Committee for their response.

"Everything is bad with the Olympic Committee; they have to fulfill their own Charter, but they don't," he said.

Vladimir Kimayev, who heads Sochi's branch of the Yabloko party, said that despite the IOC's statements, many of the Olympic facilities are not ready yet.

"The main stadium isn't ready, nor is the RusSki Gorki Jumping Center. I saw these facilities under construction with my own eyes just a few days ago," he said over the phone in an interview that was repeatedly interrupted due to water damage to his phone.

The water was not from the flood, he said.

News that Tbilisi is moving forward with the purchase of Russian-made subway cars has been met with outrage in Georgia, where dealings with the northern...