Art is work. Only some of the paint, blood, turpentine, sweat, corrugated metal and tears used by an artist ends up standing on a pedestal or hanging on a wall, but much more mess goes into a piece than can be seen in the static final product.

A new exhibition at the State Tretyakov Gallery on Krymsky Val, part of the 5th Moscow Biennale of Contemporary Art that began last week, attempts to examine all of the ways in which the work that artists do can be connected to broader themes of work in a project called "The Department of Labor and Employment."

Some of the exhibition's artists live up to its focus on activity by making audiences exert a little effort to experience their pieces fully. The gallery's second-floor foyer includes a screen that plays an instructional video and a small class of desks where exhibition-goers can try to assemble a contraption out of metal piping and learn to be plumbers.

Likewise, a piece from Anastasia Ryabova called "Your Money Works No More Here" requires viewers to climb elevated lifeguard-style chairs in order to view a movie where a pair of hands repeatedly smooths out a 1000 ruble bill.

The piece combines two of the exhibition's separate, if technically related, strands. Many parts of the show portray the process of work being done, either by passing that work on to the audience, showing artists in the act of creation or depicting the artist doing manual labor. These pieces are interspersed, however, among works that take labor and laborers as their subjects in a more traditional sense. Arseny Zhilyayev and Alexander Dolgov created a joint work featuring photographs of markets and an installation of the empty metal skeletons of market stalls as an ode to the places of business that have been disappearing from Moscow in recent years. 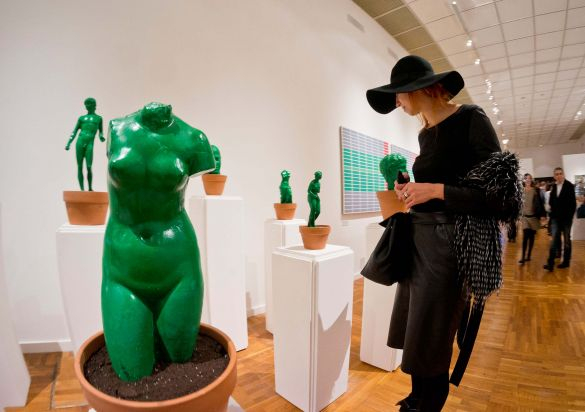 A Muscovite surveys art at "The Department of Labor and Employment."

The exhibition uses a very wide range of artists and mediums to illustrate a history of work from the past 50 years, also aiming to show how the changing concept of work has led to different artistic methods reflecting it. The parts of the exhibition that make audiences do a double take, however, are not the more stereotypically contemporary pieces with political messages, but the radically different styles of their creations on display.

Soviet oil paintings of construction workers from the 1960s contrast with a 2010 motorized machine from the group ''Recycle'' called "Processing" that continuously clumps sand together.

The exhibition also includes a series of plans for aircraft provided by the Central Aerohydrodynamical Institute, which includes wing designs and models of wind tunnel facilities. Though all tangentially related by the idea of "work," this ends up creating a different type of work for the viewer, who must do the mental gymnastics to switch his frame of reference and appreciate clay garden pots that have sprouted green versions of classical statues directly after viewing a "Delta Wing In Low Angle of Attack" where the "surface flow is shown by the oil dot visualization method."

The exhibit "The Department of Labor and Employment" will be open until March 30, 2014, at the State Tretyakov Gallery at 10 Krymsky Val. Metro Oktyabrskaya.