Bolshoi Theater artistic director Sergei Filin appeared at the theater Tuesday to help kick off its 238th season, nine months after being splashed in the face with acid in an attack that shocked the world.

Standing up at the event and looking around wearing protective sunglasses, Filin said he was "very happy to see everyone" before proceeding to talk about the upcoming season and introducing new dancers.

Filin was attacked Jan. 17 outside his Moscow apartment building by an assailant who threw acid on his face. One of the Bolshoi's top dancers, Pavel Dmitrichenko, is accused of ordering the attack, which police believe was carried out by two accomplices. He and his two co-defendants face up to 12 years in jail if convicted.

The fact that a Bolshoi dancer was implicated in the attack, which made headlines worldwide, sent tremors through Russia's premier theater and the nation's entire artistic community.

Media reports have speculated that Dmitrichenko wanted to exact revenge for his girlfriend, Anzhelina Vorontsova, whom Filin had passed over for important roles. Some observers pointed to former Bolshoi dancer Nikolai Tsiskaridze as having inspired, if not masterminded, the attack, an accusation he denies. 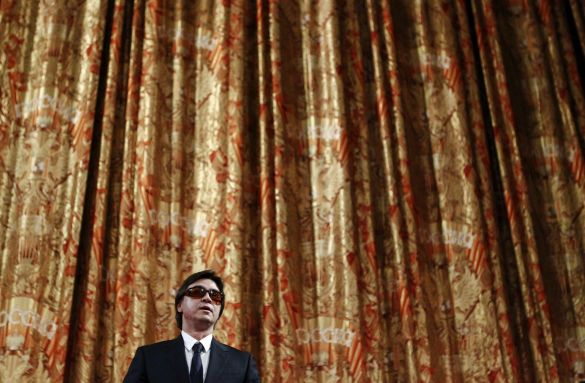 Filin attending a meeting with dancers at the Bolshoi Theater on Tuesday to open the theater’s 238th season.

Speakers at Tuesday's event acknowledged that the theater had experienced difficult times but said they were focused on the future and continuity within the theater.

After the attack, Filin traveled to Aachen, Germany, for recovery, and underwent 22 operations on his eyes and face. Bolshoi Theater spokeswoman Katerina Novikova said in June that Filin could not see out of one eye at all and that his vision in the second eye was severely damaged. She had no updates as of last week.

Filin said Tuesday that he was "feeling well" and that his treatment was continuing. He said his work schedule would depend on how his treatment went.

The opening of the fall season comes after a series of high-profile departures from the theater's leadership, including Anatoly Iksanov, the former director of the Bolshoi, who left in July.  Iksanov was succeeded by Vladimir Urin, who was previously the director of Moscow's Stanislavsky and Nemirovich-Danchenko Musical Theater.

Speaking Tuesday, Urin said that he did not come to the Bolshoi "to cause a revolution" and that he would be keeping the team the theater had.

Urin previously announced a delay in the opening of the new season, which he attributed to technical issues.

Reports of financial mismanagement have plagued the theater ever since it underwent a massive renovation, which was completed in 2011 at an estimated cost of $680 million to $1 billion or more. In June, police opened a new embezzlement investigation in connection with the reconstruction.

Widow Claims Russian Officer Killed Himself Due to Mobilization Pressure

The widow of a Russian colonel who shot himself at a conscription center in the Russian Far East earlier this month has blamed his suicide on the pressure...