KHABAROVSK — This Far East city continued its battle against massive flooding on Sunday, as the regional government announced that the Amur River was rising at a slower pace, reaching 727 centimeters by mid-afternoon.

But while Khabarovsk residents will likely be relieved that the average water level has fallen — down from 14 to 17 centimeters per day to 3 centimeters — many are now faced with the difficult task of rebuilding, a task which may be put on hold as weather forecasters warn that the situation will get worse later this week.

Water levels are expected to rise to 780 centimeters by the end of August and up to 830 centimeters in September, Interfax reported.

And as authorities work to keep the situation under control, with soldiers building dams around the clock and police officers on guard in areas that have been blocked off, residents must wait for the flood waters to disperse before they can assess the damage.

The regional government plans to issue compensation payouts of between 50,000 rubles and 100,000 rubles, with a special commission set up to assess property damage and decide on corresponding sums of compensation. Residents whose property was most severely damaged may be provided with temporary public housing, Komsomolskaya Pravda reported Sunday, citing Vyacheslav Shport, the region's acting governor.

Sixty-five villages in the Amur region remained flooded Sunday, though five saw flood waters dissipate and about half of the population was already given compensation funds, RIA Novosti reported Sunday. 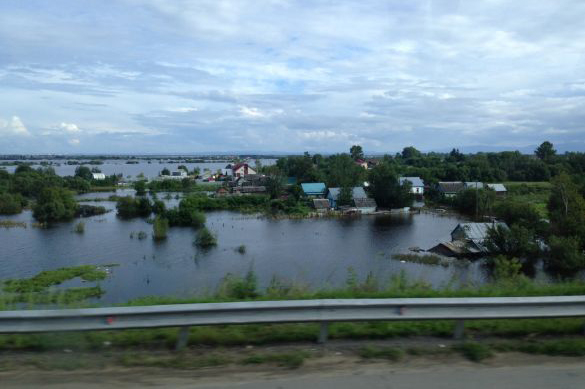 Houses near the coast of the Amur River have been submerged in water, as more rain is predicted later this week.

The Jewish autonomous region saw 20,000 hectares of farmland damaged across 23 villages, and more than 8,000 residents were evacuated from the area since the flooding started.

In the neighboring Khabarovsk region, more than 700 homes in 30 different villages have been flooded, along with 979 plots of farmland.

The Healthy Ministry, Emergency Situations Ministry and Federal Consumer Protection Service have all coordinated efforts to minimize the fallout from the floods.

Fifty-four evacuation centers have been set up throughout Khabarovsk, and a field hospital of the All-Russia Center for Disaster Relief arrived in Komsomolsk-na-Amur on Sunday at the order of Health Minister Veronika Skvortsova.

Teams from the Federal Consumer Protection Service are also on site to monitor the quality of drinking water, and 24 doctors were dispatched to Khabarovsk by the Emergency Situations Ministry to provide vaccinations to residents to avoid any outbreak of illnesses.

As of Saturday, 1,902 residents had been evacuated, although the Emergency Situations Ministry said many residents were still refusing to leave their homes.

Many Khabarovsk residents seemed agitated while they waited for the situation to stabilize. While the local state-run TV station showed a half-hour long interview with the incumbent Khabarovsk mayor Alexander Sokolov, who is up for re-election in two weeks, people gathered on top of a central cliff to watch the incoming tide from the river.

Maya, 68, lived in Khabarovsk her whole life. She saw firsthand how the city was transformed into the capital of Russia's Far East, but she could not recall any disaster of such proportions.

"I used to have a dacha on one of these islands in the middle of the Amur — the ones you can now barely see," she said. "It's all irrecognizable now; where is the sandy beach that used to stretch 15 meters into our river?"

The center of the city has been mostly unscathed from the flood, but the main embankment of the river and several streets have been closed off by police while soldiers build dams to prevent more water from flowing in.

Some local business owners have been cut off from their businesses as a result of the flooding, and they are eagerly waiting for the waters to subside so that they can rescue what's left.

Yulia and Valentin, who run a veterinary clinic on one of the streets that has been blocked off,  said their business was at stake for various reasons.

"We had to shut down our business for an indefinite amount of time, and we may lose not only our clients, but all of the equipment in the clinic is at risk too — and there's no way for us to get to it now," Yulia said.

After crossing the 3.9-kilometer Khabarovsk bridge, one of the pivotal elements of the Trans-Siberian railway, it becomes clear that some people were hit even harder by the flooding.

In the vicinity of the Telman village, railroad workers are busy installing fortresses of sand and stone in order to protect the local railroad and the village. One of the workers, Marina, manages several excavators that re-surface the flooded section of the road to ensure access to the village.

"We had already built dams here, but one of the women broke a dam to protect her own garden. So now everybody has to suffer," she said, highlighting the dependence of many local people on their own private gardens for nourishment. Many of the gardens have been wiped out by the flood.

Local ecology activist Alexei Ermoskin said that too much water may have been kept in the hydroelectric plants' water reserves upstream, making matters worse.

"I am not a specialist, but this is entirely possible," he said.

Nelya Rassokhotskaya, the region's deputy minister of food and agriculture, said that in the Khabarovsk region alone the flooding had caused more than 98 million rubles of damage, and prices on vegetables would likely rise as a result.

The full extent of the damage to the region will not be clear until the water fully subsides, which could take up to a week.

Three Britons, one Swede and a Croat could face the death penalty in Donetsk.
additional punishment

Putin said Russian weapons are valued by military professionals for their "reliability, quality and most importantly — high efficiency."