VRADIYEVKA, Ukraine — It was an ordinary summer evening for 29-year-old Irina Krashkova, a single mother in this quiet farming town. After a day running errands, she went dancing with her girlfriends at the local bar.

As she walked home, she said, two policemen pulled up beside her. One was 1st Lieutenant Evhen Dryzhak — a feared man about town, described by locals as a heavy drinker who beat and insulted townsfolk and forced them to pay his bar bills.

What happened next shattered Krashkova's peaceful life, filled with days breeding ducks and playing checkers with her 12-year-old son Dmitry. The cops, Krashkova said, forced her into the car and drove her to the woods. There, with the help of a friend, they allegedly beat her so badly they fractured her skull. The officers then took turns raping her, Krashkova said.

The case brought attention to Ukrainians' growing outrage over the perceived impunity of officials and their powerful friends — from lawmakers to businessmen to small-town cops. Reports of police abuse ranging from horrific violence to quiet bribery have risen sharply since the 2010 election of President Viktor Yanukovich. The opposition accuses him of moving Ukraine down an authoritarian path and trampling democratic institutions and the rule of law. 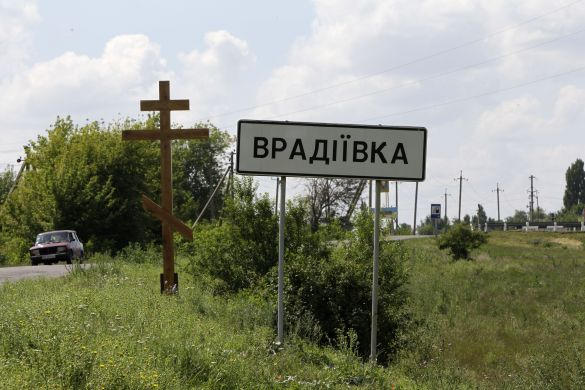 A sign reading Vradiyevka on the side of a road leading to the small town.

Even after Krashkova fingered Dryzhak as the leader of the attack, the burly officer continued to walk the streets of Vradiyevka for a week — showing up at work and buying raspberries at the local market. He even interviewed witnesses in the case. The horror of the crime combined with years of enduring abuse from Dryzhak and his fellow officers to send a current of rage through the town. Hundreds of residents stormed the police station in protest.

It was only then that Dryzhak was arrested. His alleged accomplices, police Lieutenant Dmitry Polishchuk and their friend, were detained soon after the attack. All three say they are innocent and refuse to testify.

Krashkova's case bore shocking resemblance to one in Mykolaiv, the capital of the region that includes Vradiyevka. Last year, a young woman was raped and set on fire and died after two weeks in the hospital. Three suspects were detained, but one with powerful regional connections and his friend were quickly released. They were jailed again only after protests erupted across the country. One suspect has been sentenced to life in prison, while two others received terms of 14-15 years.

Krashkova's case, too, has become a national cause. Hundreds of activists rallied Thursday against police abuse and impunity in central Kiev and erected tents to maintain a round-the-clock protest. Some came on foot from Vradiyevka, a town some 330 kilometers south of the capital. But the protest was forcefully dispersed overnight by riot police and the tents were torn down. Several activists were detained.

Ukrainians say they are tired of seeing the powers-that-be, their kin and their cronies avoid punishment for crimes big and small — from bribe-taking to ignoring traffic rules to committing rapes and murders. People complain that they are defenseless against the giant corrupt government machine, in which law enforcers and officials close ranks and cover up each other's crimes.

From her hospital bed, Krashkova recently described the horror of the attack.

"They strangled me, they beat me and called me all kinds of names," Krashkova said in a weak voice in a video interview with local media. Her face was swollen and bruised and her head was wrapped in a white bandage. "Dryzhak raped me and asked Polishchuk, 'Do you want to?' He said 'yes' and raped me."

After the attack, the alleged rapists drove away but soon returned — apparently to finish her off. They could not find her in the dark. After they left, Krashkova started walking — taking a few steps, passing out, coming to, taking a few more steps. Eventually she reached a village and stumbled into a flour mill. 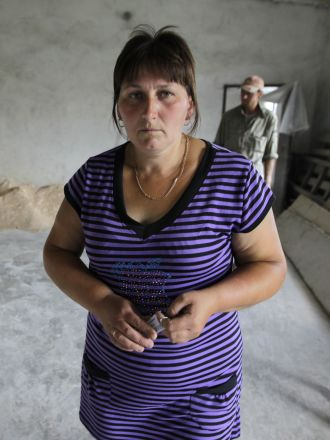 Svitlana Chubko recounting how she found the 29-year-old rape victim.

Manager Svitlana Chubko found Krashkova naked, covered in blood, hiding her private parts with a bunch of leaves, and clutching a pair of sandals.

While Polishchuk and the friend who drove the car sat in jail, Dryzhak remained free — claiming he had been on duty at the police station that evening.

A week later, enraged residents stormed the police station, believing he was hiding inside. They threw rocks, smashed the windows with bats and hurled firebombs.

Serhiy Maksimenko, a local opposition activist, is convinced the case would have been hushed up had it not been for the protest. That's because Polishchuk is the nephew of a senior regional prosecutor and Dryzhak is closely connected to the top regional police official.

"I am 100 percent sure that had the people not risen up, this Dryzhak guy would have come out clean — he would be investigating this very case," Maksimenko said. "They would have scared her into keeping her mouth shut."

Prosecutors investigating the police response said the deputy police chief tried to protect Dryzhak. They say he beat one of the two alleged accomplices to force him not to testify against Dryzhak, and that several policemen falsely testified that he was with them at the station all night. The police chief was fired, his deputy arrested and the policemen who gave false testimony are under investigation.

Some two weeks after the attack on Krashkova, business was running as usual at the Vradiyevka police station; the broken windows and doors had been replaced. Policemen showed no sign of remorse. One officer lamented that Vradiyevka was dragged through the mud on national television. Another mocked a journalist for traveling from Kiev, saying: "Why, has something happened?"

Valery Koba, the acting police chief, sought to strike an apologetic tone, saying that what happened was "simply unacceptable," but denied it was characteristic of police impunity. 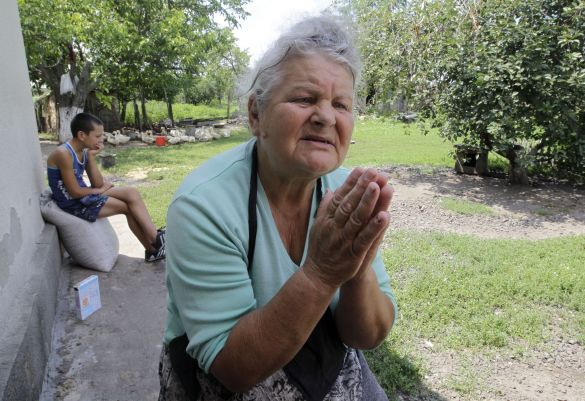 Maria Krashkova, mother of the rape victim, speaking to reporters July 10 while her grandson sits behind her.

If Dryzhak and Polishchuk are found guilty, Koba said, it would be "an exception rather than the rule, if you look at the police as a whole."

Human rights groups have a different view. An April report by Amnesty International said police abuse is rampant in Ukraine, while the authorities refuse to investigate and fight it. And a study by the global corruption watchdog Transparency International released last week said nearly half of Ukrainians believe that corruption has increased significantly over the past few years.

"The reaction of Vradiyevka residents clearly demonstrates to what extent people don't trust the current system of investigating and punishing crimes committed by government officials," Amnesty said earlier this month.

Emboldened by media attention and a pledge by top government officials to bring order, Vradiyevka's townsfolk have filed a raft of complaints against police abuse over the years. One man went on national television and accused police of torture to draw out a false confession. Another man said on the same TV show that police raped his wife, driving her insane. Authorities have not responded publicly to the televised complaints.

Lyudmyla Montian, 40, who worked with Krashkova at the grocery store, said residents feared Vradiyevka would sink back into lawlessness once the Kiev investigators left town. In the case of Oksana Makar, the dead rape victim from Mykolaiv, a senior police officer who was fired for allowing the release of the two suspects has been reinstated by the Interior Ministry.

"Everybody wants things to change," Montian said. "But will they change? People are not sure."

Krashkova's mother wept as she expressed her fear that the rapists would evade justice.

"How can the holy earth carry such beasts?" Maria Krashkova said. "Did I give birth to four children so that somebody could torture them?"