“I do intend to ask for political asylum in Russia. I believe that the legal means to stay in Russia safely, to attempt to move to Latin America, is to request asylum in the Russian Federation. I can only at this time formally accept asylum in Russia because of the limitations on my ability to travel,” Snowden told his handpicked audience.

The meeting took place in an unidentified room of Sheremetyevo Airport's transit zone, where Snowden has been apparently stuck for three weeks after the United States revoked his passport. Snowden's guests were followed by dozens of frenzied journalists as they made their way to a special door meant for staff only. The drama reached its peak when the overcrowding on the escalator made it malfunction and journalists had to rush up the frozen stairs.

Snowden's plea for Russian protection marks his second attempt to obtain legal status in Russia.  On July 2, he withdrew a request after President Vladimir Putin said he could only stay in Russia if he stopped inflicting damage against “our American partners.”

This time, Snowden reasoned that his request was not at odds with Putin's condition, as he was not actually inflicting damage against the U.S.

“He called on the organizations present to intervene in support of his asylum claim. He also said that he did not find Putin's remark problematic because, as he says, he did not do any harm to the United States and he did not plan to do any,” Tanya Lokshina, senior researcher at Moscow's Human Rights Watch office, said after the meeting, noting that Snowden “looked like a schoolboy.”

Snowden also asked for assistance in convincing international organizations to petition the U.S. and European Union to allow him to travel, since such organizations require applicants to come to them, and he is stuck in the airport, Lokshina said.

The Russian government is clearly watching the situation closely, as representatives of Russia's secret services were evidently present at the meeting, said Sergei Nikitin, head of Moscow's office of Amnesty International. 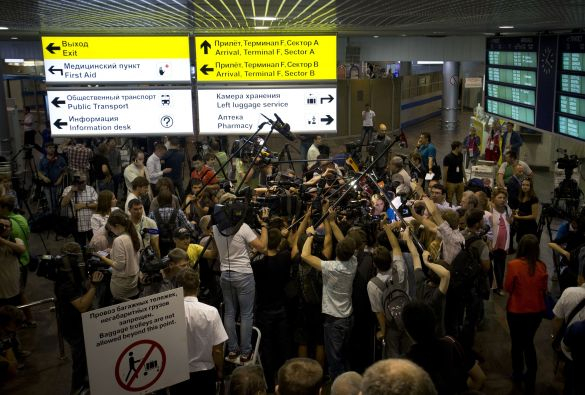 “If you see men in suits with military bearing and a heavy look on their faces, then who do you think these people are, school teachers?” he said.

Nikitin also said that whoever was taking care of Snowden seemed to be doing it quite well, as Snowden himself clearly stated that the conditions he enjoyed in Moscow were good. At the same time, according to Nikitin, Snowden said he had not yet been able to improve his Russian despite listening to hundreds of airport announcements each day.

The head of Russia's Federal Migration Service, Konstantin Romodanovsky, told Interfax on Saturday that the agency had not yet received Snowden's asylum application. Foreign Minister Sergei Lavrov said at a meeting of the Shanghai Cooperation Organization's foreign ministers in Kyrgyzstan on the same day that the government was not in contact with Snowden.

Putin discussed the Snowden situation with U.S. President Barack Obama over the phone Friday, though no details of that conversation have been made public.

All participants of the meeting, including both pro-Kremlin State Duma Deputy Vyacheslav Nikonov and human rights organizations — the offices of which have been raided by government authorities in recent months — agreed that Snowden had a strong case to seek asylum in Russia.

The asylum request leaves Russia with fewer options to remain neutral in the matter. The Kremlin has publicly indicated a desire to be rid of Snowden, whose presence in Russia has hurt already strained U.S.-Russia ties, but signals Friday pointed to a possible change in attitude.

State Duma speaker and strong Putin ally Sergei Naryshkin told Rossia 24 television that he thought Russia should grant Snowden asylum, assuming he fulfilled the condition set by Putin. And lawyer Anatoly Kucherena, a member of the Public Chamber who has represented outspokenly pro-Putin film director Nikita Mikhalkov and United Russia lawmaker Iosif Kobzon, said he had agreed with Snowden to help him in preparing his asylum request, according to Interfax. The application process would take between two and three weeks, he said.

Obama's spokesman, Jay Carney, said Friday that “providing a propaganda platform for Mr. Snowden runs counter to the Russian government's previous declarations of Russia's neutrality and [claims] that they have no control over his presence in the airport.”

It was unclear from Snowden's statements regarding his attitude toward the U.S. whether he intended to stop leaking secret U.S. documents, for which the United States wants to charge him with espionage, or whether he believes that he is actually helping the U.S. by leaking the information.

“Russia did the right thing in not giving up Snowden. There are things more important than a momentary gain. Pragmatism in foreign policy is not the same as cynicism,” Pushkov wrote.