The St. Petersburg International Economic Forum bills itself as the must-attend event of the year for any Western investor interested in Russia. But that hasn't prevented the occasional goof-up that has left government officials red-faced or defending themselves.

As the forum opens this week, we take a look back at eight scandals that have pockmarked its 17-year history. 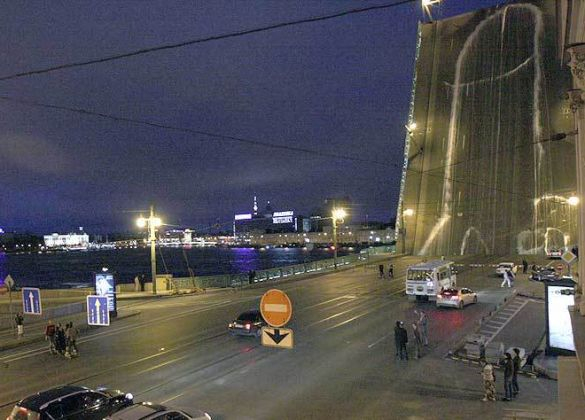 1. Pulling Out the Big Gun

On the eve of the forum in 2010, a group of opposition-minded artists called Voina, or War, painted a giant penis on a drawbridge facing the Federal Security Service building in St. Petersburg.

The artists studied traffic patterns on the Liteiny Bridge and practiced drawing the penis in a parking lot for two weeks in advance because they had only 30 seconds to finish the painting before the bridge was raised.

The preparation work paid off. A light-colored penis measuring 65 meters long and 27 meters across rose into the dark sky when the artists completed "Giant Galactic Space Penis" on the night of June 14-15.

"We have painted a giant phallus to show what the FSB and Interior Ministry are doing in terms of security for the forum," Voina said at first in a statement.

Later the group said the drawing also was a protest against the FSB's unchecked powers.

No matter the purpose, the protest brought swift punishment from the authorities. Voina member Leonid Nikolayev was arrested and convicted of disorderly conduct, which carried a fine of about $30.

But he more than made back the money several months later when he and fellow artist, Oleg Vorotnikov, were handed 400,000 rubles and a state award for the penis painting, which is also known by the title "Penis in FSB Captivity."

The painting took the prestigious Innovation award in the main category, visual art, in a contest established by the Culture Ministry but overseen by an independent jury.

Voina faded from the public spotlight in 2011 — the same year that two members of its Moscow branch, Nadezhda Tolokonnikova and Yekaterina Samutsevich, teamed up to help form the female punk group Pussy Riot. 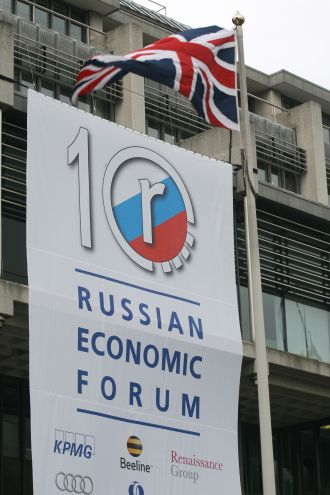 A banner welcoming investors to the 10th Russian Economic Forum in London. (Vedomosti)

While the first St. Petersburg forum was held in 1997, it took a scandal for the gathering to don its present mantle as Russia's premier economic event.

For years, the must-attend annual event was the privately organized Russian Economic Forum in London, where Western investors got a chance to rub shoulders with Russian government officials and Russian business leaders.

Few investors paid attention to the St. Petersburg event, which was initially known as the Nevsky Summit and focused on politics rather than making business contacts. Indeed, the first St. Petersburg forum in 1997 studied the problems of integration after the Soviet collapse and concluded with Russia agreeing to loan $100 million to Belarus.

Hell broke lose in 2007 when all Russian government officials and a number of high-ranking business leaders pulled out of the London forum at the last minute. It was the first time ever that no government officials had shown up, and people familiar with the Kremlin's thinking told The Moscow Times at the time that the presidential chief of staff's office had asked officials and business leaders to skip it in favor of the St. Petersburg forum.

The Kremlin denied that it was behind the no-shows, and then-Economic Development Minister German Gref insisted that there was no competition between the two gatherings. "St. Petersburg is the main venue for us, and it is gaining popularity," he said.

But the cancellations sounded the death knell for the London event. They also marked the relaunch of the St. Petersburg forum, with President Vladimir Putin and then-First Deputy Prime Ministers Sergei Ivanov and Dmitry Medvedev topping the bill of speakers that year. 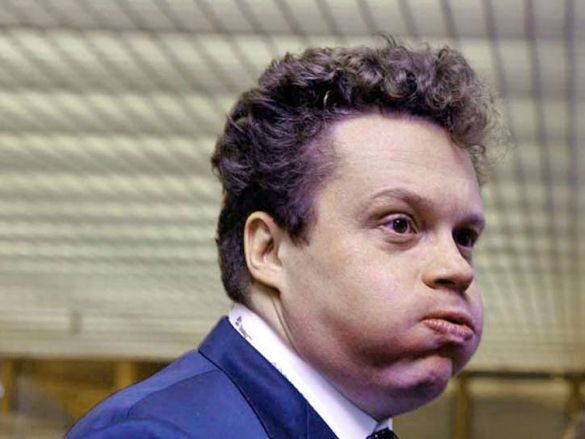 Hotel rooms are a precious commodity during the forum, and property mogul Sergei Polonsky raised a stink over what he called price-gouging in 2009.

Polonsky, who at 35 at the time was Russia's youngest billionaire and worth an estimated $4.35 billion, bitterly unfurled a 3-square-meter poster of his hotel bill during a session at the forum .

Interestingly, a fellow participant, Yevgeny Chichvarkin, then the owner of the Yevroset mobile phone chain, helped Polonsky hold up the hotel bill at the session.

But don't expect to see Polonsky or Chichvarkin at this year's forum.

Chichvarkin is living in self-imposed exile in Britain after losing control of his company amid a criminal investigation that he called politically motived.

Polonsky's whereabouts are unknown. He was arrested in Cambodia on New Year's Eve 2012 after allegedly assaulting local sailors, and he spent months in a Cambodian jail before being released on condition that he not leave the country.

Just days ago, Russian investigators charged Polonsky in absentia on suspicion of embezzling 5.7 billion rubles ($180 million) from stakeholders of a Moscow construction project. His lawyers say he denies wrongdoing. 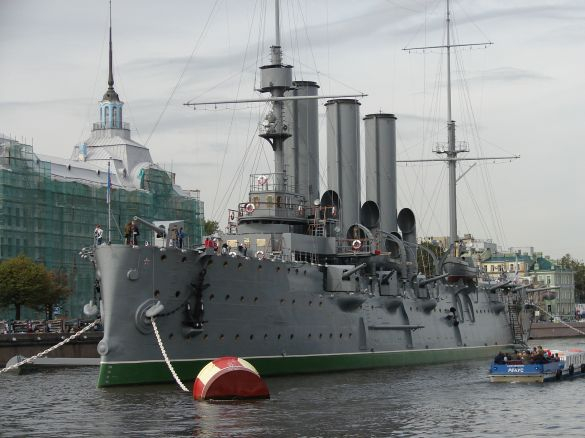 The Aurora went from assisting the 1917 Revolution to hosting a billionaire's party in 2009. (Wikicommons)

4. Partying on the Neva

Billionaire Mikhail Prokhorov incited the wrath of State Duma deputies when he threw a forum-themed party on a legendary naval cruiser that played a symbolic role in the Bolshevik coup of 1917.

Prominent business leaders and government officials were wined and dined on the cruiser Aurora on the Neva River during the 2009 forum. The event, organized by the magazine Russky Pioneer, owned by Prokhorov, touched off a scandal among Duma deputies, who accused Prokhorov of tarnishing the symbolic ship.

The Aurora, built during the reign of Russia's last tsar, Nicholas II, had become a symbol of the Bolshevik Revolution after it issued a blank shot signaling the start of the storming of the Winter Palace in St. Petersburg, the seat of the provisional government, in October 1917.

Incidentally, the Neva has been a prime spot for forum shindigs. In 2008, billionaire Roman Abramovich moored his sparkling 115-meter yacht Pelorus on the Neva at the exact point where the cruiser Aurora had signaled the start of Lenin's Revolution. 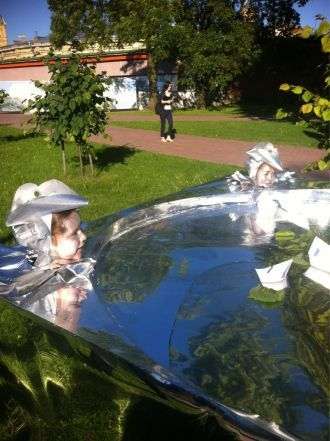 Girls blowing into the sails of ships at the St. Petersburg governor's reception in 2012. (Nikita Belykh / Twitter)

5. Girls Made to Pose as Statues

Participants were stunned at last year's forum when four young girls were made to pose as live statues at a reception organized by the governor of St. Petersburg at the city's historic Peter and Paul Fortress.

The girls, ages 9 to 10, wore silver paint and were dressed as wind goddesses blowing air into the sails of ships floating across a silver "lake" at the event.

Kirov Governor Nikita Belykh published a photo of the girls on Twitter, writing, "In St. Petersburg, this is how they torture children. … Where is @Rfdeti?" referring to the Twitter account of Russia's children's rights ombudsman, Pavel Astakhov.

Katya Solntseva of ABBYY software said she pulled the girls out after seeing them.

"The whole horror is not visible in the picture. The sun shone directly into the eyes of one girl. I think she stood so for at least an hour. I hope very much that her eyes were not injured. Especially shocking is that passersby were outraged, but took pictures and moved on. … Frankly, I really hope the organizers are punished," she said.

The St. Petersburg governor's office denied any responsibility for the treatment of the children, saying the event was organized by a third party that had won a tender process for the event.

"The city only gave the financing. The responsibility lies with the victor in the tender," a city spokesman said. 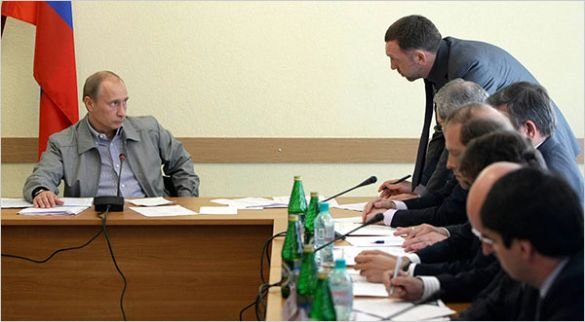 Speculation swirled ahead of the 2009 forum, the first in the presidency of Dmitry Medvedev, over whether he would give the main speech or whether the honors would be left to Putin, whose portfolio as prime minister included the economy.

Putin finally sought to squash the talk by making it clear that he would not attend the forum.

But he stole the spotlight anyway.

Just as the forum opened, Putin was forced to fly to the Leningrad region town of Pikalyovo, only 245 kilometers southeast of the forum, to prevent a possible uprising among factory workers angry over wage arrears.

In the space of a day, Putin berated factory owners, including billionaire Oleg Deripaska, onsite for allowing a business conflict to leave thousands there with unpaid wages. As United Russia lawmakers back in Moscow introduced a bill to nationalize the town's three plants, Putin threw a pen at Deripaska and ordered him to sign a supply contract and repay wage arrears by the end of the day.

The workers were mollified, and Putin managed to keep labor unrest in check amid an economic recession that had started the previous autumn.

But Putin's actions also overshadowed Medvedev's presence at the forum — and sent a clear signal to investors about who was really in charge. 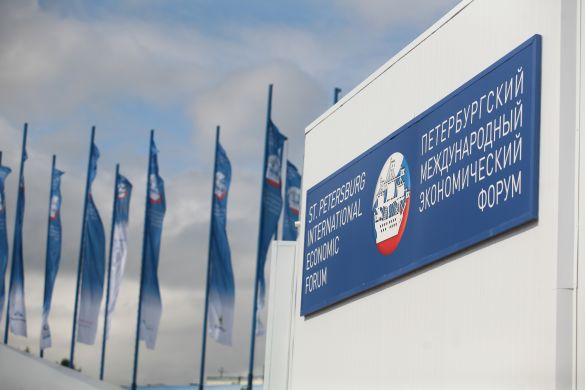 Forum organizers sharply increased entrance fees in May, just a month before the 2013 forum. (Vedomosti)

Just a month before this week's forum, organizers jacked up the price for participation by more than 65 percent.

Dmitry Mikhailov, a deputy head of the St. Petersburg International Economic Forum, explained that organizers were trying to encourage participants to send smaller delegations due to high demand and a lack of space at the Lenexpo complex, where the forum is held annually. 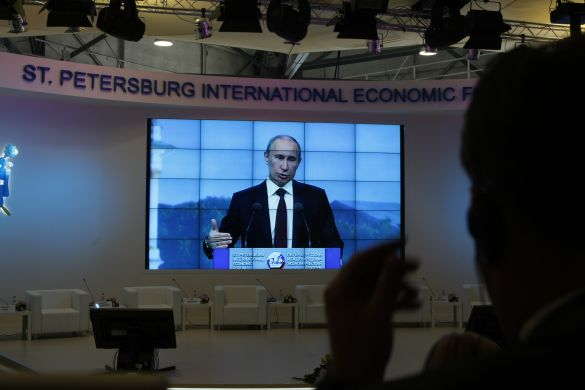 Top business leaders go to the forum to gain access to President Vladimir Putin. But in 2012 they were forced to wait for him. Twice.

Putin kept a hall packed with thousands of investors waiting for 40 minutes for his plenary speech. During the wait, a European CEO angrily complained to a Moscow Times journalist that the Kremlin showed little respect toward investors. He and a top European politician had been made to wait five hours to enter the forum after a security glitch rejected their entry badges. "This would never happen at Davos," he said, referring to the World Economic Forum. "If the Kremlin wants to attract foreign investors, it must be better organized and respect their time."

The complaints continued when Putin arrived three hours late for a separate private meeting with foreign CEOs, who were forced to wait in a narrow hallway.

"People are feeling insulted," said one oil company boss, according to The Wall Street Journal.

"The combined per-hour salary of all the CEOs here would match the budget of the forum for years," another was quoted as saying.

No word yet on whether Putin will try to be more punctual this year.