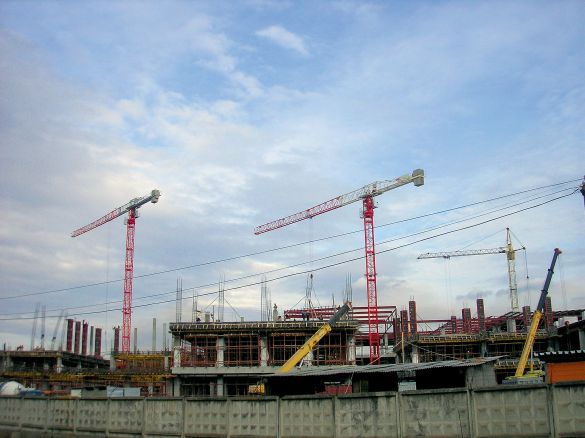 Developers like Red Square mix entertainment and retail for growing middle class that is ready to spend money.

Forget the twin capitals. The regional market for entertainment and shopping centers is booming.

Office completions in both Moscow and St. Petersburg slumped to their lowest level in 2012 for seven years. In the retail capital of Moscow, the gain in new retail floor space was the smallest for nine years: just 165,000 square meters, 16 percent below 2011.

Traditional shopping centers are still the  most profitable format of retail pro- perty so these will be developed in the first place.

As many as 47 new shopping centers opened, while four others expanded added floors pace through the opening of new development phases.

The fastest growth was seen in cities with populations below 500,000, with a jump of 245 percent in new retail space. Another 56 retail centers were opened in 33 cities, according to the latest Research and Forecast Snapshot from Colliers International. The past year has seen a burst of activity in Russia's regions, particularly in the industrial and retail sector.

"Currently the most attractive cities for developers are located in oil-oriented regions, such as Tyumen, Surgut and others. Also developers are looking for opportunities in resort areas. Sochi is the most interesting place because of the Olympic Games which are scheduled for 2014."

As Real Estate Quarterly reported in its third quarter of 2012 edition, developers are constructing warehouse space key southern hubs like Rostov-on-Don and Krasnodar but further development depends on the arrival of big retailers who typically account for 60 percent of total demand for warehouse space. So the launch of major retail developments in the regions is likely to have a multiplier effect upon the entire construction and development sector.

Consumer in the driver

Cushman & Wakefield Research in Moscow estimated in its end-2012 report, Retail Space Across Russia, that if retail turnover continues to grow at 5 percent annually, Russia may become the largest consumer market in Europe as soon as the end of this year. At the same time, the average supply of retail space per 1000 inhabitants in Russia totals 95 square meters, compared to a European average of 247 square meters. That average hides a great deal of variation.

The headline numbers belie the dynamics of the market. Russia has a total gross leasable area (GLA) of 15.4 million square meters of quality retail stock (Cushman & Wakefield, October 2012) with 3.9 million of that in Moscow and 2.4 million square meters in St. Petersburg. Cities with a population of around 1 million have seen a retail boom in the past two years that has left cities like Krasnodar with oversupply, at 762 square meters of retail stock per 1000 inhabitants, three times the European average, according to the same Cushman & Wakefield report.

That has turned the focus to smaller cities, those with populations of around half a million: Tula, in the southwest of Russia; Irkutsk in Siberia; and in the east of Russia Kemerovo northeast of Novosibirsk, Russia's third most populous city; Khabarovsk and Vladivostok.

Sergey Yasin,
Red Square's Director in Armavir
What makes Armavir more attractive than other cities of a similar size in Krasnodar Region?

Sergey Yasin: Despite the fact that Armavir is the fourth-largest city in the Krasnodar region, at the moment it effectively lacks quality retail. Given the growth of incomes and demand for quality services, the people of Armavir will not be able to satisfy their needs.

Since the beginning of the crisis developers have switched their focus from large cities to cities of less than a million people. What drove this?

Sergey Yasin: Most big companies, before the crisis and after, had been and still are focused primarily on the cities with a million or more citizens. RAMO-M Holding chose its strategy of regional development back in 2003. This is the reason why the very first project of the holding, the mega-center Red Square, was realized in Krasnodar, a city with less than a million inhabitants. The expectations of the holding were met and the same strategy was followed from then on.
Talking about the shift of focus from large cities to ones with less a million people, the reason is increased competition among the shopping centers and consequent difficulties in their further development.

What is conceptually different about the entertainment component? How will it differ from other big retail centers?

Sergey Yasin: The main aim is to develop a shopping culture in the cities where Red Square is represented. In the past most of the inhabitants of such cities had to go to other cities in order to shop for what they needed or in order to have a good time.
With the appearance of the Red Square center this won't be necessary. In many cities we were the first and are still the only player offering complexes comparable to European levels, which meet the standards of comfortable shopping: a nice atmosphere in the shopping center, convenience, a big variety of goods and services available and the uplifting aura of a holiday. The mega-center Red Square in Armavir, just like the other centers of the chain, will be happy to offer locals and visitors to the city events free of charge: weekly entertainment programs, children's shows, fashion catwalks, pop concerts, lotteries and other festive events. The constant atmosphere of comfort and festival is a specialty of each shopping and entertainment center in the Red Square chain.

"Traditional shopping centers are still the most profitable format of retail property so they will be developed in the first place. Retail parks are usually developed in cities with a high competition of shopping centers on plots that have less attractive locations," said Nikolay Kazanskiy of Colliers.

The developers of Red Square say the middle class in the regions is ready to spend money and companies are ready to respond to that. This means that the regional retail market is ready to absorb large shopping and entertainment centers developed by the big chains.

Red Square's Director in Armavir, Sergey Yasin: "Based on our own research as well as an assessment of this region's development perspectives, we made a list of cities of the Krasnodar region in which RAMO-M would like to develop its business: Krasnodar, Novorossiysk, Anapa, Tuapse. Sochi is not on this list due to the special entrance factors namely the high price of land. Tuapse despite a comparatively small population is a big industrial center connecting with other cities. Anapa is a resort city. Big numbers of sanatoriums, rest houses and resorts are open all year round while small and large hotels attract millions of tourists from all across Russia every year.

"Armavir is one of the most important administrative and cultural centers of the Krasnodar region and the only big city in its eastern part. Armavir and its suburbs (about 10 square kilometers) include many settlements. The inhabitants of this area make regular use of the shopping and entertainment offered by Armavir, because other centers of such activity (Stavropol, Krasnodar, Rostov-on-Don) are situated quite far away."

St. Petersburg-based company Единые решения, whose name translates as United Solutions is another company planning to build small shopping centers of 5,000 to 12,000 square meters. It is targeting towns in Moscow Oblast with populations in the range of 100,000 to 500,000 people.

The trend towards increased construction in smaller regional cities is partly a sign that getting planning permission has become tougher in Moscow, while authorities in the regions, where there are fewer players, are becoming more amenable. Entering regional cities and small towns at sub-regional level, can present unfamiliar obstacles for companies opening shopping and entertainment centers.

Viktoria Shakhshaeva, lawyer for the shopping and entertainment center Red Square in Armavir, said renting land for the development was the first complication: "There were difficulties, for example, when consolidating the plot for subsequent transfer of rights and obligations under the lease contract from the previous lessee. However, all legal difficulties are easy to resolve if the company has a wide partnership network, knows the legal base of this sector deeply and acts in a timely manner."

"The administrative barriers were minimal and the City Administration co-operated eagerly. Of course we would not have seen such a positive attitude if the shopping and entertainment center did not solve so many problems for the City."