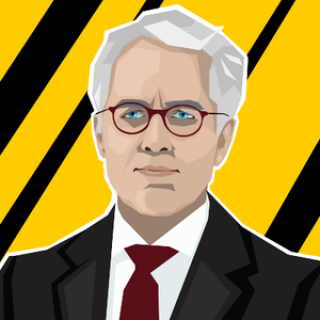 My wife and I discovered the first monument during a Sunday stroll around our residence in the Arbat district. It was a monument to Marina Tsvetaeva on Borisoglebsky Pereulok. The great poet, one of the many victims of Stalinist repression, had lived across the street. We soon found out how many more poets and writers had lived in our neighborhood, many of whom are now commemorated by monuments or plaques — and how many of them were so closely linked with Germany. Tsvetaeva’s German is said to have been impeccable (she lived in Freiburg for several years) and her — tragic — love of our country found expression in her poetry. She maintained an inspiring correspondence with Rainer Maria Rilke, and when he died she wrote a beautiful poem about him. Some say it is one of the greatest poems in Russian literature.

Derk Sauer on Journalism, Russia and Being a Black Sheep

Rilke, in turn, visited Russia twice on extensive journeys and fell in love with the beauty of the country, the wealth of its culture and the great people he met. Among them was one of Russia’s greatest portraitists of the time: Leonid Pasternak, who gave the world a wonderful painting, “Rilke in Moscow,” which will be displayed here in Moscow at an exhibition called “Rilke and Russia” in early 2018. It was there, at his father’s house, that the young Boris Pasternak met Rilke, about whom he later wrote in an essay. Boris certainly could have done so in German, as he had studied in Marburg. Another great Russian Rilke met was Leo Tolstoy, whose statue stands right next to our house in front of a palace he chose as the home of the Rostov family in “War and Peace.” Tolstoy’s work and thinking had a significant impact not only on Rilke, but also on other well-known German authors such as Thomas Mann and Bertolt Brecht. And, yes, Anton Chekhov — who spent the last part of his life in Germany and to this day remains the second most successful foreign author on German stages after William Shakespeare — lived just around the corner.

On the Day of My Departure (Op-ed)

And then one day, we discovered the expressive installation honoring the great poet and singer Bulat Okudzhava. It was his beautiful songs and delightful, ironical novels ridiculing the KGB by pretending to depict the Okhrana of tsarist Russia that had lured me into my first attempts to learn the wonderful language spoken by Okudzhava (and Chekhov and Pasternak and ...) in the early 1970s.

Why does a diplomat reflect upon all this? Germany and Russia’s ties are so deep, so rich, so substantial — be it in literature, trade or science, be it in the exchanges between civil society or in the fine arts. I am highly confident that the solid foundations of our relations, which were built over the course of centuries, cannot be destroyed by current controversies and differences of opinion. Wherever we see such things, we must address them. Wherever we feel that commitments, agreements or the law have been violated, we need to speak out and seek to redress them in accordance with the principles and rules we have all agreed on. The lessons of history and the correctness of these principles teach us never to say: “Oh, let’s just forget about it!” However, we will always engage with the clear ambition in mind that we want to build good relations with Russia — and that we have both a great heritage and a great present that will help us to do so. Throughout the time I have spent in Moscow — not always easy — my feeling has been very clear: My fundamental affection for Russia will not be shaken.

Rüdiger von Fritsch is the German Ambassador to Russia.

*This article is part of The Moscow Times' 25th anniversary special print edition. To view the entire issue click here.

When Navalny was jailed one year ago, we didn’t immediately understand that in fact, it was all of Russia that wound up behind bars.
opinion Neil Hauer

The U.S. and Europe need to maintain the agreed negotiating format while planning for the worst case to show Russia it will face a severe response to aggression...