“Space: The Birth of a New Era,” VDNKh’s most hyped exhibition of the year, is certainly setting its sights intergalactically high. Fortunately, visitors won't be disappointed.

This celebration of cosmonaut culture gathers together over 100 pieces of equipment, posters, spacesuits and interplanetary landers — many of which have never before left the walls of ultra-secretive organizations and private collections. That they are now exhibited together at VDNKh’s 100-meter-high classical empire-style Pavilion No.1 is nothing short of extraordinary.

The items on display are testament to these achievements. The Vostok 6 spacecraft — which carried the first woman into space — has to be one of the major draws. Spherical in structure and still bearing the scorch marks from its re-entry into the earth's atmosphere, it gives you some insight into the cramped conditions 26-year-old Valentina Tereshkova must have experienced during three days of hurtling around the earth’s orbit in 1963. Tereshkova’s mission was so secretive that she couldn’t even reveal the truth to her mother, who heard about her daughter’s exploits from a neighbor.

Meanwhile, in the grand, domed hall, visitors can gawk at the distinctly other worldly engineering model of the Lunokhod 3. The structure, which towers over guests, was the first spacecraft in the world designed to move on the surface of another planet.

The exhibition comes as VDNKh looks to expand its portfolio of museums. “Our exhibition marks the first step in creating a new attraction in Moscow, a dedicated space,” said Ekaterina Pronicheva, general director of VDNKh, in an interview with The Moscow Times. “In the next few years VDNKh will open its Space and Aviation Center, and we hope that the high quality that you can see in this exhibition will also characterize the museum. We want it to be the most modern and most interesting place to tell the world about the Russian dream of space exploration.” 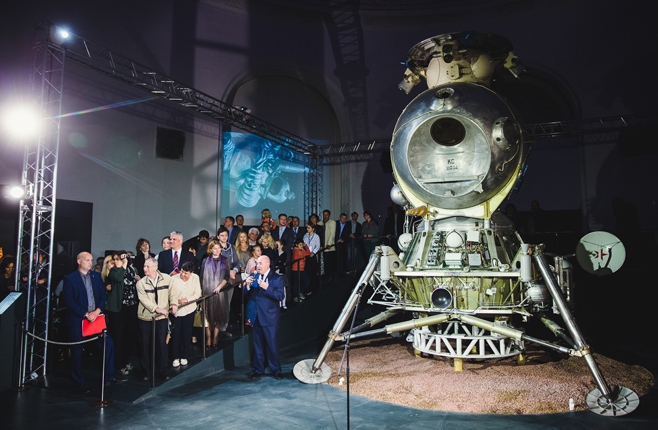 From London to Moscow

The journey to the current exhibition started over five years ago at the UK’s Science Museum. An unprecedented collaboration between ROSCOSMOS, ROSIZO and the United Rocket and Space Corporation allowed the original landers of the Vostok 6 and Voskhod 1 as well as the personal belongings of Yury Gagarin and Sergei Korolyov to travel to London where “Cosmonauts: The Birth of the Space Age” opened in 2015.

It was nothing short of a sensation. The tickets sold out several months before the exhibition even opened to the general public, and “Cosmonauts” was declared the most successful Science Museum Exhibition of all time when it closed earlier this year. While the current exhibition at VDNKh is based largely on the British concept — it worked with the Science Museum to bring “Space” to Moscow — it features even more exhibits and a bold, artistic layout. 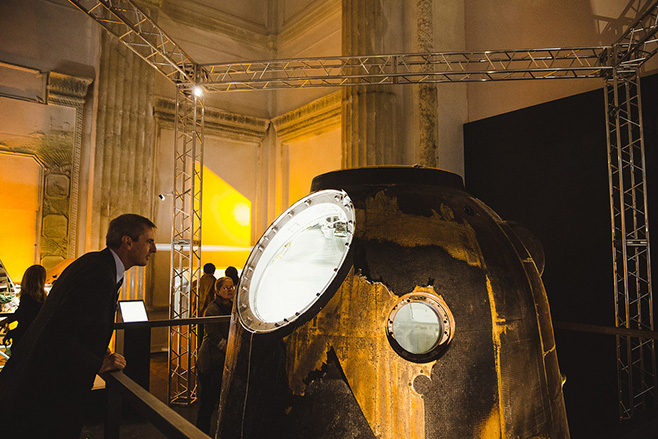 The exhibition documents humankind’s constant desire to push the boundaries of knowledge, from Konstantin Tsiolkovsky’s development of the mathematics of rocketry, to engineers establishing how to defy gravity and later, sending people into orbit. And it also documents the irrepressible human spirit: during this period in Russia's history, when so much was sanctioned and censored, dreams of cosmic grandeur flourished.

But the show is not all equipment: bold Soviet-era posters celebrate the achievements of Russia's cosmonaut heroes in striking graphic style, while drawings by Galina Balashova show her designs for the Soviet Union's rockets, orbital laboratories and shuttles. Her drawings, which brought architecture and a modicum of comfort to cosmic heights, are both fascinating from an artistic point of view and incredible historical documents.

“Our forefathers gazed at the stars, dreamed of bigger things and achieved even greater things. If we take one example from exhibitions like these, it’s that they teach us how we need to study, work and live, so that we can go even further,” said Vladimir Medinsky, the Russian Minister of Culture, at the opening of the exhibition.

Testing our limits would seem to be a human preoccupation. When you enter the final section of the exhibition you’re left with one question: Considering how far we've come, where will we go next?

Tomorrow is opening night of the Moscow Jewish Film Festival, a cultural event offering Muscovites the chance to become acquainted with the world of Jewish...
news

The weather is back to being almost summerlike — which is good news because this will be another weekend of summer festivals. There's Ahmad Tea Music...
news

Moscow's White Rabbit restaurant has been ranked 18th in an annual list of the world's top eateries by the World's Best Restaurants publication.
last call