Bold and experimental, the designs currently on show at the Central Manege Exhibition Hall have none of the romanticism of the Hollywood silver screen. Celebrating the cultural heritage of Soviet cinema through the revolutionary new art form it precipitated — the film poster — "The History of Soviet Cinema in Film Posters 1919-1991" brings together some of the most innovative film artwork of the past century. The exhibition explores the symbiotic relationship between cinema and the graphic arts, demonstrating how a mass-produced publicity tool became its own artistic genre.

A joint venture from the State Museum and Exhibition Center ROSIZO and the Moscow Museum of Design, the exhibition gathers together more than 300 iconic posters from the past century. The collection chronologically spans the history of Soviet film — from early silent film to the cinema of the Stalinist era, the Khrushchev Thaw years and beyond. The exhibition allows visitors to track artistic developments through the 20th century as cinema became the most popular art form. From the advent of constructivism to the arrival of socialist realism and later sophisticated photo-montage techniques, film posters were a medium for pushing creative boundaries.

"I had wanted to do an exhibition of film posters for a long time. It is such an interesting and somewhat forgotten form of art. And then the occasion presented itself — 2016 was declared the year of Russian cinema," says Anna Pakhomova, the exhibition curator. The exhibition at the Manege forms part of a wider cultural program this year, which aims to celebrate the legacy of Russian cinema while supporting the current industry. 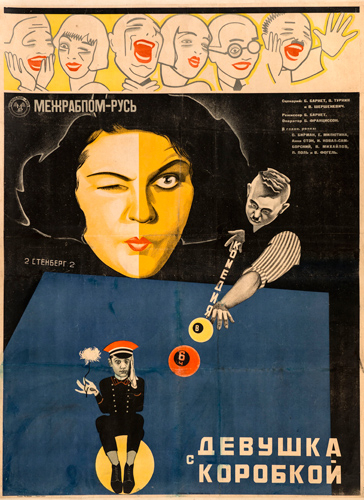 Simultaneously a medium of mass entertainment and a channel for communicating ideology, Soviet cinema flourished in the newly formed U.S.S.R. The 1920s were a time of unprecedented developments in the graphic arts throughout Europe, and Russia was no different. Freed from the confines of realism, artists reassembled images and photographs to create dramatically modern posters that defied the confines of fine art.

A prominent example of this practice is the poster for Boris Barnet's 1927 silent film "Devuska c Korobkoy" (The Girl With a Hatbox), which combines elements of different scales and proportions to create a striking single image. Created by Vladimir and Georgii Stenberg, who famously staged the first constructivist exhibition in 1922, the poster incorporates geometric abstraction with a highly stylized composition.

During the early years of Bolshevik rule, many of the population were illiterate and cinema and its accompanying film posters provided a straightforward method of communicating political messages to the population. The second part of the exhibition, covering the 1930s to the mid-1950s, demonstrates aptly how cinema of this era fell under the auspices of state-sponsored propaganda.

Using the language of socialist realism, film posters had to convey the ideological messages of the ruling party as censorship squeezed the film industry and production and variety rapidly reduced. There was also a focus on patriotic, nationalistic themes. Films produced during the war years, such as "Molodaya Gvardiya" (Young Guard), "Zhdi Menya" (Wait for Me) and "Paren iz Nashego Goroda" (The Boy From Our Town), reflected on the sacrifice and heroism of ordinary Russian citizens.

It was only in the late 1950s and 1960s that there was a return to creative freedom in cinema and art. During the Khrushchev Thaw, artists could once again experiment relatively freely with composition, metaphorical content and symbolism. "Istoriya Asi Klyachinoy, Kotoraya Lyubila, da ne Vyshla Zamuzh" (The Story of Asya Klyachina, Who Loved but did not Marry) is one of these more experimental posters. Directed by acclaimed film producer Andrei Konchalovsky, the film was originally suppressed by Soviet authorities. The poster on display, created by Lyudmila Vasileva-Linetskaya, combines photography and line-drawing to create an abstract composition with jigsaw-like intersecting elements. 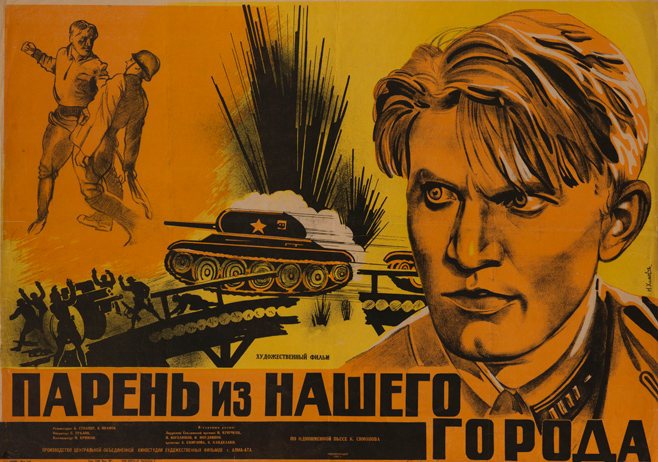 "Paren iz Nashego Goroda" (The Boy From Our Town)

While many of the posters will be recognizable to Russian audiences, alone they still stand as interesting works of art. "Even if the films are unknown, the language of film posters is very meaningful because the artist must give an impression of the whole film 'in one shot' to make the viewer want to go to the cinema," said Pakhomova. "Film posters are, therefore, very interesting to look at — there are many metaphors, imaginative artistic decisions and framing elements. The language of film posters is very graphic, and, at the same time, artistic."

The latter part of the exhibition showcases the cinematography of the 1970s, 1980s and early 1990s. Posters chart the rapid changes afoot in Russian society and the ways in which artists responded to artistic and technological advancements. Films such as "Chuchelo" (The Scarecrow) and "Igla" (The Needle) had posters that played with photography, experimenting with the new possibilities offered by developments in photo montage.

The posters remain fresh and relevant. Bold, colorful designs, distorted geometric forms and eye-catching typography unite to create compelling works of art in their own right.

"For me Soviet cinema offers a history of our country. It is our past, as well as our favorite films" says Pakhomova. While the film posters currently on show at the Manege provide a historical reminder, they remain strikingly timeless.

"The History of Soviet Cinema in Film Posters 1919-1991" is at the Manege Central Exhibition Hall until June 13. 1 Manege Square. Metro Okhotny Ryad. moscowmanege.ru

Muchnik's Picks: Emir Kusturica and More Music in Moscow on the Weekend

Spring's last weekend is upon us and the weather is positively summer-like. At the end of the season there are a few precious gifts for music fans...
news

The Calvert Journal has launched the New East Photo Prize and is now accepting submissions from photographers based in Eastern Europe, the Balkans, Central...
weekend kitchen