Yes, we understand the irony of an article about enjoying spring when it actually snowed last Saturday. But we promise that sunnier spells, blossoms and greener grass are just around the corner. Here's where you can get out and enjoy the fresh air this weekend. 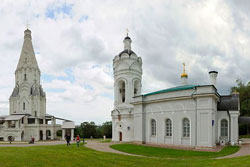 It might still be a little early for Kolomenskoye's famous apple trees to bloom their exquisite white flowers but by mid-May the spot will be an Instagram-lovers' paradise. Trust us. A historic estate located on the southern bank of the Moscow River, Kolomenskoye's most striking landmark is the Ascension Church, which offers a unique example of 16th-century ecclesiastical architecture. Unlike some of Moscow's more central parks, Kolomenskoye is not primped, manicured and paved within an inch of its life. There are hilltop views, interesting architectural landmarks aplenty and a ravine with a beautiful wooden staircase to explore. Nothing says spring like a hot shashlik from one of the park's open-air food stands. 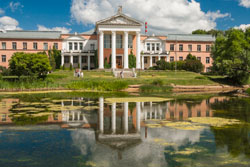 The biggest (and arguably best) botanical garden in Moscow — there are five after all — is located at the Russian Academy of Sciences. The grounds are vast and roaming. In fact the rosarium alone, containing 20,000 rose bushes, and the total site spans over 3.5 square kilometers. The garden itself wasn't intended to be a beauty spot, although it certainly is by any standard. Its main purpose remains to preserve a gene pool of plants for study and to facilitate research into how best to acclimatize plants to a changing environment and manage the world's plant resources. With a Japanese garden, tree nursery and examples of rare Russian plant species, there's no better place to get lost in nature. 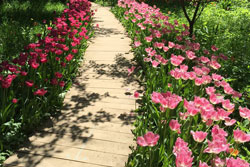 The Aptekarsky Ogorod (The Apothecaries' Garden) is an oasis of calm beyond the Sukharev Tower. Founded in 1706 by busybody Peter the Great, it claims to be the oldest botanical garden in Russia. The garden was initially owned by Moscow's apothecary board and was home to the many species of medicinal plants used for healing purposes. Originally visited by student doctors and medics for educational purposes, these days you're more likely to see groups of schoolchildren playing on the lawns or couples walking hand-in-hand down light-dappled walkways. There are three greenhouses offering specific climate zones and an abundance of rare and beautiful plants to feast your eyes on. 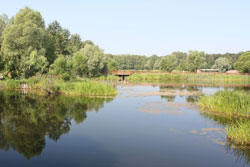 Beauty beyond the center

Although you may not have heard of Serebryany Bor, the nature spot is hugely popular with Russians and its beaches are heaving with bare flesh come summer. Get ahead of the crowds and walk through the tranquil pine forests in April and May when the wild flowers start to bloom. Serebryany Bor occupies a spot between a curve of the Moscow River and a man-made canal that coincidentally created an artificial island and pleasant natural beauty spot. As such, the rich and famous have often used the area as a relaxation spot, and Serebryany Bor boasts many summer houses belonging to politicians, celebrities and businessmen.

And if flowers aren’t for you … 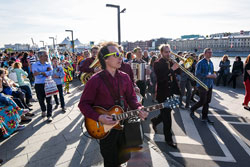 Lovers of the arts rejoice. From May, street performers will be officially allowed to perform in 56 of Moscow’s squares — as long as their activity is not linked to any mass event or demonstration. Musicians, dramatists, jugglers and mimes can now ply their trade to the passing public in locations such as Gorky Park, Muzeon Arts Park and eight of Sokoniki Park’s squares. So get out there and enjoy the music. 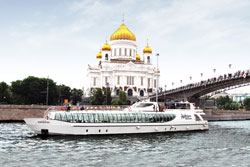 Spring marks the opening of boating season in Moscow as the ice melts and tourists take to the river to gain a different perspective on the city’s best-known landmarks. Spectacular views of Sparrow Hills, the Kremlin, Krasny Oktyabr and Christ the Savior Cathedral are all afforded from a top seat on deck. While it might be a little breezy, you can’t beat this relaxed and picturesque way to view the city. Moscow has several piers, including the most popular pick-up points at Hotel Ukraina and Gorky Park. Opt for an evening cruise and watch the sun set over the capital’s onion domes or start the day from a different perspective with an early morning foray on the river. 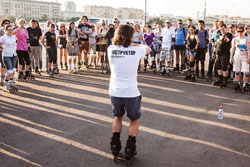 Put your skates on

Now that the ground is no longer a sludgy death-trap, it’s high time to enjoy spring with an adventure on two wheels or more. Gorky Park offers roller skate and bike hire from 200 rubles for the first hour with a deposit. The expansive cycle path along the river lets you glide all the way to Sparrow Hills and back again while you enjoy serene views of the Moscow River. Braver individuals can try skateboarding or long boarding at Sparrow Hills, or, if you’re planning an outdoor activity with a special someone, why not opt for a tandem? After all, nothing says romance like a springtime cycle along the embankment.