The warmer weather and almost dry roads are just beginning to tempt Moscow's runners out from their winter hibernation. If you're looking to set yourself a challenge, or simply want to enjoy Moscow road running, here's what's on in Moscow over the coming months.If you want more information, check out moscowmarathon.org. 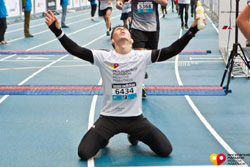 Did you over indulge at Maslenitsa? Or are you simply looking for a reason to drag your trainers out from the back of the wardrobe? It's finally time to put those New Year's fitness resolutions into practice. First Run, as the name would suggest, kicks off running season in Moscow. At five kilometers, it's a chance for seasoned runners to enjoy the spring weather and get in some practice after the winter. Newbies have the opportunity to test their training and experience a fun race in a relaxed atmosphere.  The route involves a lap of the Luzhniki Olympic Complex, and registration costs 800 rubles. Go on, sign up. Better yet, sign up that dithering friend. 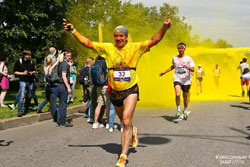 Here's a race for the less-experienced but fun-loving runner. Rock up all in white and run five kilometers while being pelted with colored powder paint. By the end you'll look like a cross between a rainbow and an explosion in a Skittles factory. The Color Run is popular all across the world and is billed as the "Happiest 5k on the planet". You can sign up as a solo runner or come with a group of friends. Lively music, a route around the Luzhniki Olympic Complex and a non-competitive emphasis make this a popular summertime event. The best bit isn't even the run, it's the party at the end where you can dance and get covered in even more paint. 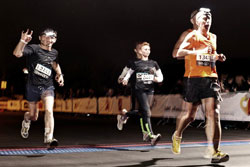 The route for Moscow's night run begins at Luzhniki and stretches along the river all the way to the Christ the Savior Cathedral. The 10-kilometer run is a unique way to take in the city by night, at its most peaceful. Vibrant street lighting and upbeat music at various points along the route contrast with the empty streets and serene nighttime atmosphere. Given the sometimes stifling heat of Moscow summer, it's probably also one of the more sensible racing options. 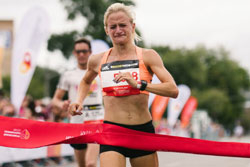 Pound the pavements to music

A half marathon with a musical twist, the music marathon is a 21.1-kilometer run that incorporates DJs, bands and live musicians to keep your energy up as you run. The route again begins at Luzhniki, taking in the curve of the Moscow River all the way to the Novospassky Bridge and back again. This offers a great chance to soak in Moscow's sights and run along the embankment. If you fancy a challenging race with a party atmosphere, this is the one for you. 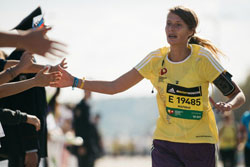 Tough run with a phenomenal atmosphere

We realize that the marathon isn't until mid-September, but running 42.2 kilometers is quite an undertaking — so we decided to warn you well in advance. The race takes a route through central Moscow passing some of the city's best known landmarks, including the Kremlin, Moscow City and several of the Seven Sisters skyscrapers. There is also a 10-kilometer route if you'd like to experience the same buzzing atmosphere but a shorter distance. 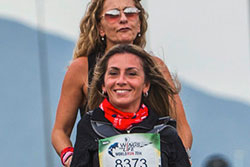 The Wings for Life run takes place in Kolomna, a city in the Moscow region less than 100 kilometers from the capital. Wings for Life aims to raise money for spinal cord research by orchestrating simultaneous races across the world in dozens of locations. The race has no set distance to complete. Competitors must run until they are overtaken by one of the "catcher" cars. A unique and exhilarating concept.

wingsforlifeworldrun.com
Kolomna. Trains from Kazansky station take about 2.5 hours to Kolomna.
May 8 at 2 p.m.

Moscow on the Weekend: VeganFest at ArtPlay

A new permanent exhibition has opened at the Worker and Collective Farm Girl Center dedicated to the construction and history of the monument towering...
news

If you have children of a literary bent, on Saturday head over to the Nekrasov Central Universal Science Library's second poetry festival, "Text. Form...
long read