Twenty years after his death, a new compilation of Mikael Tariverdiev’s film music is bringing the composer’s oeuvre more recognition outside Russia.

Tariverdiev was born to Armenian parents in 1931 in Tbilisi, Georgian SSR, and grew up in Soviet Russia, graduating from leading Soviet composer and conductor Aram Khachaturian’s class at the Moscow Gnessin Institute in 1957.

In 1961, he began to work with his long-time friend and collaborator, Mikhail Kalik, on the director’s first film, “Man Follows the Sun.” The pair continued to work together on several films, including “Goodbye, Boys!” (Do svidanya, Malchiki), a 1964 coming-of-age film, until the director defected to Israel in 1971 after refusing to cooperate with state censors.

“The music was delicate and subtle. It wasn’t loud; it would charm you and you would experience it and happily give yourself up to it. It was different. It was practically a revolution,” Kalik said about Tariverdiev’s music in a 2014 interview. 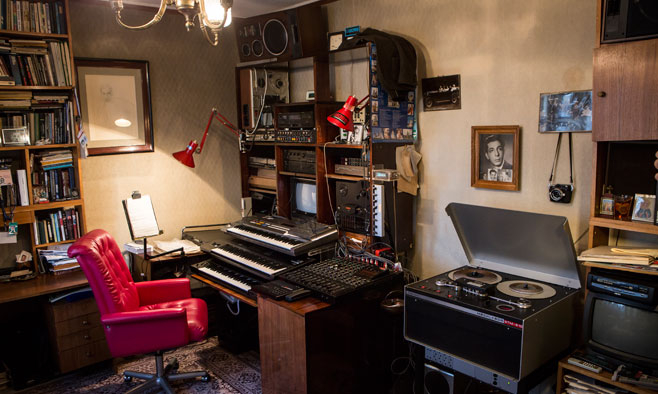 Tariverdiev's home studio has been preserved and was used for transferring his music.

Tariverdiev stayed on in the Soviet Union and became the head of the Composers’ Guild of the Soviet Cinematographer’s Union. The last film he scored was “Summer People” (Dachniki), a 1995 film directed by Sergey Ursulyak, based on the play by Maxim Gorky. He died a year later.

During his lifetime, the composer won many prizes for his music, including the Lenin Komsomol Prize – an annual award given to authors below the age of 33 for the best works in science, engineering, literature or art – in 1977; three Nika prizes for best film score; and the USSR State Prize in 1977. He was named the People’s Artist of Russia in 1986.

Introduction in the West

Singer and producer Stephen Coates of the indie band The Real Tuesday Weld has been instrumental in releasing Tariverdiev’s music outside Russia. Coates first heard Tariverdiev’s music in 2011, when a song from the film “Goodbye, Boys!” was playing in a Moscow cafe. Fascinated by what he heard, Coates began digging deeper into the composer’s work and got in touch with Tariverdiev’s widow Vera, who has been working to preserve his work and legacy. Along with Vera, Coates made new transfers of the tracks and released them in conjunction with his publishing company Antique Beat.

“Tariverdiev: Film Music” marks the composer’s first major retrospective work released in the West. The focus of the release is on his most prolific period, from the late-‘60s to mid-‘70s, but the tracks contained span over 30 years, from “The Man Overboard” (1956) to “Flight Through Memory” (1989), though they are not sequenced chronologically. “His work really did reflect nature, his self-exploration, his character, his sensibility and his passions. It reflected the things that troubled him and those that inspired him, events and people in his personal world,” Vera wrote in the album’s liner notes.

Unlike other Soviet film soundtracks of the day, Tariverdiev’s were not performed by orchestras and are rather minimal, with a singular instrument the focus of many tracks. The instrumental excerpts and miniature suites compiled here combine baroque, jazz, chamber music, folk, klezmer and other elements. They are playful and melancholic, and feel nostalgic and personal. Tariverdiev plays the piano, and on some recordings, sings the vocal cycles himself in French chanson and Russian bard styles. 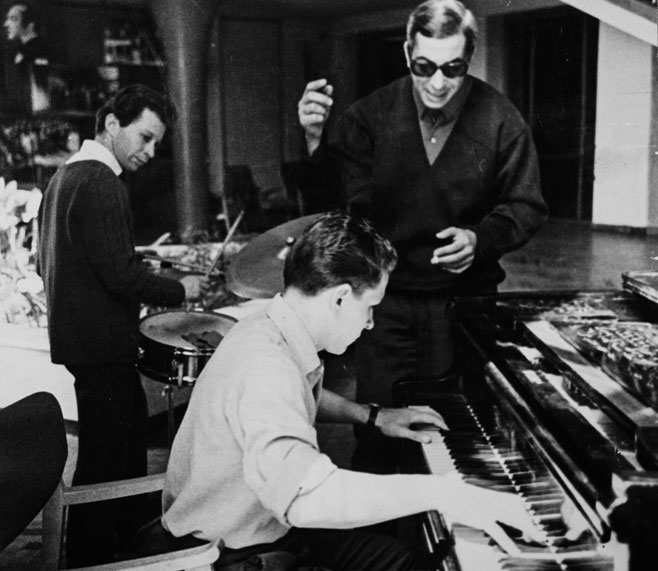 The producers hope that this giant of Soviet film composition will finally get his due recognition in the West.

For this release, audio engineer Konstantin Chernozatonsky made new transfers of the tracks, originally recorded on half-inch tapes, using Tariverdiev's own Hungarian reel-to-reel tape recorder still kept at the late composer’s Moscow apartment. While going through the archives of his music, Coates and Vera also discovered many previously unreleased versions of Tariverdiev's songs, many of which are included in “Film Music.” The accompanying booklet is also a treasure trove, with extensive liner notes, unseen archive images and personal photos, pictures of documents and artifacts, and full-color photos of the composer’s home and recording studio.

For someone who has also composed extensively for ballets and operas and theatre, the 51 tracks of his film soundtrack work, spread out over three discs, represent only the tip of the iceberg, but they are a fascinating introduction nonetheless.

“Tariverdiev: Film Music” is released by Earth Records and Antique Beat on 3CD/3LP/digital. Available at tariverdiev.bandcamp.com.

Russia's music scene is not resting on its historical laurels.
holiday abroad

Celebrate Thanksgiving with an Uzbek Chicken

This year's festivities may be canceled, but that's not stopping the Russian capital from going all-out with the decorations.
weekend profile

A Tolstoy Descendant Returns to His Roots in Yasnaya Polyana

Ilya Tolstoy left a journalism career in the big city for his ancestor’s famous estate. Now his new apple business is bearing fruit.