While some potential visitors have crossed Russia off their list, a group of humanitarian clowns still regards the country as an ideal destination.

The 22nd annual clown tour of Russia, which ended last week, brought more than 40 garishly dressed volunteers from 12 countries, including those with problematic relations with Russia — Ukraine, the United States, Japan and Holland.

They all donned red noses and joined clown-doctor Patch Adams for two weeks of clowning at orphanages, homeless shelters, veterans' homes and hospitals in Moscow and St. Petersburg.

See the Photo Gallery: If Only Clowns Ruled the World

"This is a great country to bring first-time clowns," Patch said. "Russians are so responsive. I'm here for everybody, but I prefer to clown for adults, because their suffering is deeper and at the same time their sense of humor is so much bigger. I especially enjoy the babushkas who squeal with joy," he added.

The group included first-timers and seasoned veterans who have joined Patch on other tours in some of the 81 countries where he has clowned. Petunia, a clown-debutant from Louisiana whose husband is a U.S. military veteran, observed that clowning is the antithesis of going to war. "Soldiers go to a hostile place, cause pain and death and feel bad about it; we are doing exactly the opposite," she said.

Building Relations One Smile at a Time

But the current state of relations between Russia and the West has created obstacles, even for an experienced clown. Pluck, a clown from Holland on her 6th Russia tour, said that when she was back home seeking sponsors for her annual charity clowning activities she had to downplay the role of the Moscow tour. "And I won't be bringing back any Russian souvenirs this year," she added.

Kathleen, a first-time clown from Connecticut, said that many of her American friends were baffled by or even vehemently opposed to her plan to come to Russia. "They heard that Americans were being mistreated here," she said, "but the opposite is true."

The foreign clowns were joined by Russian volunteers from Maria's Children, the local charity run by Maria Eliseeva, which works with orphanages and helps to socialize orphans entering the adult world. Young adults who had lived in orphanages were also on the clown bus, and local supporters of Maria's organization had their children join the group in order to learn the joy of giving.

Neither Raucous Ralph nor his partner Jilly-Bean had ever clowned before, but they came to Russia from Florida with open minds and a desire to spread joy. "We need to seek commonalities: emotions like joy and sorrow are the most obvious ones. Our fundamental values are the same," he said. By the end of the first week, Ralph had clearly figured out the essentials of clown communication. "For clowns, there is no language barrier: a touch, a smile, eye contact… all make us multilingual. And a clown-nose squeak or whoopee-cushion fart are the same in any language," he added. 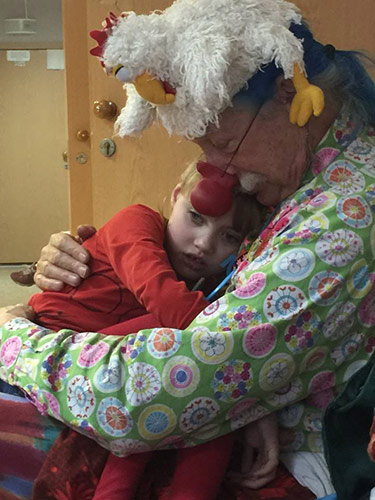 The foreign clowns were joined by Russian volunteers from Maria's Children, the local charity run by Maria Eliseeva, which works with orphanages and helps to socialize orphans entering the adult world.

One of the highlights of the clown trip is street clowning. In the past, Patch and his cohorts have been arrested for their antics on Red Square. Now the Old Arbat is the primary location for public clowning. This year's foray saw the pedestrian mall devoid of any police, but elicited plenty of smiles from local street performers and

Friday night café patrons, surprised and amused by the honking, pranking gaggle of clowns passing through. Sergei, a young Muscovite businessman, was instantly converted when he spotted last year's clown invasion of the Arbat. Seduced by their magic, he called his office to announce he was taking a vacation and joined the troop for the rest of the tour. This year he planned in advance and was on-board for the whole clown adventure. He was especially moved by visits to hospitals and homes for the elderly.

"I realized I was seeing people every day for whom it could be their last day on earth. How am I to act? I decided if it was my last day, I'd put on the red nose and clown," Sergei said.

Cees, an experienced Dutch clown whose hallmark is a rubber chicken named Shut-Up, was also on his 6th Russian clown tour. His most moving moment was when he was recognized by a resident of a homeless shelter, who remembered him from last year. "He had purchased a doughnut in anticipation of our meeting again, and insisted on sitting me down and splitting it with me," Cees said.

The presence of veterans like Cees is another reason Patch recommends first timers to join the Russia tour. "If you are a new clown, you land in a family of people who welcome you and make you feel good," Patch said. In his philosophy the "tribal" spirit is essential to the clown experience, like the wandering circuses and minstrel troops of old. "Thank God for the traffic jams," Patch said. "They allow the group members to spend a lot of time getting to know each other. The repeaters help by creating the atmosphere of love, with the people they already know. The tighter we are, the more fun we have."

The cauldron of emotion the clowns experience while helping others who are suffering and alone also builds team spirit and often changes the participants forever. "This is a trip that can show how you can live and how you feel about yourself, where there is no loneliness," Patch said. "If your life is part hell, and you come here and are loved for two weeks, with a huge amount of affection, it's addicting. And it's a vision for how things could be…between people."

Beyond personal growth, the clowns left with a sense of optimism about Russia's interaction with the West — at least people-to-people relations. "Things can't be all that bad," said Raucous Ralph, "look at the St. George's ribbon tied to the door-handle of the Mercedes."