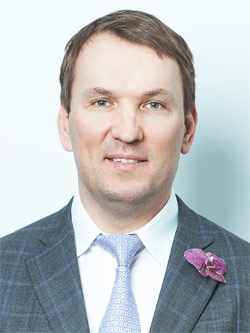 Five years ago when you joined ULMART, there were dozens of e-commerce projects, existing ones and those who were just launching in the market. Today, we see ULMART among the top industry leaders, so what are the key success points that made your company so strong in just 3-4 years?

Dmitry: Well, when I became an investor of the company in summer 2010, five years ago, I was positively shocked by the efficiency of the first fulfillment center in St. Petersburg which is still in operation, and I felt there was a tremendous opportunity for not only online retail but also for what we call the second generation of online retail with efficient fulfillment centers and faster, cheaper and more reliable value proposition. If you compare it with the Amazon model, the strength of ULMART is faster, cheaper and more reliable.

What happened so that you grew so fast in 3-4 years?

D.: We chose the particular infrastructure model that we currently live in, and we believed that was the only way to go. And we saw that our competitors tried to blindly copy Amazon's approach, and we were sure it would not work in the west nor the east, and requires a lot of capital infusions. The global scenario was repeating in Russia, so we chose the different way, and now we see that our approach is significantly more efficient.

Does ULMART have any expansion plans to enter the global markets, or does your development plan so far only consider Russia?

D.: Just Russia. The Russian retail market, with the previous exchange rate, was more than a trillion dollars just a year ago, so that's more than enough. And we have a rare chance to block up not just one but three or four industries — flash sales online, national marketplace industry, and national internet retail industry — so that is the chance that is not there in every market.

We know that Alibaba was the greatest IPO in Chinese history. Do you have ambitions to hold the largest IPO in Russian history?

D.: If you look at the current figures — in the London [Stock Exchange] you have to raise a minimum of 100 million to a billion dollars, in the United States it is probably half of that, around 400-500 million dollars, that's the limit, so that is the minimum that would make it reasonable, and we think for the development of the company we need to raise about 500 million to a billion in next 2-3 years. Next year we will definitely focus on an IPO, either in London or New York, or even maybe Hong Kong. We do many activities for that. But an IPO is actually the start of corporate public life. We would also like ULMART shares to perform well some years after the public placement. I doubt if it would be the largest IPO in Russian history, but it could be the first IPO in two years. We could become the first public company after some years in Russia, so that could be another point of attraction.

Is there something special about online consumers and their behavior in the Russian market that, in your opinion, makes them different from other global markets?

D.: I think that in spite of the obvious cultural differences in behavior, people generally like shopping. Nowadays, all of us are becoming online shoppers, all of us have these smart devices with a good screen, good connectivity, so we can explore everything online, thus it becomes only the issue of fulfillment ability. How good is performing the particular item? It means it could be delivered to the consumer's door, it could be picked up in person, at what price and how reliable would this delivery be, especially during Christmas sales. All these details are becoming more important. However, I do not see many differences in Russia when comparing with China or the United States. Even the brands are the same.

What about the competition of ULMART with other international players? Aliexpress is quite active in the Russian market, and there are new retailers launching everyday. What will keep ULMART on top of its competition in coming years?

D.: First of all, we made our own cross-boarder solution by allowing our customers to shop not only for goods which are already in Russia in our fulfillment centers, but also for goods which are outside of Russia but available on our website. We have our own approach that provides faster and more reliable delivery than using the Russian postal service or another courier company. Nevertheless, we still have big doubts for the future of cross-border solutions. We believe that it will be present in a certain volume, but not so significant if you look at the whole retail market. According to current estimations it is from 1-3 billion dollars. The question is whether it will be 30 billion in five years. We don't think so. In our opinion, it will grow for sure, due to ULMART solutions, but by the time the whole internet retail market reaches 60 billion dollars, the cross-border trade will not be more than 10 percent. Firstly, the flow of fake products will be stopped by that time. The government will no longer allow the sale of products without VAT and customs duties. Secondly, customers are tired of cross-border trade as it takes a long time, the delivery is not reliable, and goods are nonexchangeable and irretrievable. Thirdly, ULMART-type solutions are clear, efficient and convenient so that they will replace cross-border ones. And fourthly, the producers will adapt to these policies as well as they do everywhere in the world.

D.: ULMART development is very closely connected with the construction of the new generation fulfillment centers that we showed in Munich. We wanted to welcome the world's real estate community — developers, land owners, construction and property management companies, financial institutions that are interested in infrastructure projects rather than internet. A few Russian regions like Tula or Samara came to discuss the construction of new generation fulfillment centers there. We also presented our second project, a new wholesale club RYADY. Together, ULMART and RYADY become the core of the retail and wholesale parks MIZAJ that we presented in EXPO REAL in the real estate angle. This was actually the second real estate event for us after MIPIM, and we are quite satisfied.

Being one of the leaders in Russian e-commerce and also following the best international retailers' development, what do you think is going to happen in online retail in the next 10 years? What would be the key trends of its development?

D.: Well, the backbone of the retail infrastructure will shift slightly from the first generation to the second generation of what ULMART is building, such as customer-friendly fulfillment centers. The market will also become, to a certain degree, what we call e-commerce based: the trade will be not only form fulfillment centers but also from the area around it, take used cars as an example. We will also have a postal sorting center right there, so that you will receive your package from China from the same location where you receive goods from ULMART — the fulfillment center. We think the whole world will switch to the ULMART model. It is much more efficient. We discussed this with some very prominent online retailers. They do not have a choice really. They will have to build more efficient infrastructure which, by happenstance, was first developed in Russia.