The premiere of Nikolai Erdman's tragicomedy "The Suicide" at the Yermolova Theater, a stone's throw from the Kremlin, means this classic Soviet-era play has never been so close to the source of the misfortune that nearly killed it 83 years ago.

After the play was banned twice in the late 1920s and early 1930s, Stalin sent a note from his Kremlin office in 1931 giving Konstantin Stanislavsky the right to rehearse it at the Moscow Art Theater. For good measure, along with his permission, he noted that some of his closest advisers warned him that the play was "rather empty and even dangerous."

The Art Theater abandoned rehearsals after a short time, but Vsevolod Meyerhold's theater seized the challenge and rehearsed the play throughout the summer of 1932.

Meyerhold was not finished in August 1932 when he decided it was time to see if the Kremlin would look favorably upon his work. Stalin was expected to attend a late-night run-through, but his henchman Lazar Kaganovich came instead.

Kaganovich brought down the hammer and the play did not see the light of day again for 37 years, when productions based on a smuggled copy that slipped out during the Prague Spring in 1968 cropped up in Europe a year later.

"The Suicide," then a recognized classic of modern comic drama, finally entered the Russian repertoire during the perestroika years.

This makes Denis Azarov's production at the Yermolova Theater something of a homecoming.

That is due in part to the Yermolova's address, three buildings from the beginning of Tverskaya Ulitsa. It's pretty hard to get closer to the Kremlin than that.

Another reason is that the Meyerhold Theater occupied the building now known as the Yermolova during the 1930s when it lacked a permanent home. I don't know if Meyerhold rehearsed in this very building, but it's possible. Even if he didn't, Azarov's "Suicide" is now in repertory precisely where Meyerhold's production would have run had it opened over 80 years ago.

Working with designer Dmitry Gorbas, Azarov hints at the gaping hole in history through which the play comes to us today.

Most of the performance takes place in a small, brightly-colored box where the characters constantly bump into one another. But it is always surrounded by a huge, deep blue, empty space — perhaps a visual impression of eternity — in which stray people stand like statues or, perhaps like conductors occasionally controlling the action. 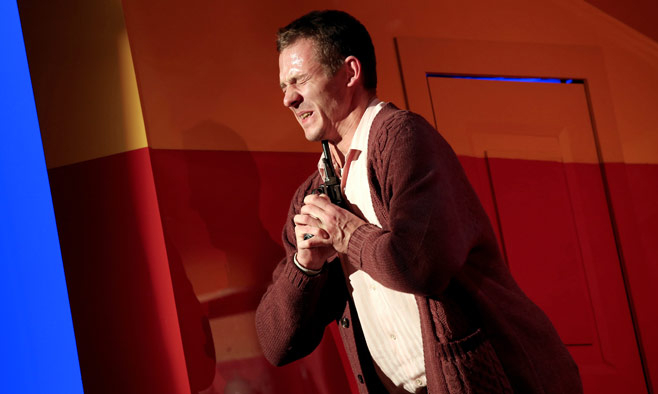 Will he kill himself or not? A variety of nosy neighbors are betting on it.

Erdman's story pits the beleaguered, penniless Semyon against an army of people who would use his misfortune to further their own causes. All he wants to do is satisfy his hunger, but the rumor gets out that he is so distraught he will kill himself.

That's all it takes for opportunists around him to go after him like sharks in a feeding frenzy.

Don't be mistaken. "The Suicide" is incredibly funny. At least, it should be. Erdman, one of the finest comic authors ever to write in Russian, filled his play with jokes, puns, double entendres, linguistic twists and unexpected situational comedy.

That is why this play can hit an audience so hard. Filled with raucous humor, it tells a tale of people virtually using a fellow human to death. In principle, "The Suicide" should turn us inside-out as we laugh.

That doesn't happen at the Yermolova.

Probably in an effort to keep actors from riding too hard on the jokes Erdman planted in his text, Azarov has his cast rattle off their lines so fast there is barely space or time for laughter to arise.

In a similar fashion, the box where much of the performance occurs is so small and crammed that we never feel as though we are invited inside the performance. We are virtually always on the outside peering in at things we neither see nor hear well.

A curious thing happens as a result. This "Suicide" is more harrowing than hilarious.

I'm not sure that's the best way to do this play, but it is what it is. This is the most chilling, disconcerting interpretation I have ever seen of it.

Whether that's good or bad, I'll say this: When a policeman in the finale beckons Semyon to approach him, you understand why he turns and runs from the hall instead.