"Hunting for mushrooms is one of Russia's purest traditions, unlike fishing or hunting that involve alcohol or killing," Dmitry Krymov told me. "It's always a childlike or family thing, almost like a prayer, a plot to achieve hope or unity."

My question had been simple. I wanted to know about the title of Krymov's new production, "Russian Blues: Hunting for Mushrooms," which opens Oct. 8 and plays on Oct. 9 and 10 at the School of Dramatic Art.

But, as this director often does, he gave me much more than I expected. 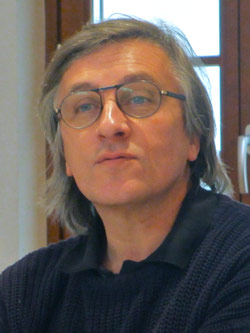 "It is the search for unity, for hope, an idea that will save us," he continued, riffing on thoughts that came as he spoke. "It's like the search for the blue bird of happiness. You come home from the forest with lots of mushrooms. Even if you have no money you can eat."

Well, this sounds quite idyllic, I think to myself. But before I can comment on that, Krymov throws a monkey wrench into my thoughts.

"We've come up with a very good end to the show," he says. "Quite terrible. Funny and terrible. I don't know if I did it well, but for me the ending is terrible."

I suddenly remembered a day many years ago when I attended one of Krymov's classes at the Russian Academy of Theater Art, where he teaches stage design.

A student had created a lovely model of a stage set, a folklorish hut in the woods with a nice picket fence around it. Outside the fence, on the wild side of things, a benevolent bear sat calmly.

Krymov wasn't convinced by the student's work. He launched into a monologue that I wish to this day I had recorded on some device other than my miserable memory.

But the gist of what he told his students was this: "You are Russians, you grew up in Russia, you will work in the Russian theater. As such, there is one thing you must never forget — there is no such thing as an idyll in Russia. If there is a bear in the concept of your design, then there is blood and mayhem, too. This idyllic model is a lie. You cannot lie in the theater."

"Russian Blues: Hunting for Mushrooms" was created in a way that Krymov has used in the past. He has an idea for how the show will play out. He brings that idea to his actors who flesh out the director's plans in devised scenes, and then, once everyone moves into the rehearsal room, the real work begins.

"At first, I do everything," he explains. "Then, of 10 things I planned, we throw out three. Then I dream up 30 more that we work on. It's not like we do this equally. I am the primary source. But in the middle of the process everyone is coming together to make their contribution." 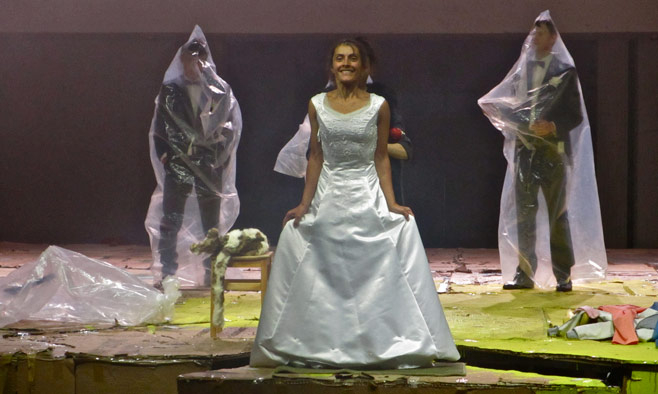 A wedding in "Russian Blues" may or may not be cause for celebration.

"Russian Blues" follows a series of scenes and characters that are loosely bound by the topic of mushrooms. Among others they include a family heading out to gather mushrooms; a submarine crew preparing to go to sea; a bride trying on her wedding dress; a pair of fishermen braving the ice; and a storyteller who sits high above the action and narrates everything as he sees it — whether that is what the audience sees or not.

Krymov calls him "a kind of excursion leader" who occasionally describes things for the audience precisely as they are on stage, but who, just as often, provides a narrative line that does not correspond to reality.

"From the very beginning I wanted us to see one thing with our eyes, while we heard another with our ears," Krymov said. 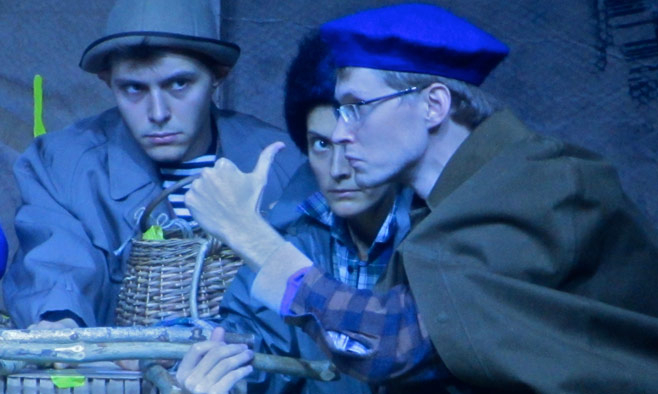 As a family hunts for mushrooms they remember their collective past.

Krymov's productions always create beautiful visions with the simplest of ingredients — lighting, cardboard, paint, wood and cloth. But "Russian Blues" — this "terrible" new piece as the creator describes it — may be his most beautiful work of all.

I have not seen the show that will open Oct. 8, but I attended dress rehearsals in September that were filled with symphonies of light cutting through forests of trees, illuminating the cold underworld of the ocean, and transforming mundane, daily events into strangely fantastic adventures drawn from deep dreams that could only be Russian.