The early works of Russian avant-garde architects Alexander Brodsky and Ilya Utkin — copper plate etchings of dystopian and fantastical worlds — are in the spotlight again, with an exhibition of the duo's work at the Tate Modern in London as part of the gallery's ongoing "Poetry and Dream" displays, and a reprint of "Brodsky & Utkin," a collected volume of their etchings.

The duo, who met as students in 1972 at the Moscow Institute of Architecture, combines architecture with fine art in their extremely detailed and dense etchings, many of which took years to make. Since they never intended for their proposals to ever be realized, this work came to be known as "paper architecture." Despite this, it has influenced countless younger architects and won the team international acclaim.

Taya Osipova, an architect working in Moscow, spoke to The Moscow Times about the significance of paper architecture. "For us as students, it was a translation of architectural language into the field of art, an experiment with imagination and a professional way to express an idea that went beyond the understanding of space. Unlike the routine of architectural practice, it looked like a way to create something sacred, desirable — a different place."

Most of the examples presented in "Brodsky & Utkin" were submitted as competition entries for Japan Architect magazine's annual conceptual design competitions in the 1980s, when they were finally allowed to show their work outside the Soviet Union. First published in 1991 and long out of print, the book is a comprehensive overview of the duo's etchings — many of which won prizes — that are a window into a fantastical world somewhere between dream and reality where memories of the past and visions of the future collide.

In a new introduction to the book, architecture professor Alexander Mergold writes, "There is an atmospheric quality that feels uncannily familiar, somehow long forgotten, but just on the verge of remembrance. All this accomplished by a monochrome etching! This lingering familiarity, the liminal relationship between the image itself and the fleeting sense of reminiscence that it evokes, is what makes the work of Brodsky and Utkin irresistible — beyond geography and time."

For example, "Columbarium Habitabile" proposes a huge concrete facility — not unlike the monumental buildings being built in the Soviet Union — in the middle of a city where buildings slated for destruction can be preserved on a shelf, on condition that their inhabitants continue living there. A huge wrecking ball hangs over the houses, threatening to flatten any building that is vacated. Brodsky explained that this piece, along with "Columbarium Architecturae" (Museum of Disappearing Buildings), was made in response to the pace of change and the rapid destruction of old and beautiful buildings in the historical center of Moscow in the 1980s, all in the name of modernity. 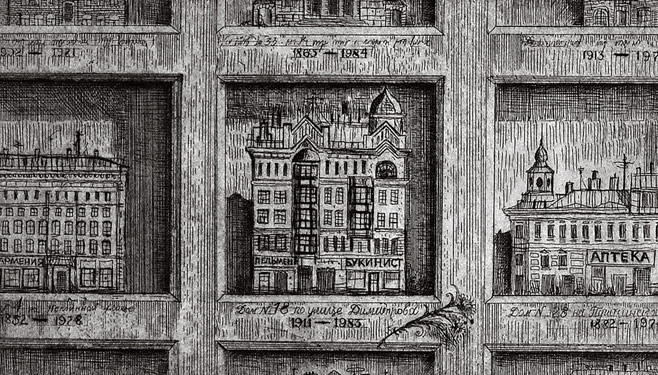 Brodsky and Utkin's architectural fairy tales on paper are chaotic, elaborate, and reflect on the postmodern condition and the failure of socialism. Their etchings of cities of glass, and the alienating and oppressive metropolises take from classical mythology, science fiction, and Giovanni Battista Piranesi, an 18th-century Italian artist famous for his etchings of Rome. Brodsky cited Piranesi as one of the duo's most important influences, particularly his "Carceri d'invenzione" (Imaginary Prisons) series.

Brodsky and Utkin's work can be seen as a form of criticism of Soviet architecture in the 1970s and 1980s, when it was completely controlled by the state, and prefabricated buildings, known for their austere utilitarianism, were being erected across the country.

As architecture students in a regime that placed limits on building design, Brodsky and Utkin felt that to be an architect was to be a little part of a huge machine. The choice they had to make, Brodsky said in a lecture delivered in 2013, was either to build or to be independent. They chose to be artists without hesitation, preferring to wait for the possibility of building something they could call their own work.

The wait was long, and the pair ended their collaboration in 1993 to pursue their individual practices, though they have remained close friends. Now 60 years old, with a reputation as one of Russia's greatest living architects, Brodsky works out of a studio in the attic of Moscow's Museum of Architecture.

His first building commission only came in 2002, and he has completed a number of works constructed with local and recycled materials and incorporating elements of Soviet architecture and a dash of nostalgia, a style that has come to be known as "New Russian Architecture."

"They separated the author from the real world in their paper works and created a new reality and something alien, the same way as early Constructivists did. Maybe this is why their projects are so remarkable and hard to forget. For me the significance of paper architecture is in bringing architectural design into the field of philosophy and reflection, which is an essential part for any project design," Osipova said about the legacy of paper architecture and the influence Brodsky and Utkin have had on her work and Russian architects in general.

"Brodsky & Utkin" is published by Princeton Architectural Press, September 2015. Brodsky and Utkin's etchings are currently on view at the Tate Modern, London.

Where to cool off and splash around on hot summer days.
heroes on bikes

Feast on Moroccan Cuisine This Weekend

Our friends and neighbors at the Hyatt Regency are offering a Moroccan feast.