The Pushkin Museum of Fine Arts just opened a new exhibition entitled "A Collection Forgotten for a Century." The 300 or so items in the exhibit are medals, coins and tokens forming part of a collection previously held in the Museum of Russian History Abroad in Berlin, founded by the Brotherhood of St. Vladimir.

And therein lies a tale.

The Brotherhood of St. Vladimir was founded in Berlin in 1890 by archpriest Alexei Maltsev, the prior of the church of the Russian embassy in the German capital. As the oldest Russian benevolent society in Germany, the Brotherhood provided refuge for emigrating Russians who had fallen on hard times. Its eminent members included representatives of the Russian Orthodox Church, aristocracy, diplomats, bankers and even members of the Romanov dynasty.

Maltsev opened the Museum of Russian History Abroad in 1897 and began to build up its collection of coins, medals, prints and various religious items from objects donated by the Brotherhood's members, either brought over from Russia or acquired in Germany. At the outbreak of the First World War, however, the Brotherhood was forced to suspend its activities. Maltsev left Berlin and died a year later in Kislovodsk, and the museum and its collection were thought to have been lost. 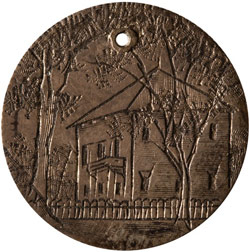 The Brotherhood house on a coin.

But Maltsev had declared that "the purpose of the Historical Museum is the acquisition and preservation of these monuments," and preserve them he did. Before Maltsev left Berlin, he handed the museum's collection over to a German named Oscar Kvaas, whose daughter, Elizabeth, in turn donated the collection to the USSR in 1956. Despite having theoretically been in the Pushkin Museum of Fine Arts' archive for almost 60 years, only the letter of donation from Kvaas, rediscovered in 2010, shed light on the collection. And so, after five years of research and identification, it is just over a century since these objects have been on display to the public.

Not all of the Brotherhood's collection is on display at this exhibition, but its curator, Ulyana Volkova, said that they are showing "the most interesting coins and medals — they are exhibits which could also be considered to be pieces of art." The objects in the exhibition come from far and wide, and while at first glance they might not seem particularly interesting, each medal, coin and token has a very specific story. For instance, on display are two medals of unassuming appearance. On closer inspection, one is revealed to be a commemorative token celebrating the opening of the Bronze Horseman monument in St. Petersburg in 1782. The other is a satirical coin made in France to "celebrate" the country's defeat in the Franco-Prussian War. The inscription reads: "Napoleon III, The Miserable, 80,000 prisoners."

Many of the objects — some delicate, others massive — focus on Russian history, both military and general. They mark major events in the country's past, often with emphasis on conflicts, emperors and empresses, and religious commemorations such as the 900th anniversary of the Christianization of Kievan Rus in 1888, courtesy of the Brotherhood's namesake, Prince Vladimir. This said, they are not exclusively Russian artifacts, and present in the exhibition are coins from England, France, Germany, Austria and Poland, as well as Ancient Greek and Roman coins dating as far back as 479 B.C.