Words can be fashionable. They may be dangerous. The word of this year in Russian culture, I would argue, has shades of both.

The lexical item of "obscurantism"—"mrakobesie" in Russian, suggesting demonic murk and gloom — is everywhere to be found in discussions of art these days.

"In my opinion, it is total obscurantism," director Roman Viktyuk told newspaper Izvestia in late June when asked about a request from the prosecutor's office about potential pornographic content in his theater's production of Oscar Wilde's "Salome."

Respected critic, administrator and translator Pavel Rudnev listed the "gloomy obscurantist forces" that "ganged up on theater" this year as the season's biggest failure in a list compiled for Teatral magazine of the waning season's best and worst events.

It was a season of unsettling developments, in which culture at large was repeatedly put on the defensive.

Arguably, the year's most scandalous incident took place in February when a church organization accused a production of Wagner's "Tannhauser" at the Novosibirsk Opera and Ballet Theater of "offending the faith" of believers. It took its complaint to court, demanding that director Timofei Kulyabin and the theater's managing director Boris Mezdrich both be jailed.

The suit failed, the judge throwing it out of court just five days after the trial began on March 5.

By then the damage was done, however. Culture Minister Vladimir Medinsky fired Mezdrich anyway, replacing him with a patsy who immediately pulled "Tannhauser" out of the theater's repertory.

Not far behind the "Tannhauser" scandal was the season-long soap opera involving Moscow's Teatr.doc.

For the first 12 years of its life the tiny independent theater prided itself on being the "theater where no one acts," but it added two new slogans this year: "the theater that does not fear," and "the theater that moves."

Doc, as the playhouse is known colloquially, was kicked out of two spaces in the course of the season. Unbowed by the harassment, it settled into its third home at the end of June.

The city pushed Doc out of its historic space on Tryokhprudny Pereulok in late December, claiming the reason was fire safety violations, but using a bomb squad and heavy-handed tactics, including detentions and threats, to accomplish its goals.

Doc reopened at a new space in the Baumansky neighborhood just six weeks later. But when it opened a show called "The Bolotnaya Square Case" on the third anniversary of the infamous May 6 clash between protesters and police on Bolotnaya Square, the authorities were not amused.

Three weeks of investigations and interrogations by criminal investigators, fire inspectors and local beat policemen followed, after which Doc's new landlord informed them he was canceling their lease. They were given one month to vacate the premises. 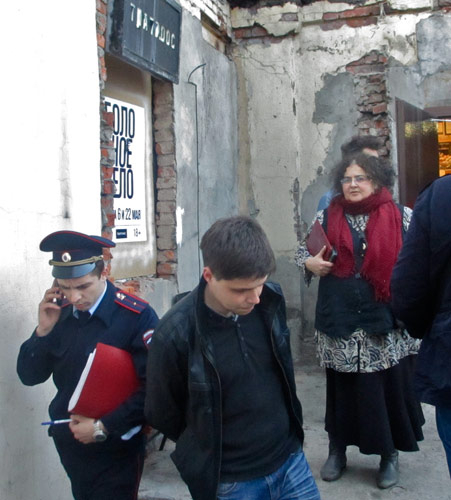 Authorities and inspectors were not amused at Teater.doc reopening.

No official reason can be identified for the sudden move for, under the law, the landlord need not declare a reason for evicting a tenant. For good measure, however, the city slapped a 300,000 ruble fine (nearly $16,000 in early June) on Doc for allegedly violating fire regulations again.

As the season wound down and the second Doc scandal of the year played itself out, a cluster of other restrictive or repressive incidents unfolded.

Russian President Vladimir Putin in late May signed the so-called law of "undesirable organizations," the chief aim of which is to ban so-called "foreign agents" from having impact on Russian cultural or political life. No theatrical organizations have actually been named yet under this law, although there are concerns it could affect the Sakharov Center and the Memorial Society. Both have conducted active theatrical programs in recent years.

In mid-June a self-proclaimed cultural organization named Art Without Borders asked the Moscow Prosecutor's Office to investigate six Moscow theaters for potential "pornography." The theaters singled out were the Gogol Center, the Satirikon, the Meyerhold Center, the Moscow Art Theater, the Sovremennik, and the Viktyuk Theater.

In all cases, the theaters were obliged to divulge information about the directors of certain shows, provide descriptions of the shows, and to declare if minors were included among the casts of actors. Many, like the Viktyuk and the Satirikon, satisfied the prosecutor's demands merely by sending copies of the play texts.

As such, the flap appears to have ended without any actions taken by officials, but in the overall atmosphere of increasing intimidation, one suspects this is not the last we will hear from Art Without Borders.

Finally, recent weeks have seen the venerable Golden Mask Festival come under attack from various camps, including the Ministry of Culture, which has stated that the festival should be more proactive in supporting "traditional Russian values." Other detractors have accused the festival of becoming a monopoly, both in financial and ideological terms.

The bickering among those defending and supporting the festival administration has taken on a contentious, occasionally foul-mouthed nature.

As sad as that may be, it suits the mood of the cultural world these days. Murky demons do seem to be on the loose.