It is the unavoidable topic if you mention Teatr.doc for any reason — the war that city authorities are waging against this tiny, popular Moscow theater.

For instance, I would love to devote the space I have here today solely to a show called "Forgiving Betrayal." It is one of several small, issue-oriented plays that Yelena Gremina has written and directed of late. It is one of 10 new shows she promised to premiere by the end of this season after Doc was kicked out of its old space in the city center, and relocated in February to a cozy, 18th-century building on Spartakovskaya Ulitsa.

But there it is. I'm already off topic. There's no other way to talk about this playhouse these days.

Because in May the authorities kicked Doc out of its new space too. It's tedious, but it's true. And now, through Monday, Gremina and Co. are playing out their last shows at the Spartakovskaya home.

It is — was — a beautiful little place that was renovated with impeccable rustic and theatrical taste. But it's on the way out now. See it while you can.

The forcible removal of Doc from its second home in six months might sound like a tragedy in the making. But Gremina, a soft-spoken woman with a shy smile and sparkly eyes, is not about to give in to tragedy. She has already found a new, third, location for Doc on Maly Kazyonny Pereulok near Ulitsa Pokrovka. She insists it will open Tuesday, no matter what the fates, the gods or the authorities send her way.

As for "Forgiving Betrayal," it will christen the new space on Tuesday. Consider it the show's second birth. The show itself, regardless of where it plays, is a sign of the kinds of shows Doc has been doing of late.

In the early days following its founding in 2002, the theater experimented with playwrights taking real-life stories and turning them into something similar to traditional plays. They were document- or interview-based, but they were fairly traditional texts.

In the latter part of the last decade, the theater began championing innovative new plays written by some of the best writers of the time, Pavel Pryazhko, Maxim Kurochkin, Yelena Isayeva, Mikhail and Vyacheslav Durnenkov, to name just a few. 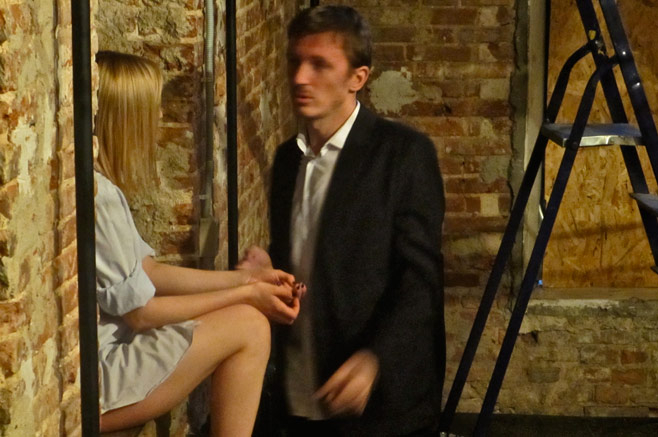 "Forgiving Betrayal" will open in the new Teatr.doc performance space.

Recently the focus has shifted again. Gremina, who stages or supervises many of them, has gone back to documentary sources, but with a big twist. She is not interested in plays, meaning the kind that Chekhov or Shakespeare would have written. She puts actors (and, sometimes, non-actors) on stage and watches them play with the kernel of an idea in order to see what comes of it.

In "Forgiving Betrayal," she frequently makes use of the audience, as the actors ask audience members to share opinions and experiences. It is not a discussion group, of course, but it is a discussion group within the confines of a performance telling the story of two couples whose peace and stability were destroyed by sexual and emotional betrayal.

Some of the questions directed at the audience include: "Is there a specific sensation that you are being betrayed?" or "How many of you have peeked at your partner's text messages?" or "Who among you has known that a friend is being cheated on, but you didn't say anything?"

What we see at a certain point is that Gremina is building and framing a conversation about integrity, honesty, trust and faith.

But the true underlying topic here is decency. What does it take for a person to be decent, and what has to happen for someone to cross the line and lose it?

And when decency is gone, what comes next?

This is a very short, very simple show, running just an hour. But it is unpredictable, intriguing, often funny and often wise.

With shows like "Forgiving Betrayal," Teatr.doc continues, despite all the odds, to pursue its mission of encouraging Russian society to face its demons.