Benois de la Danse is one of the most important annual events in the world of ballet. Since its founding in 1992 by then-Bolshoi Theater ballet artistic director Yury Grigorovich, it has honored a host of great dancers and choreographers with its awards and presented an often fascinating glimpse of what is to be found on dance stages throughout the world.

But the event does have its unusual features. First of all, the nominees for its awards are chosen by the members of its jury. The jury, perpetually chaired by Grigorovich, is made up almost entirely of directors, dancers and coaches of various ballet companies who quite understandably tend to nominate dancers of their own and choreographers of their companies' productions. Secondly, not all of the nominees have either the free time or the inclination to travel to Moscow for the awards ceremony.

This year's Benois de la Danse, which took place over two days at the end of May in its traditional home, the Bolshoi Theater, was particularly marked by the absence of award winners.

Nearly sweeping the competition was "The Winter's Tale," a lavish dance production of William Shakespeare's seldom-performed play of the same title premiered last season by Britain's Royal Ballet. For it, Christopher Wheeldon picked up the Best Choreographer prize, Edward Watson the prize for Best Male Dancer and Joby Talbot the prize for Best Composer. None of the three, however, was on hand for the awards ceremony, leaving it to Kevin O'Hare, the Royal Ballet director and a Benois jury member, to accept the awards on their behalf.

The absence of Watson, a star at last summer's visit to Moscow by the Royal Ballet, proved particularly unfortunate, as it meant that nothing at all was seen live on stage of "The Winter's Tale" at the performance by winners and nominees that followed the handing out of awards.

The prize for Best Female Dancer went to the Bolshoi's Svetlana Zakharova, appropriately enough for her overwhelming performance of the leading role in John Neumeier's "The Lady of the Camellias," but perhaps less deserved for her Mekhmene Banu in the Bolshoi's revival of Grigorovich's "A Legend of Love." Zakharova was present to receive her prize, but rather curiously failed to dance in an excerpt from either of her nominated roles.

Receiving the award for Lifetime Achievement in Art was Brigitte Lefevre, the iron-willed director of the Paris Opera Ballet from 1994 until her retirement last October. A new award, jointly bestowed by Benois de la Danse and Italy's prestigious Positano Premia La Danza, which honors the great Moscow-born dancer and choreographer Leonide Massine, went to Ana Laguna, the wife and muse of Swedish choreographer Mats Ek. 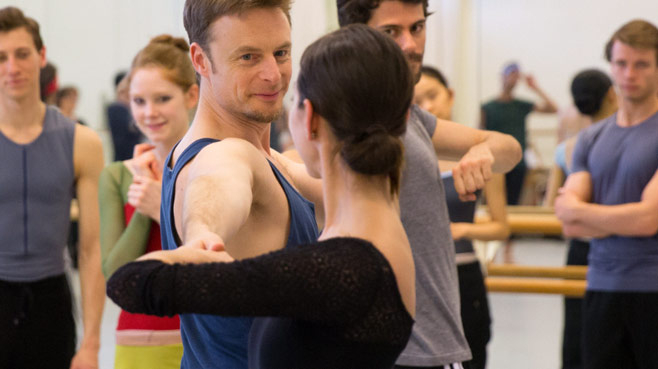 The dancing that followed the awards ceremony and on the next evening (which featured past Benois winners and nominees) had its customary ups and downs.

Leaving aside the "downs," there was a fair amount deserving of praise on both evenings: a duet from nominated choreographer Jean-Christophe Maillot's Bolshoi production of "The Taming of the Shrew," danced by previous Benois winners Olga Smirnova and Semyon Chudin; a brief excerpt from a ballet recently created by Mats Ek for Germany's Ballett am Rhein and titled "Raetikka" that called upon that company's soloist, Yuno Kato, to execute a series of extraordinarily complicated movements; a ballet by veteran Dutch choreographer Hans van Manen to music of Erik Satie and the familiar "Dying Swan" of Mikhail Fokin that found Mariinsky prima ballerina Ulyana Lopatkina in absolutely first-rate form; the very welcome appearance by The Hamburg Ballet's lovely principal dancer Sylvia Azzoni in works by John Neumeier and Roland Petit; and the very sympathetic and technically assured interpretations of roles in two other ballets by Petit that seemed to mark young Italian principal soloist of Milan's Teatro alla Scala, Nicoletta Manni, as a star-in-the-making.

Beyond all of that, however, and surely the most memorable moment of this year's Benois was young Swedish choreographer Alexander Ekman's totally original and spur-of-the-moment solo creation called "What I Think When I'm at the Bolshoi Theater," which found Ekman delivering a spoken monologue, interspersed and illustrated by moments of utterly delightful madcap dancing.

Unfortunately, Moscow had no chance to see more than brief video excerpts of the work for which Ekman received a Best Choreographer nomination, a novel take on the most famous of all ballets and titled "A Swan Lake." Created for Oslo's Norwegian National Ballet, the work features a 16-meter-square pool filled with some 6,000 liters of water. "The Bolshoi wouldn't allow that," Ekman said in his monologue. "But they were willing to permit this," he continued, holding up glass of water — whereupon he proceeded to pour its contents onto the stage, eventually mopping them up with a towel.