VIENNA — Russia Eurovision hopeful Polina Gagarina sailed into the final with a confident performance in the semifinal Tuesday, where she was met with neither boos nor catcalls, although rainbow flags, a symbol of gay pride, did notably appear when she performed.

Organizers were fearful that the audience would boo Gagarina as they booed last year's Russian entry.

Speaking before the start of the semifinal, Eurovision executive supervisor Jon Ola Sand said they would ask "people to receive everyone in a friendly way and to leave politics outside the arena."

Sand recalled working with the Tolmachevy Twins, Russia's representative in the contest in 2014, in Copenhagen: "I met them after the show and they were crying," he said. "Two young girls who bear no responsibility for their country."

Fans of the kitschy Eurovision contest, which has huge support in the gay community, have taken against Russia because of its record on gay rights. Russia has seen gay rights parades banned and the passing of a law that has made it illegal to promote "non-traditional sexual relations to minors." 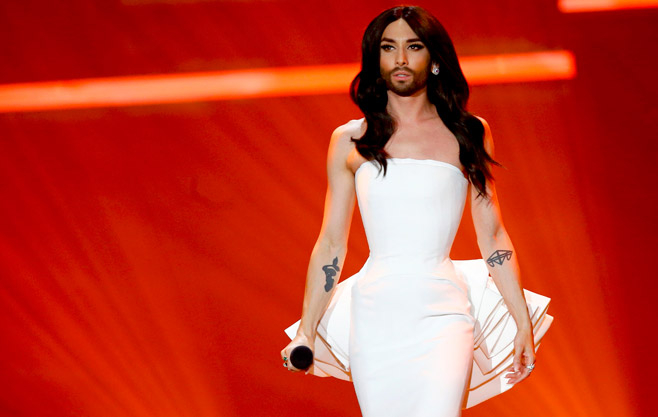 Only supportive sounds could be heard during Gagarina's performance and she was visibly on a high when she finished her song, belting out the words "sing it out, sing it out" at the end.

As the audience cheered, a giddy and teary Gagarina smiled and shouted thank you in Russian.

"It was amazing, it was like have a son or a baby, I cried," said Gagarina at a news conference after the show. "I'm so thankful for the warmest welcome because everyone was singing with me and it was just amazing, really, and thank you all who sang with us."

Gagarina was asked at the news conference why she hadn't sung a song for LGBT rights specifically at the contest. "I just can say that my song is really about love and is really about that everybody is speaking one language — the language of love, and it is no different who you are," she said. "We are people and we can make bridges and I saw it today." And then she started crying again.