Contribute Today
By Anastasia Bazenkova
May 17, 2015

Russian cinemas are currently showing "The Dawns Here Are Quiet," the latest remake of a Soviet classic, in this case the 1972 war film of the same name, which was nominated for Best Foreign-Language Film at the Academy Awards.

The new film, which premiered in the Kremlin Palace last month, is half the length of the original and a far glossier affair, more Hollywood than 1970s Soviet cinema and has had a mixed reaction. Actress Irina Shevchuk, who starred in the original film, refused to watch the new screen adaptation.

The three-hour original, directed by Stanislav Rostotsky, tells the tragic tale of five young girls working as anti-aircraft gunners in Karelia and their male officer. The film was based on the 1969 book of the same name by Boris Vasiliev and is one of the most beloved Soviet war films.

When a DVD of the original film was released in the United States in 2005, The Village Voice newspaper called it a "patient, epic piece of late-Soviet propa-drama," saying it was "a more genuine portrait of wartime costs than most pre–[President Jimmy] Carter administration stateside films."

"We knew that the media, critics and viewers of the film, comparing it to the film by Rostotsky, would use the word 'remake,'" said director Renat Davletyarov, speaking at a news conference before the premiere. "I would prefer to call it a new screen adaptation."

The original film is one of the most popular Soviet films in China. The book the film is based on is part of the school curriculum in China, and 10 years ago a television series of the same name was made by Chinese filmmakers using Russian actors.

The new film will likely be released in China, said film producer Vladislav Ryashin. In September the 70th anniversary of the victory over Japan will be celebrated in China, he said, and "they want to time the release in China to coincide with this event."

Davletyarov welcomed veterans to the premiere and said that the film was shot primarily for young people so that they understand what war was.

Casting showed that most of those who auditioned weren't familiar with the story or the first adaptation, according to the film's producer Vladislav Ryashin. 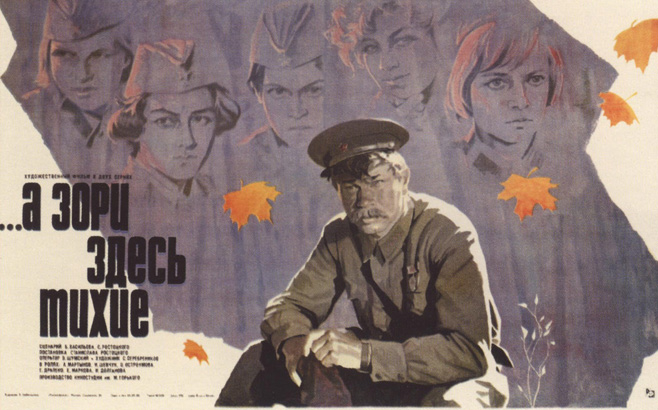 A poster for the original 1972 movie classic "The Dawns Here Are Quiet."

"On the one hand it was very sad, on the other hand I thought it was God's will to make this film so that the people could watch it and then maybe read the book," said Davletyarov.

After auditioning as many as a thousand candidates, five girls were selected to perform the leading parts. Davletyarov selected his own wife, Yevgenia Malakhova, as one of the five. Kristina Asmus, who shot to fame in the television series "Interns," Russia's version of "Scrubs," was another one of the five.

The film follows Senior Sergeant Vaskov, who is stationed on a remote artillery base with five young female anti-aircraft gunners. One day, the group spots two German paratroopers, who they think have been sent to sabotage the railroad. But there are not two Germans but 16 and the group faces a deadly, heartbreaking battle for survival.

The film used two German actors for the German paratroopers, even though they barely say a word in the whole movie.

"While making a movie, I was thinking of how to make the Germans look scary," said Davletyarov. "So I was picturing orcs, and the less they talk but growl in the film, the better."

Ultimately, Davletyarov's version is both similar and radically different from the Soviet classic, more a modern action film than a war film, stuffed with special effects and some very modern filmmaking. It also adds in sexual tension between the sergeant and the young gunners, something distinctly absent in the original.

The film also ends oddly on a song performed and recorded by the group Lyube, an aging Russian group, famous for its patriotic songs about Russia, which counts President Vladimir Putin as one of its biggest fans.

Afisha critic Stanislav Zelvensky had mixed feelings about the film in his review, saying there was no need for the remake, but that it was done well.

Remaking Soviet films has become a popular trend in Russia, and around 20 remakes of Soviet-era classics have been released in the last 15 years.

"Now we are really like Hollywood — lively remakes of classics come out and everything is sort of OK and just one thing is unclear: why?"