This article first appeared in the online magazine The Calvert Journal, a guide to the new east.

The 80s were divided into two five-year periods, one black, one white. First there were the death throes of Soviet power and of the succession of short-lived general secretaries that embodied it, played out to the accompaniment of an extraordinary unstoppered carnival of underground art (from Mukhomory to the Necrorealists, from Alexander Bashlachev to Sergei Kuryokhin, from Ilya Kabakov to Pyotr Mamonov). This was followed by the era of perestroika and glasnost, an era of everything for sale — the end of an heroic age. The 80s ended up like a lunar landscape: its heroes dead (Bashlachev, Viktor Tsoi, Mike Naumenko, Kuryokhin, Andrei "Svin" Panov), or — if salable on the international market — living abroad (Grigory Bruksin, Kabakov, Andrei Roiter); there had been a paradigm shift. I'll explain this shift very briefly: in the U.S.S.R., cultural life was led in conditions of (a) all-encompassing censorship, (b) isolation from the ideologically unclean "outside world", (c) the complete absence of a market.

For all its obvious costs, this system gave talented guys a range of secret weapons: a devil-may-care dissident spirit, a distinctive identity, a complete lack of mercenary intent. You could become the idol of millions without going on television even once; you could create a smash hit while still working stoking a boiler or cleaning the streets; you could experiment without sparing a thought for sales. Perestroika brought an end to censorship and lifted the Iron Curtain a touch, something that had already changed the creative modus operandi and which, in the 90s, led to the introduction of the long-awaited market.

Money, which up till then had, strictly speaking, meant nothing, now meant everything. And the high priests of this cult of cash were the engineers of the 90s: the gangsters and the "New Russians." Both groups were mobsters, really — the latter were just a touch more humane and refined: instead of Adidas trainers and raspberry-red jackets they wore black Calvin Klein jeans. Russia suddenly switched from a position of "everything is forbidden" to "nothing is off-limits": one-sixth of the world's surface found itself in a state of actual anarchy. The government reacted only to the day-to-day political agenda, and all the rest was just left to its own devices, with the mantra being "grab as much as you can."

In theory, this all sounds fantastic: freedom, a fresh start, "unlimited impossibilities," as one fortune-seeking expat I knew used to say. In practice, however, it all came out a bit twisted. Those survivors of the 80s underground still living in the country (and I was one of them) were busy trying to capitalize on the heroic past; the phrase "If you're so smart/talented, then how come you're so poor?" served as an irrefutable psychological imperative. And the first thing that the new generation of anti-Soviet youth did, once they'd been given carte blanche, was to pile on the pleasure.

And, as often happens, and especially in Russia, everything that could be cheapened and ruined was cheapened and ruined. A classic example of this was raves and "club culture." I was involved with some of the first dance events in Moscow, in the winter of 1991/spring of 1992 (Gagarin Party, Technoir) put on by some beautiful techno-freaks from St. Petersburg, headed by Ivan Salmaksov. They were an astounding success and so, the very next moment, the rave movement was co-opted by the criminal Komsomol: They quite simply murdered Salmaksov, and these fashionable neo-futurist parties were instantly reborn as drug-fuelled gangster orgies. Or take "showbusiness": the first attempts at making quality pop music (Natalya Vetlitskaya, Alyona Sviridova, Anzhelika Varum) packaged in stylish videos, fell prey to cunning "producers," and as a result a fairly horrific genre of music known as popsa appeared everywhere. The only alternatives were boring "sh--rock" (govnorok) and, Lord have mercy, "Russian chanson" — torment on the airwaves. … It's the same story with cinema, design and cultural media — everything was mixed together in a big friendly stew of glamour, cocaine, loose women and criminality. 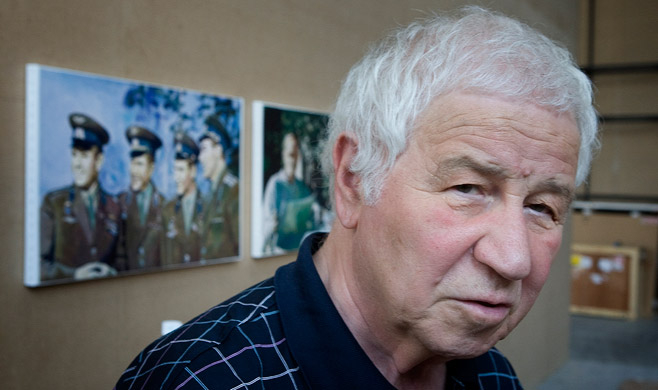 Works by Ilya Kabakov represented the chaos of the late 1980s U.S.S.R.

I am not, in principle, a self-righteous person and I've got nothing against a cocktail of this sort: let's not forget the Silver Age, another time when things were far from decorous. The problem here is different, however: the decadent free-for-all of Russia at the end of the 20th century, unlike that now century-old cultural revolution, left behind very little that is genuinely talented or properly artistically and intellectually convincing. And there is practically nothing from that time that went on to have any serious resonance outside Russia. One exception might be literature (Viktor Pelevin, Vladimir Sorokin) or, in part, visual art (Vinogradov-Dubossarsky, Oleg Kulik, Boris Mikhailov) — those areas of culture that were largely left untouched by the cash-rich party frenzy of the 90s. All of us, of course, can also recall something else worthwhile from that time: my own favorites include the films of Maxim Pezhemsky and Yufit, the performance art of Vladik Monroe and Pirate TV, the charming holy madness of Vladimir Shinkarev and Dmitry Shagin from Mitki, the art-rock songs of N.O.M. and the rapping of Delfin, the electronic experimentation of Roman Belavkin and the New Composers, the photography of Igor Mukhin … I've probably missed some things out.

The culture crowd of the 90s didn't form any clearly articulated movements or styles; here, as with the gangsters, it was every man for himself, you against the world. Nevertheless, in my opinion this 90s culture — be it mass or "elite," and in both commercial and its artistic hypostases, exhibited certain typical shared characteristics which allow us to define it as a particular phenomenon.

First, the tendency to be flagrantly apolitical. It's surprising, but true: The extraordinarily dramatic social cataclysms of that period — the reforms and the mass impoverishment of the population at the beginning of the decade; a popular uprising in Moscow, with the storming of the Ostankino television station and the bombardment of the parliament building; the war in Chechnya (!!); the economic crisis and default of 1998 — all that had practically no impact on the cultural production of the time! Supposedly relevant art existed in a parallel dimension from real life. I won't even get into the question of whether this was a thought-through, demonstrative reaction to the engaged art of the 80s or just a genuine case of couldn't-give-a-shit-itism motivated by those standard 90s stimulants — money and charlie.

Second, the absolute focus on the media. Unlike the underground of the 80s, which didn't have access to the professional press and so created its own homemade, but effective, way of being (samizdat, apartment gigs, word of mouth and other DIY endeavors), in the 90s everything was honed for mass media. If you weren't in the trendy magazines (Ptyuch, OM) or on the fashionable television shows (Dryoma, Cafe Oblomov), then you basically didn't exist. Lots of interesting musicians of that period — from the crazy art-punk group Chimera to the psycho-bard Venya Drkin — never really took off and were left to rot largely because they didn't fit the infamous "radio format"… Whereas a ton of glammed-up hacks got all the glory.

The third tendency was parochialism. Here the main ingredient was, of course, wall-to-wall derivative borrowings (with a certain time-lag) from trends in western mass culture. Here you go, Russian Brit Pop, the Russian Tarantino, the Russian "Generation X." The work of those few who made some effort at a unique national identity (Mitki, for instance) harked back exclusively to the stereotypes of the past — things that could evoke feelings of warm nostalgia among their fellow countrymen (especially in the context of the New Russian free-for-all) — but it left no impression on the outside world. Russia, its doors flung open to the world, could not offer it any new Malevichs, Stravinskys or Eisensteins.

In summing up, I'll risk a paradoxical conclusion: The most important product of the culture of the 90s in Russia, and the only one that deserves any attention, is the Russian 90s themselves — a decade that was, undoubtedly, "crazy" and completely unrepeatable in its disparate unfettered energy. … The artifacts of that era will be (in fact already have been) wiped from our memory, like a line of cocaine in the club toilets at Manhattan Express — which has itself already been swept away, along with the Hotel Rossiya. All that will remain are vague memories of raspberry-red jackets, shootouts in nightclubs and Mumiy Troll's 1997 song "Run Away!" And, of course, Boris Yeltsin, the era's appropriately drunken conductor.

Artemy Troitsky is a journalist and teacher in Tallinn, Estonia. The views and opinions expressed in opinion pieces do not necessarily reflect the position of The Moscow Times.  @aktroitsky

Artemy Troitsky is a journalist and teacher in Tallinn, Estonia. The views and opinions expressed in opinion pieces do not necessarily reflect the position of The Moscow Times.  @aktroitsky