Russian culture — by which I mean the world of the arts — is locked in a battle, the likes of which have not been seen here for decades.

Many know events in Novosibirsk where a director, a theater manager and a production of Richard Wagner's "Tannhauser" fell victim to attacks from the state and church. But "Tannhauser" is the tip of the iceberg.

New confrontations affect theaters and artists almost daily. In Moscow the Open Stage project was taken over by a managing director who canceled all projects preceding his appointment, wiping out years of work. In Pskov a theater troupe recently attempted to close a show before it opened, denouncing director Varvara Faer to Russian Culture Minister Vladimir Medinsky.

The disgruntled actors claimed that Faer's "The Banya Master," based on interviews done with locals, offended them with obscenity, nudity and an irreverent view of their city.

Anatoly Ledukhovsky's "Griboyedov-Blues" at Moscow's Home Theater at the Shchepkin House has nothing and everything to do with this trend.

The fact is that even ancient history, like Russia in the 1820s when Alexander Griboyedov wrote his great comedy "Woe From Wit," has ways of resonating clearly with the present.

Griboyedov is an icon of independence and opposition in Russia. His play was banned until 30 years after his death, in part for cascades of pithy phrases satirizing power, stupidity and that human penchant for groveling. It struck too close to home for those with reputations to defend, and they attempted to bury it.

Ledukhovsky's clever show, rather like one created two years ago by Georg Genoux and Nikolai Berman based on the writings of the banned 19th-century philosopher Pyotr Chaadayev, is an indication that the conflicts surrounding us now have roots and precedents in the distant past.

In the case of "Griboyedov Blues," the connection is made cleverly. Ledukhovsky imagines a modern television talk show whose special guest is Alexander Chatsky, the great-great-great-grandson of the leading character in "Woe From Wit," who has flown into Moscow from his home in the United States especially for the broadcast. 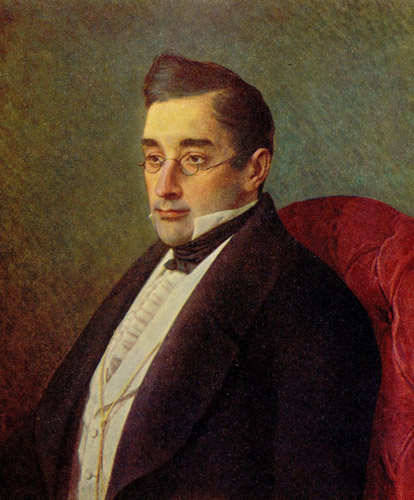 This Chatsky, played by Yulia Bogdanovich in a classic black suit that would look as sharp in the 19th century as it does in the 21st, is more than the host can handle. He is rude, aggressive, caustic and loose-mannered in a kind of American way, as well as witty and acerbic a la Russe. He spouts lines that his literary character-ancestor speaks in Griboyedov's play, repeatedly confounding the toy-doll host who is so cheery and intent on digging up news, if not dirt, that she rarely sees the zingers flying past her.

Bogdanovich invests Chatsky with an abundance of bitterness and sarcasm. Hiding behind impenetrable dark glasses, slouched rudely in his chair, and spitting invectives drawn from the canonic text of "Woe From Wit," this Chatsky unleashes withering attacks on ignorance and banality.

All of this takes place amid one of those mindless gimmicks whereby spectators are asked to call in and vote for the greatest name in Russian history. Is it Peter the Great? Pushkin? Stalin? Griboyedov?

Naturally, the phone system and voting mechanism break down, constantly forcing the talk-show host Sofya Pavlovna to improvise, which she does to fine comic effect.

Olesya Mozdir's Sofya Pavlovna is a hoot. Bubbly, energetic, quick-tongued but more often slow of mind, she is one of those train wrecks we love to watch happen. She seems not to notice that Chatsky, unleashing a death rattle from time to time, may be a vampire, a devil, or just plain dead. Her job is to entertain and she does that, come hell or high water.

Perhaps too late, the performance takes another detour in an obscure, prolonged epilogue that in a pseudo blues-tinged environment, sees all three characters continue their debate about Russia and its mission.

As spot-on as some of the text was here, it added little that the main part of the show had not already accomplished.

At its best, however, "Griboyedov Blues" unleashes a powerful punch at the state of public discourse in Russia today.