Realism (Реализм) is one of the most impressive, and at the same time most difficult, styles of tattoo to perform. Realism tattoos might be the best choice for those who want to have a portrait done on their body or want a tattoo that looks more like a photo than a drawing.

Old School (Олд скул) is a traditional style of tattoo that originated in the United States and Europe at the end of the 19th century. The style is characterized by bright colors and heavy outlines. Old school tattoos were very common among sailors, which is why anchors and other naval symbols are among the most popular old school designs.

Dotwork (Дотворк) is a unique style that has its roots in Africa, India and Tibet. Dotwork tattoos are traditionally drawn in black or red and are created by using dots. The style should definitely be considered by those willing to ink geometric patterns or mandala tattoos.

Japanese Style (Японский стиль) tattoos will be appreciated by fans of oriental culture. The examples of the most common designs include dragons, carp, warriors and geishas. All the images have deep meaning, which is what makes the Japanese style especially popular among tattoo lovers.

Although getting a tattoo may not be the first thing that comes to mind when considering souvenirs to take home from Russia, body art is becoming increasingly popular in Moscow. Numerous tattoo parlors line the popular pedestrian Ulitsa Arbat, but for real tattoo connoisseurs the Russian capital offers a wide variety of options for tattooing, ranging from large studios with multiple artists to private home-based tattooists.

Angel is one of the oldest tattoo studios in Moscow and is the best choice for those interested in getting a tattoo in a classic, old-school tattoo style. Located close to the Dynamo metro station, Angel offers a huge range of designs, and the studio's helpful staff can help first-timers work out the design that will best fulfill their expectations. The founder of the studio, Pavel Arefyev, known as Angel Pavel, is one of Moscow's most famous tattoo artists and an organizer of the International Moscow Tattoo Convention. Prices for tattoos at Angel start at 6,000 rubles ($106) and go up to 12,000 rubles ($212) for a three-hour session with Angel Pavel himself.

A little further up the green line of the Moscow metro, near the Voikovskaya station, is XK Tattoo studio. Owner Dmitry Rechnoi began his professional career in 1993 and has steadily built a serious reputation among Russian tattoo fans. Be prepared to wait more than six months for an appointment with Dmitry, although some of XK's other artists would be happy to ink you sooner.

For those looking for less traditional styles, the Faux Pas studio at the Winzavod contemporary art center is the place to go. Founded in 2009, the studio is known for "literary" tattoos of quotes by famous writers and has its own art gallery.

The Love Life Tattoo studio at Chistiye Prudy prides itself on its openness to global tattoo trends. Its five skilled tattooists can draw styles from classic to neotraditional to Japanese. With designs starting at 4,000 rubles ($76), Love Life is also considered one of the more reasonably priced places in Moscow to get inked. 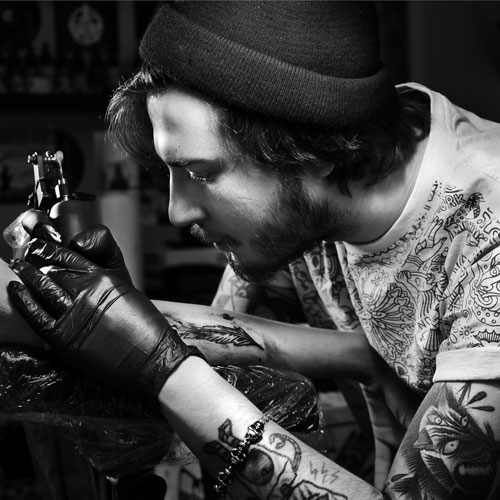 A tattoo artist working on a client at the Love Life studio in central Moscow.

These and many other options can be found at the Tattoo-Moscow.ru website, which features a huge listing of Moscow tattooists along with examples of their work and contact details.

Although it's not at all uncommon to see tattoos in Moscow, tattooing remains a bit of a social taboo in Russia as a whole. An August 2014 survey by the independent Levada Center polling agency showed that 78 percent of Russians view tattoos mostly or very negatively, and only 6 percent of Russians have tattoos. For comparison, a fifth of all adults in Britain have been inked, according to The Guardian newspaper, while an NBC report last year revealed that 40 percent of Americans live with someone who has a tattoo.