It took one single spectator at the 21st running of the Golden Mask Festival awards ceremony on Saturday to say aloud what was on the minds of many.

With the evening nearing its end, Russian Culture Minister Vladimir Medinsky joined actress Darya Moroz to honor theater benefactors. But as he launched into a spiel of rote, bureaucratic praise, a strident young voice rang out like a shot from a balcony.

The response was electric. Real life had interrupted a routine exercise.

The audience of 1,100 actors, directors, producers, journalists and theater fans burst into a thunderous ovation that, at one point, seemed like it might never end.

The notorious battles over this season's controversial production of "Tannhäuser" at the Novosibirsk Opera and Ballet Theater — concluding in March with Medinsky's firing of the theater's managing director and the closing of the show by replacement management — have come to symbolize what many consider a state-sponsored war on culture.

Depression and frustration in the theater community have become the norm. And here, unexpectedly, was an opportunity to respond. The gathering of the theater elite, which had already heard Golden Mask managing director Maria Revyakina call for "theater without pogroms" in her opening remarks, let Medinsky know in no uncertain terms what they thought of the current state of affairs. 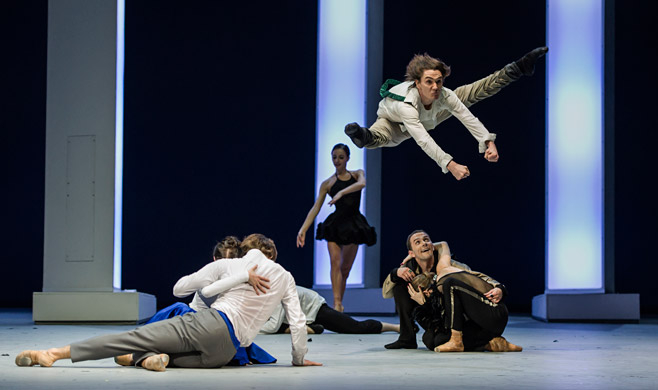 The minister stood stoically throughout the undulating, almost aggressive applause, waiting for it to wane. When it did he quipped, "I've always hoped that the appearance of the culture minister would evoke an ovation in a hall."

This declaration was greeted with a polite ripple of applause.

But, be that as it may, the business of the ceremony held in the beautiful large hall of the Stanislavsky and Nemirovich-Danchenko Musical Theater was to celebrate outstanding achievements in Russian theater for the 2013-14 season.

As usual, surprises were mixed in among predictable results.

The night's biggest winner was Henry Purcell's opera "The Indian Queen," directed by Peter Sellars for the Perm Theater of Opera and Ballet. It pulled down five distinctive glass and ceramic plaques depicting a red winged mask on a white face — best director for Sellars, best conductor for Teodor Currentzis, best female singer for Nadezhda Kucher, best opera and the critics prize.

Long before Medinsky's interrupted speech, Currentzis offered up the first of the evening's veiled political comments.

Accepting the award for Peter Sellars, he praised the American director as an "amazing person and artist," and, hinting at deteriorating relations between Russia and the West, added it was "very valuable that he received this award in our difficult times."

In all, Perm put in a strong, third-place showing in the battle among cities. The same city's Theater-Theater grabbed three awards for its musical "Eight Women": Irena Belousova for costume design, Viktor Shilkrot for set design and a special jury prize for ensemble work. 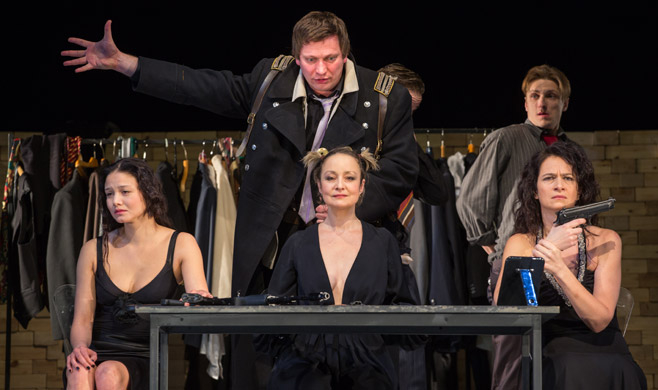 Yury Butusov won the drama director’s award at the ceremony for his production of Chekhov’s “Three Sisters” at St. Petersburg’s Lensovet Theater.

Moscow took the most awards with 15. St. Petersburg followed with 12, Perm with eight, Yekaterinburg with two, and Voronezh and Novosibirsk with one each.

Other big winners among individual works — each with three — were the St. Petersburg Theater of Musical Comedy's "Chaplin," the Bolshoi Theater's ballet "Taming of the Shrew" and the puppet show "When I Grow Little Again," a joint production of St. Petersburg's Bolshoi Drama Theater and Moscow's KultProyekt.

"Chaplin" was honored as best musical, while its performers Maria Lagatskaya-Simina and Yevgeny Zaitsev were named best singers in the female and male categories.

"The Taming of the Shrew" was tapped as best ballet, with performers Yekaterina Krysanova and Vladislav Lantratov taking best female and male dancer awards.

"When I Grow Little Again" was one of the top winners in terms of percentage, taking three of four possible awards in the field of puppetry. Taras Bibich was named best actor, Emil Kapelyush and Natalya Mishina were named best designers and Yevgeny Ibragimov was proclaimed best director.

Moscow's Ten, or Shadow, Theater won best puppet production for their intimate "Cook-Art" project, which gives audiences of about 30 people a choice of which five Shakespeare plays they wish to see performed in five-to-10-minute versions. 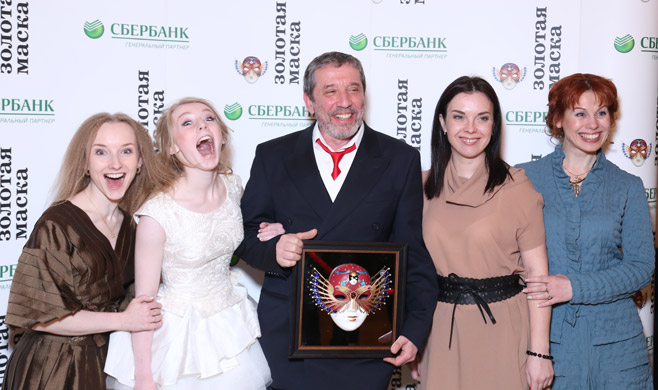 The award ceremony took place at the Stanislavsky and Nemirovich-Danchenko Musical Theater. Above, the team behind “Eight Women” from Perm's Theater-Theater celebrate their awards.

Alluding to, but not specifically mentioning, conversations that Russian theater bureaucrats will begin giving preference to theaters and shows based on box office numbers, Krasnopolskaya thanked the Golden Mask for recognizing that quality, not quantity, is still a viable artistic commodity.

In the field of drama, only one production pulled down multiple awards. For their work on "Alisa" for St. Petersburg's Bolshoi Drama Theater, Maria Tregubova was named best set designer and Gennady Bogachyov was tapped best actor in a supporting role.

Moscow's Praktika Theater received two awards for two different productions: "Pyotr and Fevronia of Murom" was named best experiment, and Yevgenia Panfilova was honored for best costume design in a drama for "Cinderella."

St. Petersburg's Maly Drama Theater, a perennial winner, was honored with best large-scale production for Lev Dodin's innovative staging of Anton Chekhov's "The Cherry Orchard" in and among the spectators.

Yury Butusov won his second award for best direction in as many years for his powerful work on Chekhov's "Three Sisters" for the Lensovet Theater of St. Petersburg.

The best actor awards were among the most popular of the evening.

In a highly unexpected but crowd-pleasing upset, the relative newcomer Ksenia Orlova beat out a large field of well-known competitors for best actress for her work in the experimental single-performer production "Retribution-12" at the Playwright and Director Center.

Orlova seemed overwhelmed as she took possession of her plaque. She whispered, "Thank you!" and ran off the stage.

Accepting his award for best male performer as Fyodor Karamazov in "The Karamazovs" at the Moscow Art Theater, Igor Mirkurbanov made it a point to congratulate and praise the 10 other nominees he beat out.

"Every one of the actors here is deserving of a Golden Mask," he said to warm applause.

Despite this genuine and welcome call to professional unity, the undertow of dissent repeatedly reared its head, if only sporadically, throughout the evening. 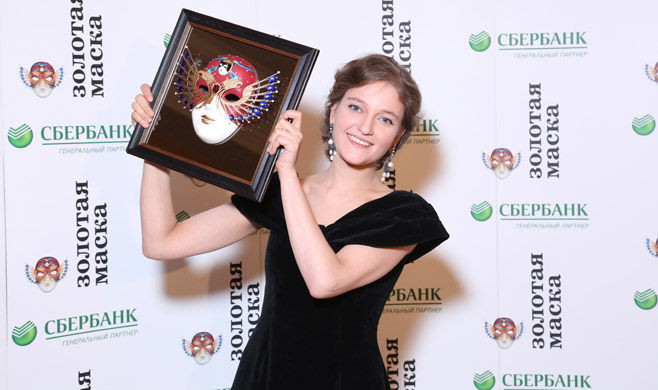 Ksenia Orlova took the best actress for her work in "Retribution-12" at the Playwright and Director Center.

Swiss-born, St. Petersburg-based Giuliano di Capua, accepting the award for best small-scale dramatic production for his "A Life for the Tsar" at the Teatro Di Capua in St. Petersburg, said, "This is a show about civil responsibility and I wish Russia one and the other."

Director Mikhail Bychkov, accepting a jury prize for "City Day" at the Kamerny Theater of Voronezh, thanked the Golden Mask for "maintaining a correct orientation in difficult times."

Thalheimer, speaking in German through a translator, received a strong ovation for stating in his comments that "freedom is the basic foundation of theater."

Medinsky was nowhere to be seen by the time these speeches were made.