Multidisciplinary artist and experimental music composer Mark Fell, one half of seminal glitch and minimal electronics duo snd, has been making music that is intriguing and challenging, though not what one would immediately describe as "danceable," for nearly 20 years now. He plays Moscow at Dewar's Powerhouse.

He will be presenting "Sensate Focus," a music project inspired by sex therapy, in Moscow on Friday at a gig organized by the British Council, and will be supported by local electronic composers OL, ComputerGraphics, phalf and Saburov.

"In many ways both my solo work and the Sensate Focus project follow on from snd and aim to develop some of the themes, processes and materials that I worked on with snd. So its a progression from that," Fell said in an e-mail interview with The Moscow Times.

The project's name is taken from a sex therapy practice that emphasizes touch, as opposed to a focus on penetrative sex and reaching climax — the journey, and not the destination. "This for me correlates with structures found in house and techno musics, which have a function or purpose," Fell explained. 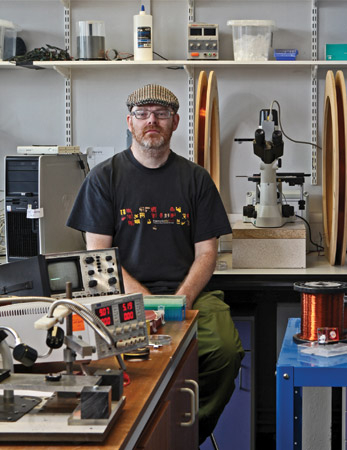 Fell and collaborator Matt Steel agreed not to nod to music when they DJ.

Unlike Fell's other music, Sensate Focus was not composed from mathematical models and algorithmic systems, and was written entirely using the "pencil" tool in the audio MIDI editing environment he uses. The result is rhythmic structures that more closely resemble house or techno, with large "song-level" structures, Fell explains.

"When I started making electronic music in the mid-1980s, it was very difficult just to make things. I could only afford one synthesizer at a time and just to get things synchronized was a large challenge," Fell said. "Computer-based systems gave me the chance to explore procedures not possible in commercial hardware units at the time. So that was a very big step for me."

Coming of age in northern British city Sheffield in the 1980s, his home's industrial legacy, post-punk music and synth pop scenes played a big role in Fell's formative years. "For me, it all started with a rejection of the slightly earlier punk rock movement and the aggressive and violent behaviors it glamorized. I was also very unhappy with the use of fascist, specifically Nazi, symbolism. Both my parents lived through World War II and coming from industrial regions had witnessed first hand the destruction caused by European fascism."

"Also, at the time, the region I grew up in was experiencing very difficult economic circumstances and there were a number of ongoing strikes within the mining and steel working communities. This led me to become very dissatisfied with mainstream culture and politics and I started to become active in political demonstrations, read literature and make electronic music. For me it was about establishing alternatives."

Visually trained, music is only one part of Fell's work, which also includes sound art, audio-visual work and site-specific installations involving multiple speaker systems. He has even collaborated with a neuroscientist to turn random Brownian motion into music.

"Most of my rhythmic music is an attempt to think about house and techno of a certain period, and to establish a radical approach that is not simply borrowing from other forms of experimental music such as the electro acoustic tradition." he said, "My sound installations often critically respond to that tradition in terms of beliefs about space, time, representation, expression and so on."

"Most of the time I aim to confront and challenge audiences, but not because I feel some sense of antagonism towards them, but more because I hope they share a sense of curiosity, and the enjoyment of being presented with unusual materials, structures and so on. I think this is common to my music and installation practices."

hot off the press

A powerful retelling of the Biblical return of the prodigal son.
racing history

Russian Racer Is a First at Irish Cookstown 100