Just over 11 years ago, the team of Moldovan choreographer Radu Poklitaru and British drama director Declan Donnellan caused something of a sensation at the Bolshoi Theater, shaking up the theater's classically oriented dance troupe and repertoire with an impassioned contemporary reworking of Sergei Prokofiev's ballet "Romeo and Juliet."

The ballet proved a huge success with Moscow audiences and critics, but enjoyed a relatively short life in the Bolshoi's repertoire, due to the Prokofiev estate's withdrawal of performance rights to the score, ostensibly because of the cuts in it made by Poklitaru and Donnellan. An even more important reason, however, may have been word reaching the estate that Poklitaru planned to stage Prokofiev's ballet "Cinderella" in Riga with its heroine portrayed as a maid in a brothel.

Last month, Poklitaru and Donnellan returned to the Bolshoi with yet another dance version of a Shakespeare tragedy, this time "Hamlet." The result, I regret to say, came nowhere close to duplicating what they achieved with "Romeo and Juliet."

Both choreographer and director made it clear before the premiere that the choice of "Hamlet" was not theirs, but that of Bolshoi ballet artistic director Sergei Filin. "I would certainly have picked some other play of Shakespeare's," said Poklitaru in a conversation during final stages of rehearsal.

Seeing "Hamlet" at both a dress rehearsal and a regular performance, it seemed to me that what went wrong lay principally in the nature of the play itself and the music chosen to accompany its action.

"Romeo and Juliet" had the advantage both of a score written specifically for it and a story that could be told perhaps as well with dance as with words. "Our 'Hamlet' is going to be very emotional," said Poklitaru. All well and good, I thought, but though that approach worked brilliantly in the case of "Romeo and Juliet," I had my doubts it could succeed with "Hamlet," where so much depends upon perceiving the principal character's innermost thoughts, as expressed in his great soliloquies.

Several years before he defected to the West in 1974, Kirov (now Mariinsky) Theater star dancer Mikhail Baryshnikov was offered the title role in an upcoming ballet setting of "Hamlet." He flatly turned it down, saying, "I don't want to stand there for a half an hour in a pose meant to express 'To be or not to be.'" 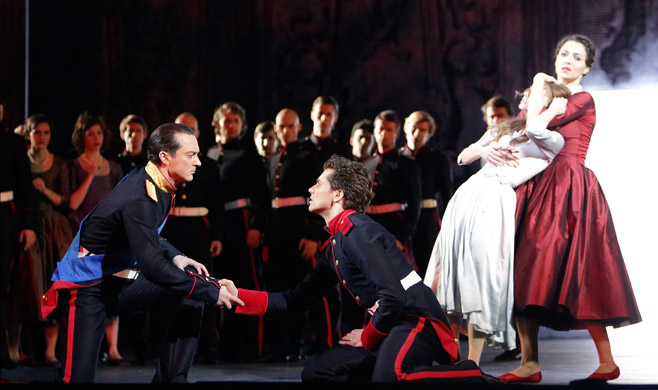 The music of Shostakovich is used for the ballet "Hamlet" to mixed results.

Poklitaru and Donnellan have pretty much dispensed with any reference to the soliloquies. Instead, their Hamlet seems little given to reflection, spending much of his time bounding about the stage in fits of anger and frustration.

The ballet as a whole contains at least as much pantomime as it does what might reasonably be called dance. Many of the dance movements seem to come straight from "Romeo and Juliet" or from the ballets Poklitaru has since presented in Moscow with Kiev Modern Ballet, the company he has led for the past nine years. The rest show very little in the way of choreographic invention.

The pantomime, for the most part, is quite skillfully constructed, though some of the steps — you might call them either dance or pantomime — might well have come straight out of the Monty Python "Ministry of Silly Walks."

All in all, the ballet looked to me, especially at the second performance, when I was seated directly facing the stage, very much like a gigantic animated cartoon.

This is not to say that there aren't some fine moments in the production, among them Hamlet's encounters with the ghost of his father, his fencing match with Laertes and the bloody final scene in which Gertrude, Laertes, Claudius and Hamlet all eventually lie dead on the stage.

For music, Poklitaru and Donnellan chose Dmitry Shostakovich's fifth and 15th symphonies. Over the past 80 years or so, choreographers have fairly often turned to large-scale symphonic works as music for dance. It is one thing, however, to use music of that kind for an abstract ballet, as has mostly been the case, and quite another to attempt fitting to it the action of a story ballet.

In the case of "Hamlet," the music sometimes proves a surprisingly good fit. But at many points, it seems quite clear that choreographer and director were forced, with often questionable results, to attune the action to the vagaries of Shostakovich's scores.

The cast I saw on both occasions, headed by Denis Savin — the opening night Romeo of 11 years ago — as Hamlet, and Anastasia Stashkevich as Ophelia, performed superbly throughout, as did the Bolshoi's orchestra, under the sensitive baton of contemporary music specialist Igor Dronov.