"I usually don't write about books," Nilo Cruz told a group of people gathered to hear a discussion about his play "Anna in the Tropics," which includes quotes from, and references to, Leo Tolstoy's "Anna Karenina." "But when I began reading the novel from the point of view of my characters, I was making notes everywhere on all the pages. Because my characters were reacting immediately and passionately."

Cruz, who was born in Cuba in 1960 but moved with his family to the United States at the age of 10, is in Moscow to attend the premiere of his most famous play, the winner of the Pulitzer Prize for drama in 2003. It is his first trip to Russia, but is by no means his first encounter with Russian culture. 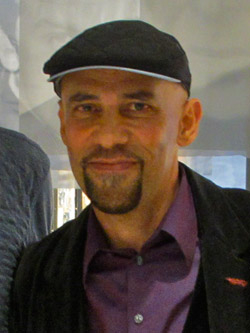 "I haven't used any other Russian themes in my plays," Cruz explained, "but Anton Chekhov is probably my favorite dramatist. The longing and nostalgia of his characters are close to mine."

"Anna in the Tropics" observes the employees and owners of a cigar factory in Tampa, Florida, in the late 1920s. They continue to use the old-fashioned hand-rolled method of cigar making, although they don't realize their time is short. Changes in personal habits and manufacturing will wipe out the cigar industry in Tampa in a few years' time.

For now, however, all of these women and men, immigrants from Cuba, continue to live as if little will ever change.

One age-old tradition they honor is that of the lector, a man who reads novels to the workers as they toil all day long. It entertains them and enriches their lives. When the new lector chooses to read "Anna Karenina," the passions and complications of Tolstoy's characters begin to intertwine with those of the people who listen to the tale as they work.

"I felt like this book had to be a force of nature that came to this part of the world and changed everyone's lives," Cruz said about his choice of introducing the novel to Cuban workers in Florida. "Tolstoy is a universal writer, a writer of great humanity. So I knew his novel would be interesting to spectators as well as to the characters."

Director Alexander Ogaryov, who will open another production of "Anna in the Tropics" at the Tomsk Drama Theater in April, took a different approach when explaining what attracted him.

"I never liked Tolstoy very much," he declared. "I always thought Tolstoy and 'Anna Karenina' were very long, boring and preachy. But when I read this play it was as if I became Anna. I very much liked the simple thought that literature makes us all better. I fell in love with the play and its author."

Discussing the difficulty of translating into Russian a play that includes segments of a Russian classic that invades the characters' lives and thoughts, the play's translator Yevgeny Kazachkov said, "the fact that the characters speak poetically at times is not a matter of literature. It is their desire to be better than they are." 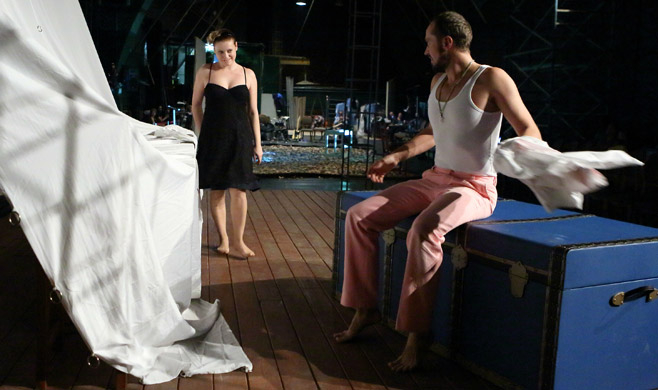 "Tolstoy is a universal writer, a writer of great humanity," said Nilo Cruz.

I pause briefly to declare a potential conflict of interest. Kazachkov translated "Anna in the Tropics" in a program I headed on the behalf of the U.S. Embassy in Moscow and the U.S.-based Center for International Theater Development. Doubt my impartiality as you will.

Following the opener on Monday, Cruz waited on the empty stage to greet the actors. As they appeared one by one, he went up to each and gave them hugs.

He stood for some time holding the hands of actress Lyudmila Lushina. She spoke to him in Russian, thanking him for writing his play and asking him to write more. He spoke to her in English, expressing admiration for her performance. No one translated, and it was clear from the expressions on their faces that no one needed to.

A few moments later the entire troupe took seats in the hall and Cruz addressed them through a translator. He told them it was the best production of his play he had seen.

"I am so inspired," he told the actors. "I will go back to the United States inspired to write again."