Sasha Raspopina for The Calvert Journal

Traditional Russian cuisine is not widely known outside of the country. What is usually served in Russian restaurants is a mix of the cuisines of ex-Soviet republics, the food most Russians grew up with, generously larded with mayonnaise and dill. But now authentic Russian cooking traditions that date back to before the 18th century are slowly infiltrating the young foodie scene in cities like Moscow and St. Petersburg.

If you ask Russians about true Russian food, some will hesitate and eventually name a few foods that only made their way into the national cuisine in the last century. Others may argue that tastes in food, like national identity itself, are constantly evolving, and therefore impossible to quantify. Ironically, it's the widespread turn toward street food from around the world — Thai noodles, Vietnamese baguettes, Scandinavian meatballs with gravy — that's also boosted the appeal of Russian food. In a country where indigenous food has never been particularly popular or fashionable, traditional dishes are now starting to appear at Moscow's exclusive restaurants and in the city's street food markets and cafes.

In comparison to Soviet-era cuisine, which is heavy on meat and dairy, traditional Russian cuisine offers a safe haven for vegetarians. Many dishes were created around the strictures of the Orthodox calendar for instance, which restricts the eating of meat during Lent. As a consequence there's an emphasis on fish — baked, boiled, sun dried or made into ukha (Russian chowder) — and on soups, stews and kasha, a general name for various prepared grains like buckwheat, wheat, semolina, barley and oats. Pickling is also popular, with dishes like sour cabbage, pickled and salted mushrooms, zucchini, cucumbers and garlic, reflecting a time before modern refrigeration. Herbs like bay leaves, dill and parsley are preferred over harsh spices.

Traditional cuisine has its champions, among them some of Moscow's leading chefs, restaurateurs and foodies. For the most part, what they proselytize is an updated version of old dishes. For example, Vladimir Mukhin, at Moscow's White Rabbit, serves Russian food with a contemporary twist, adding Parmesan, herbs and truffle oil to original dishes.

Alexei Zimin, founder of Moscow's Ragout cafe and editor of the foodie bible magazine Afisha Yeda, has employed hints of Russian traditional flavors to garnish French cuisine. And chef twins Ivan and Sergei Berezutsky have been pioneering an haute cuisine approach to Russian food for a while in the kitchens of different Moscow and St. Petersburg restaurants, before finally opening their own restaurant (appropriately called Twins) in Moscow in November 2014. Boris Akimov of LavkaLavka promotes both authentic Russian food and local seasonal farmer's produce. 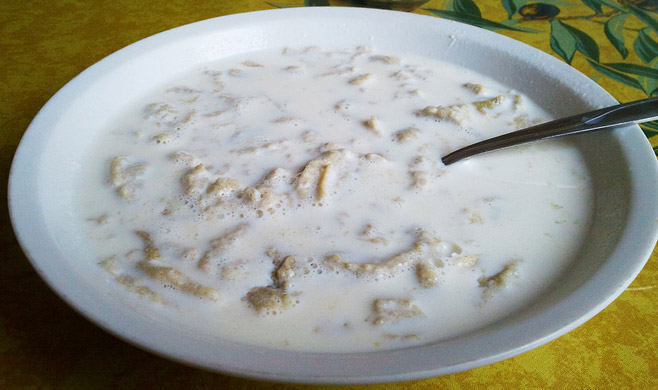 Traditional buckwheat kasha is a breakfast porridge beloved by many.

But there are also those that take a more uncompromising approach to questions of authenticity. Chief among this camp is chef Maxim Syrnikov, dubbed the "self-appointed guardian of authentic Russian fare" by The New Yorker. Syrnikov is on a mission to reacquaint Russians with their own food and root out the belief that their national cuisine is bland and greasy. He has published two books, has a blog, and is a brand chef at Dobryanka, a Novosibirsk-based "supermarket of ready meals" that sells authentic Russian dishes like rasstegai (little open pies usually filled with fish and served with soups), buckwheat pancakes and kvas (a fermented bread drink).

You can also increasingly find Russian food in hip cafes and in Moscow's street food markets. By Baykal, a stall at the capital's weekly City Food Market, sells slightly westernized, but still conceptually original, Siberian and Northern Russian recipes. They offer venison from Yamal (made into burgers with buffalo cheese), dishes with wild ­Siberian fish and berries from the taiga, and herb and berry teas made with water from Lake Baikal. Customers leave enthusiastic reviews on their Facebook page lauding their "real Russian food," over the hipster falafels, smoothies and waffles on sale in the rest of the market. Claims to a simple, true authenticity in the face of hipster superficiality dissipate somewhat when you consider the fact that making herbal tea fresh with the waters of Lake Baikal involves a 4,000 kilometer trip east of Moscow. Still, the initiative is at least going some way to introducing townsfolk to food that might otherwise remain invisible in the globalized city.

Despite the rising interest in traditional fare, there's perhaps little chance that Russians will immediately adopt it in their own kitchens. Authentic Russian cooking means adhering to laborious rules (slow braising as a main preparation method, for instance) and excludes a good deal of everyday ingredients such as tomatoes and potatoes. But with European Union sanctions on imported produce continuing to bite and a resurgent patriotism post-Ukraine crisis, pre-revolutionary food may be back on the menu for a while to come. Just remember: borshch is Ukrainian, not Russian, and potatoes only appeared in Russia in the 18th century.

This article first appeared in the online magazine The Calvert Journal, a guide to creative Russia.