Emmanuel Quidet, president of the French-Russian Chamber of Commerce and Industry and a partner at auditing firm Ernst & Young, has been working in Russia since 1994. Quidet is a firsthand witness of the colossal transformations Russia has undergone in the last two decades, a period he says has been marked by a "complete revolution."

"You had a country that had collapsed completely. You had no army, no police, no money, and the country has now completely recovered," Quidet said. "Russia was the smallest European country economically at the beginning of the 1990s, smaller than Portugal, and now has become one of the largest. It's absolutely incredible."

The Moscow Times sat down with Quidet to discuss Russia's current economic crisis, and how sanctions and political tensions have affected French business activities in Russia. 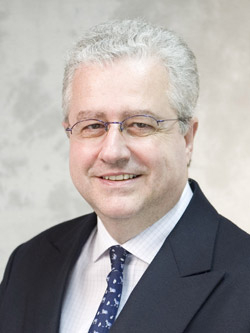 Q: Is there anything in the current French-Russian trade relations that could be considered exclusive, in comparison with Russia's trade with other European countries?

A: Exclusivity comes from what the French do the best — luxury. The luxury business is doing well in Russia. [Luxury consortium] LVMH is the No. 1 luxury group in the world and they are all over the place here in Russia. Of course, they are suffering as much as others from the devaluation of the ruble, but it depends on the segment.

Some areas are not really suffering, such as the perfume industry. It is doing well — the successful [perfumery and cosmetics retailer] Ile de Beaute brand belongs to LVMH. It's more difficult for garments, clothes and accessories, which are produced in Europe.

Then we have large food industry companies such as Danone. Russia is the No. 1 worldwide market for Danone, ahead of France. Same thing for the pharmaceutical industry: Sanofi is the No. 1 pharmaceutical company in Russia. Oil and gas provider Total is another very important company here. I should not forget the car industry with Renault, for which Russia is also the largest market in the world if you consider the Renault-Nissan Alliance with AvtoVAZ under full control.

There is also [hypermarket chain] Auchan. Auchan is one of the largest foreign employers in Russia with some 35,000 employees. [Home-improvement retailer] Leroy Merlin and [sporting goods chain] Decathlon also belong to the same group, so if you consider it altogether, that would make even more — about 50,000 employees.

French businesses are very strong in Russia. France is the No. 2 investor in Russia after Germany in terms of direct investments.

Q: How has the trade turnover been affected by the ongoing political tensions?

A: Globally, Russia's trade with the EU has decreased by 20 percent. Russia's trade with France has decreased by about 17 percent. It is very difficult to estimate these figures by sector. In some of them trade is even increasing, and in others it is significantly decreasing. Russia's ban on agricultural products has had a large impact on bilateral trade. Agricultural products that are not produced here can no longer be imported.

Q: Which sectors have suffered the most in France? Have any industries grown despite the sanctions?

A: The car industry has suffered a lot. The Russian market is the second [largest] European market for cars after Germany. Nevertheless, some industries manage to continue developing.

The pharmaceutical industry is doing fine. Luxury — apart from the problem of the ruble devaluation — is also doing fine. French food industry companies such as Danone and Bonduelle, which produce in Russia, are fine. Those who localized their production here are doing all right. It's when you are not producing here that it gets difficult.

The pharmaceutical industry has grown noticeably. It will keep on growing, despite the crisis and political situation, because there is a big need for its products in Russia.

Q: To what extent can Russia's trade with Europe be considered a factor in political decision-making in Moscow and in key European capitals?

A: I don't think there is the will, both in Europe and in Russia, to cut the links between us. The problem is that we are in a political game right now and the situation is getting tense. Russia needs Europe and Europe needs Russia. It goes both ways. Europe will not develop without Russia and Russia will not develop without Europe. Russia is a European country. We need each other. The EU's relationship with Russia is extremely important. It cannot just be destroyed.

Q: How strongly is the French government being lobbied for economic interests to prevail over politics?

But I must say the French government is very reasonable. It has been extremely fair in the way it addresses Russia. Russia has been targeted by lots of insults from some heads of states. Francois Hollande has never insulted [Russian President] Vladimir Putin. Of course, the French government understands that this is a serious political crisis, that it needs to take some steps, but they are doing it in a soft way.

A: You can replace French tomatoes, French vegetables or any ordinary product of this kind, but you cannot replace Camembert. I hope that French products will be back in their place once sanctions are lifted. The problem is that all the positions lost during this period of sanctions by our food companies might be difficult to recover. They might even be lost forever.

French farmers have been and still are continuously lobbying them. If you look at the global picture, the 400 million euros [$454 million] that farmers have lost doesn't seem very big. But on an individual basis, the situation has caused many tragedies. Some of the French producers were exporting 50 to 80 percent of their production to Russia.

Q: How long will it take for trade relations to be fully restored once the sanctions are lifted?

A: It's a question of political will and the impulse must be sent by the authorities. It can go very fast, or very slowly.

Q: Is there a way French companies can capitalize on the present economic downfall in Russia?

A: Companies that produce here can take advantage of the situation, of course. But those that do not produce in Russia can also take advantage of it by investing in Russia since it is now less expensive to invest than before. There are good deals to be made in Russia right now. The Germans have already started. The French should do it more quickly.

You have two types of people: those who know Russia and those who don't. The people who know Russia don't like the current political situation because it makes business conditions more difficult. At the same time, French businesses that are present in Russia will not leave, nor will the other European businesses.

It is difficult for companies that have never worked with Russia to come right now because they don't understand the country and the current situation. Paradoxically, it's a good opportunity to do business.

Q: Do you think Russia is open to small-sized foreign entrepreneurs or only to large multinationals?

A: There is a misunderstanding about this. About 1,200 French companies are working in Russia, including 37 classified as very large ones, from the French CAC40 list. This means there are lots of small- and medium-sized French enterprises in Russia.

Q: Have the workload and responsibilities of the French-Russian Chamber of Commerce and Industry changed significantly since the sanctions were imposed?

The swimmers hoped to draw attention to pollution of the world's largest freshwater lake.
'Union State'

From the late 1960s to the late 1980s, about 18,000 radioactive objects were dumped into Russia's remote northern waters.