American journalist Bryon MacWilliams traveled far and wide in Russia over the nearly twelve years he was a Moscow-based correspondent. Everywhere he went, he sought out the best steam in the local baths, or banyas. In fact, his new book — part memoir, part journalism, part travel writing — delivers Russia to readers through the lens of its bath culture, which MacWilliams calls "the most Russian thing there is." The following excerpt from With Light Steam: A Personal Journey through the Russian Baths is the beginning of the chapter that takes readers to a remote village in the republic of Chuvashiya.

We would be resting between steams, our hair wet, our skin flushed, our backs slumped against benches, our chests rising and falling with a slow, pleasant fatigue from swings in temperature, hot to cold to hot to cold.

Sometimes we would talk about what we were feeling, not emotions so much as the physical sensations common to our chosen bathhouse in Moscow. Was the steam dry enough, soft enough, light enough? Were our senses aroused more, say, by the aroma of beer with reassuring overtones of mustard, or that of wormwood with slashing accents of peppermint?

Sometimes, when the steam was just right, we would not talk at all. Great steam, like great art, has the power to bring on quiet.

Such moments, for me, were a rejuvenating confluence of communion. With myself. With others. With the divine. Every so often, though, these spells of good feeling would be broken by declarations from other bathers, always Russian, that what we were experiencing, in fact, was not special.

"The steam here is good. I won't dispute that, I won't. But you'll never know what steam truly is until you've steamed in a real Russian banya, till you've steamed black-style!"

Most of it was hearsay, I knew. More Russians have seen the yeti than have steamed in a black banya.

Black banyas are nearly extinct. They just barely exist. They are the truest link to the ancient Slavic steam baths of another millennium. 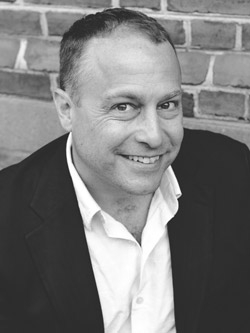 Black banyas are black because they do not have chimneys. Literally, they are black: the ceiling and interior walls are caked with soot, from smoke.

I have never appreciated being ripped out of a moment by someone telling me that there was a better moment, elsewhere to be had. Over time, though, the remarks of other bathers caused the vision in my mind of a dingy, soot-encrusted black banya to shimmer with the enchanting sheen of myth. Over time, I came to regard my appreciation for the Russian cult of steam a bit like Cicero regarded his history: "Not to know what happened before one was born is always to be a child."

Knowledge and awareness are not peers of experience; like the dismissive remarks of the other bathers, they are only so much hearsay.

I decided to find a black banya, and to steam in it.

I began my search by tracing my footsteps as a reporter. I had seen black banyas in Russia, but they were long dormant, relocated from villages to open-air museums of wooden architecture in the Far North (on the island of Kizhi, and at Malye Korely, on the hills outside Arkhangelsk). I probably had seen black banyas in far-flung villages, too, only I did not recognize them for what they were, because I was not sure what they were. These banyas without chimneys resemble dilapidated sheds, or huts. Their walls of logs or clapboard often slant, all but fall into themselves. Their roofs tend to be patched with whatever materials were at hand; sometimes the ceilings are merely sprinkled from above with soil, from which sprout grasses and wildflowers. Their floors of dirt, or rough-hewn planks, often are strewn with straw.

At best these banyas are prototypes of a simple peasant cottage with a low door, a small window, and two small rooms — one in which to steam, and another in which to wash.

I searched the Russian-language Internet, delved into databases of provincial newspapers and magazines. I posted messages to online banya forums. I simply asked around.

"It'll be difficult, it'll be difficult to find one," a Russian friend told me. He said he knew of an old black banya outside Moscow whose door was so small, so low to the ground, that one had to crawl through it, supplicant.

Too bad, he said, it had been torn down some months back.

"This kind of thing is happening all over Russia. These banyas should be put in museums before it's too late."

The banya about which he spoke might very well have outlived two empires: the Russian Empire, which was conquered by the Bolsheviks in 1917, and the Soviet empire, which effectively conquered itself in 1991. But the banya did not outlive the nascent years of the Russian Federation, in which steaming black-style is out of favor, museums barely have enough money for utilities, and cultural landmarks stand little chance against the will of those with a stake in the business of tearing down, and building up.

That is one of the ironies of this new, yet not-so-new country — for the terrain of daily life here is dotted with standing pools of longing, of nostalgia, for what once was, but is lost.

Deceased Soviet leaders. Transcendent Soviet artists and cultural icons. The innocence and certitude of childhoods lived behind the Iron Curtain. Achievements on the battlefield, and in outer space. Feelings of power and respect and relevance in the world. These pools of nostalgia are regenerative for a great many people who ache to feel good about themselves, and their country, after many years, when they did not. They symbolize the stability of a tradition, something Lewis Hyde, the American poet, says has "its roots not only in a historical or cultural past, but within the innermost being of man."

And therein lies the irony. Elements of culture that are essential to the country's sense of place, to its sense of self — indeed, to its very notion of a national soul — are disappearing with a nod to the few, and not the many.

Certainly it is happening with the black banya, the great granddaddy of the banya.

And the banya is the most Russian thing there is.

This is all for the best, according to another Russian friend. He can withstand the hottest temperatures in the steam room longer than anyone I have ever seen. More impressively, he can do so while slurring his speech, still buzzed from the previous night's party. "Don't believe everything they tell you about the black banya," he once told me, while sober. "A black banya simply is a bad banya, a poor banya."

His remarks speak to things like comfort, design, and safety. They do not speak to that which he cannot quantify: the essence of steam, its spirit.

For centuries Russian folklore has spoken of the bathhouse possessing a spirit. More to the point, the bathhouse is possessed by a spirit. For a bathhouse can look empty in Russia, but it never is. It is said to be home to the most powerful of the country's legion of domestic goblins, the aforementioned bannik. 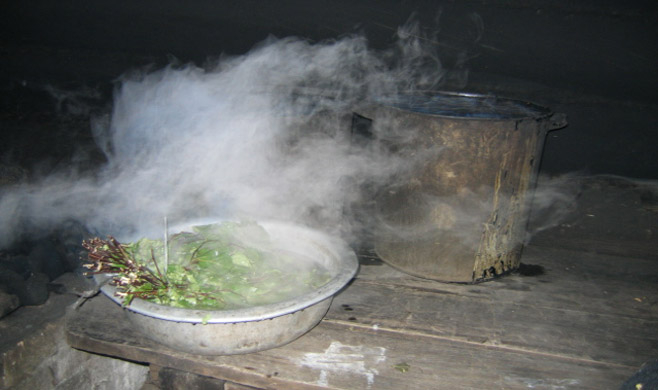 MacWilliams looks for a rare black banya in a remote village in Chuvashia.

Sometimes the bannik is not seen, but heard — in the rustle of leaves from a bundle of birch twigs, or as a voice in the dark, snoring, whistling, laughing, howling. The spirit is said to be felt, too — in the grope of a paw, the claws only just retracted, or that of a cold, hairy, heavily-knuckled hand down a bare spine.

The bannik (also baennik) is a pagan deity that was demonized after Russia adopted Christianity in the tenth century. In some regions it is said to be one of the rebellious angels driven out of heaven by Michael the Archangel. In others it is said to have been born of a fight between God and the Devil in a bathhouse.

In most of the tales passed down in the oral tradition of Russian storytelling, however, the disposition of the goblin of the bathhouse is not so absolute. Just as the banya is seen to straddle the natural and unnatural worlds, the loyalties of the bannik, too, are split.

"There are no evil banniks, but there are no kind ones, either," goes a proverb in the Far North.

There are other reputed haunts of evil forces in Russia — crossroads, thresholds, holes in the ice over a lake, or river. All of these places can "clearly be seen to be liminal areas at which a magical other world begins," writes Ryan in The Bathhouse at Midnight.

But none is transcendent like a village banya, at midnight.

"It is unclear: is [the banya] a building or, perhaps, a living thing? Or is it a secret abode, inhabited by creatures who reside in another dimension and only rarely show their faces to people?" writes Neonila A. Krinichna, a folklorist from the Far North.

No one talks of the bannik in big-city bathhouses, the places I usually steam. Its presence is more apt to be associated with bathhouses that accommodate a few, not dozens.

Perhaps that is inevitable in a megalopolis like Moscow, which Muscovites like to call "a country within a country." They are referring to the pace, to the disproportionate volumes of people, power, and money. The banya is important to life in the city, but it is not essential for living. (That is the case, anyway, for all but three weeks in spring, when the government denies hot water to residents while workers ostensibly perform maintenance on the Soviet-era water and sewerage systems.)

In fact, the scope with which urban bathhouses have strained from their roots can be seen at an elite banya complex where the city's lone black banya, of recent construction, is displayed like a rare animal at a zoo. It is not there for the merely curious, but for the well-heeled: it costs 6,000 rubles per hour, or $240, to use it.

But "Moscow is not Russia," as Muscovites are fond of saying. For this, I am grateful. If my friend is right, and a black banya is a poor banya, I will need to travel where people live poorly in order to find one. Perhaps only there I will find a history that is at once ancient, and alive.

— "With Light Steam: A Personal Journey through the Russian Baths" by Bryon MacWilliams  is available through major online retailers as well as the website of the publisher, Northern Illinois University Press. $24.95