Originally from Limerick, Ireland, Breslin, 28, moved to London as a child with her family. She graduated from the University of the West of England in 2012 with a master's degree in fine art and not long after decided to make Moscow her base.

The work on show is made up of pieces that Breslin has been working on in her well-lit, albeit not very spacious, apartment in Moscow, where she has been living for a year. The show is on at a plush pop-up gallery until Wednesday. Breslin hopes to go on to organize more exhibitions in Russia and internationally.

Breslin describes her work as "abstract portrayals of time and reality." One painting shows a couple sitting on a bed in front of a bright orange wall. A glass of red wine is on a royal blue carpeted floor. They are sitting side by side, staring stoically ahead.

Another painting shows a pair of legs, no torso above, standing on multicolored tiles by the side of a bright blue outdoor swimming pool.

Next to each painting is a note written on torn, lined paper. The legs by the pool are accompanied by the words, "I can't keep on saving you," and the painting of the couple is accompanied by a note that reads, "You ignored me all night / well you have ignored me for years / in any case I'm afraid of leaving you and you're afraid of leaving me so let's both remain stagnant and carry on making each other equally unhappy."

"I don't like interfering with people's interpretation normally, but this time I have put little notes of imagined speech by the side of each painting to give an idea of what the story behind the painting could be," Breslin said at the opening.

Certain paintings evoke feelings of exile and inadequacy, others are full of humor and mischief. One depicts a young couple, and the suggested narrative on the note says, "Katerina's and Sergei's relationship is successful because Sergei knows his place." 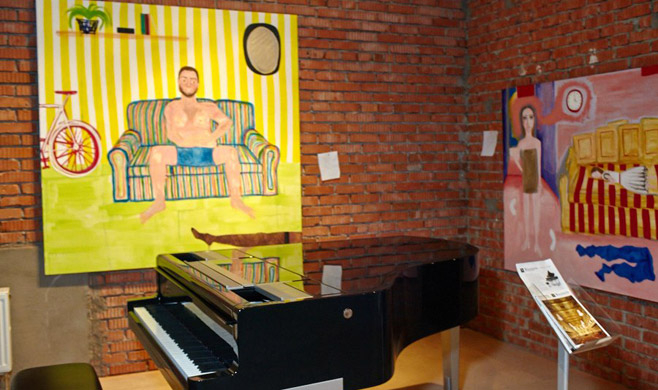 In the exhibition introduction, Breslin tells the viewers: "You're the most important person, forget me. I'm not actually here, I'm here in your reality … it's all about you."

"I think the paintings express what every person experiences. For example, the silent couple, everyone has seen that. We are all very similar at the end of the day," said Irina, who didn't give her last name but described herself as a beauty contest participant. "I see myself in the paintings, they are about what happens every day in contemporary society."

"They are funny, humorous in a David Shrigley kind of way," said another visitor, Isabel Hamilton-Douglas from the Stanislavsky Electrotheater, referring to the British visual artist. "I love the painting of the stripper and the nun sitting at dinner together."

The note accompanying the painting reads, "Equally uncomfortable — pass the salt," which is where the exhibit's title comes from.

The title is "playful, comical, ambiguous, a bit rude. I didn't want to over intellectualize it, I wanted something simple," Breslin said.

Breslin charmingly oscillates between harsh reality and absurd humor and in doing so invites us to explore the dynamic nature of human psychology. In the exhibition introduction, she tells us to be "enthralled, seduced and bemused" by the subject matter and by its fragility and uncertainty.