Pressure is building on Russia's Central Bank to support the ruble via a big rise in interest rates at this week's policy meeting, as money markets price in sharply higher funding costs in the coming months.

The bank, which so far has been powerless to stem the ruble's slide, meets on Thursday and analysts predict a 100 basis-point rise in the key lending rate, taking it to 10.5 percent.

Three-month forward rate agreements (FRAs), that allow traders to lock in existing market interest rates for six months, have jumped to 16.5 percent, up 1.5 percentage points from the end of last week and 400 bps higher than end-November levels, the following graphic shows: 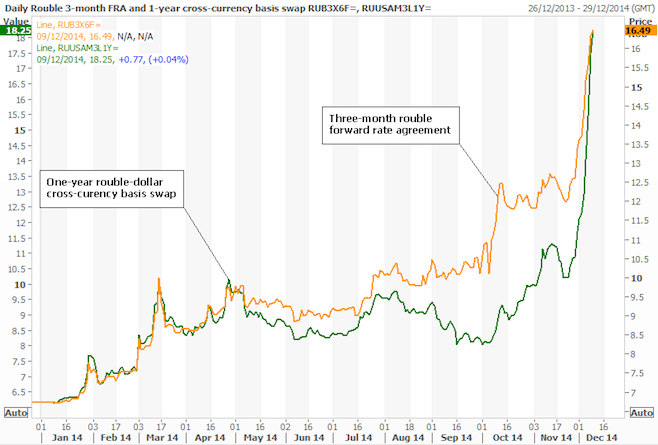 What that means is that ruble deposit rates starting three months from now and lasting six months will rise to 16.5 percent — seven percentage points above current official lending rates. Official rates have been raised by 400 bps already this year.

"There is intense market pressure on the Central Bank to hike rates this week and any shortfall will lead to significant volatility across Russian assets," said Bernd Berg, director for EM strategy at Societe Generale.

"You see significant panic in the rates markets. The Central Bank must come in and address the panic with a combination of higher rates and tighter liquidity."

Ruble/dollar cross-currency swaps show the cost of funding in rubles relative to that in dollars. A rise in one-year ruble/dollar basis swap reflects the scarcity of rubles in the system as a result of Central Bank action.

And Mosprime reference rates, based on contributions from leading Russian banks, show one-month deposit rates at 13.35 percent, up 150 bps over the past week.

"There's a change in strategy at the Central Bank, which is moving away from intervention to liquidity tightening similar to what Turkey deployed. To that extent it makes the main policy rate somewhat less important," UBS strategist Manik Narain said.

The picture is similar in Nigeria, where overnight rates have spiked after the Central Bank drained liquidity and raised interest rates.

Russia's Central Bank will raise its key lending rate by one percentage point later this week to try and halt the ruble's slide, most contributors to a...
news

The ruble strengthened sharply Friday amid what appeared to be multiple large interventions by the Central Bank a day after President Vladimir Putin called...
news

The ruble and Russian shares fell on Monday as the oil price tumbled to a five-year low and the Central Bank appeared to refrain from interventions in...
in the doldrums