French President Francois Hollande met with President Vladimir Putin during an impromptu visit to Moscow on Saturday, a rare display of goodwill as tensions remain high over the ongoing conflict in east Ukraine and France's decision to suspend the delivery of two warships to Moscow.

The French leader's unexpected stopover in Moscow, as he traveled from neighboring Kazakhstan back to Paris, makes him the only head of state from a major Western power to visit Russia since it annexed Ukraine's Crimea peninsula in March.

The visit — which in sharp contrast to protocol was held at a Moscow airport rather than at the gilded halls of the Kremlin or Putin's country residence — comes as Russia's economy heads toward recession for the first time in six years, and Moscow is more isolated than ever over its role in Ukraine.

The announcement Saturday morning that the two world leaders would meet came as a surprise amid tensions between Moscow and Paris. According to French newspaper Le Figaro, the meeting — which had long been pondered — was only confirmed on Friday night and was scheduled with the assistance of Kazakh President Nursultan Nazarbayev, who is in regular contact with the Kremlin.

Putin struck a more moderate note than expected on the conflict in east Ukraine, where fighting between pro-Russian rebels and Kiev's forces has claimed at least 4,300 lives since April. Western nations have imposed sanctions on Russia for what it says is its role in providing the militants with personnel and arms, something Moscow denies.

"I very much hope that in the near future we will have a final cease-fire agreement" in east Ukraine, Putin said in televised remarks after meeting with Hollande. Without a fully implemented truce, he said, "it is difficult to picture Ukraine as a territorially integral country, and Russia, as is well-known, supports the territorial integrity of Ukraine." 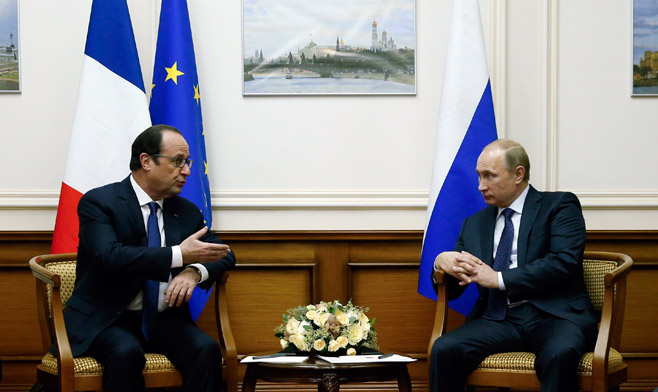 President Vladimir Putin meeting with his French counterpart at Moscow’s Vnukovo airport over the weekend.

In his own remarks televised after the meeting, Hollande said "de-escalation of the Ukrainian crisis is possible," if the cease-fire agreement, agreed by both sides in Minsk in September, is fully implemented. "France wants this crisis to end because it is causing suffering, for Ukrainians and because of the sanctions, and because it prevents relations with Russia from proceeding as they should."

Putin said the two leaders had not discussed the delivery of the two Mistral warships, which was suspended by France after coming under intense pressure from its allies due to tensions between Russia and Ukraine.

On Friday, France's defense minister said in a TV interview that the delivery of both ships may be canceled, if the political situation doesn't change.

"We proceed from the assumption that [the deal] will be carried out," Putin said, but added that Russia would "act with understanding no matter how these events develop."

Hollande's visit comes at a challenging time for Putin: Russia's economy and currency have been battered by plummeting oil prices and Western sanctions, and the South Stream gas pipeline project, which would have brought more Russian gas directly to Southern Europe, has been abandoned.

Alexei Pushkov, a prominent member of Russia's parliament who often expresses Kremlin views on foreign policy, praised the French leader for his unscheduled visit to Moscow.

"Hollande, who until now has always remained in the shadows on Ukraine, has left the shadows and showed his character: He paid a timely visit to Moscow and met with Putin," Pushkov wrote on Twitter.

Ukrainian President Petro Poroshenko wrote on his official Twitter account Saturday that he had spoken to Hollande by phone about how to resolve the conflict in east Ukraine.

In comments carried by Ukrainian news agencies, Poroshenko announced on Saturday that the Kiev government would meet with rebel leaders in Minsk on Tuesday to discuss how to better implement the cease-fire agreement.

Hollande Says Putin Should Look to the Future, Not the Past

French President Francois Hollande urged Vladimir Putin on Friday to look to the future rather than the past to help ease tension over the Ukraine...
unclear cause