A British museum spirited one of the world's most hotly disputed artistic masterpieces to Russia for a loan, causing an outcry in Greece, which says the priceless 2,500-year-old statue was looted from Athens and must be returned.

The marble statues from the facade of the Parthenon, among the greatest works of ancient Greek art, have been the subject of acrimonious dispute since they were taken from Athens by the earl of Elgin, bought by the British state and placed in London's British Museum in 1816.

The museum announced on Friday that it had sent one of the marbles — a headless, reclining nude sculpture of the river god Ilissos — to the Hermitage in St. Petersburg, home town of President Vladimir Putin.

It portrayed the loan as proof that Britain was keeping the marbles on behalf of all humanity, and a sign of how culture can rise above diplomatic division at a time when Anglo-Russian relations have frozen to post-Cold War lows over Ukraine.

"Both institutions believe it is precisely at moments like this that the museums have to keep speaking," British Museum director Neil MacGregor told BBC radio.

It was the first time any of the marbles had left Britain since arriving two centuries ago. The decision was not announced until the statue was already safely in Russia on Friday, where it will go on display as part of an exhibition to mark the Hermitage's 250th anniversary.

The museum's board only approved the decision to allow the work to go to Russia 15 days ago, The Times of London reported Friday.

Hermitage head Mikhail Piotrovsky called it a "very emotional and important gesture," The Times reported. Piotrovsky added that it was the most important work that would come to the Hermitage during the celebrations to mark its jubilee.

Apart from the arrival of the statue of Ilissos, the Hermitage began marked its jubilee with a 3-D light show on the facade of its main building Saturday, which told the history of the museum. An exhibit of British expressionist painter Francis Bacon opened Saturday.

The United Kingdom and Russia are currently participating in a year of cultural exchange, featuring more than 500 cultural programs and events both in Russia and the U.K. But government ministers in the U.K. said they would not attend any of the events after Russian annexed Crimea. 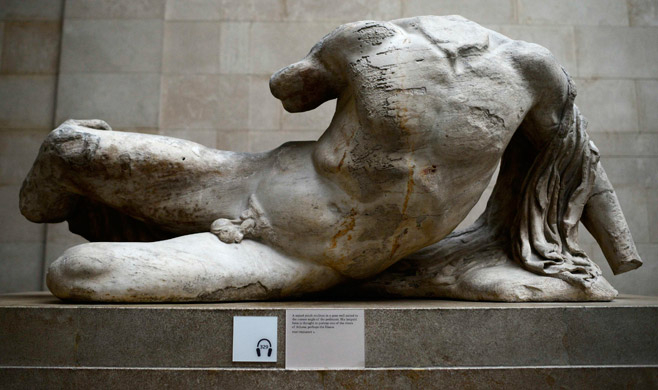 The Ilissos statue as it looked on show at the British Museum in October.

Greece has fought for generations to have the Elgin Marbles returned, in recent years hiring international lawyer Amal Clooney, newlywed wife of movie star George, to make its case. She was not available for comment, but has said in the past that she wants a friendly resolution.

Greek Prime Minister Antonis Samaras said the loan to Russia "provokes the Greek people" and demolishes what he described as one of the British arguments for keeping the marbles: that they were too fragile to be moved.

"Greeks identify themselves with their history and their culture, which cannot be parceled out, loaned or given away," Samaras said in a statement. Greek newspapers fumed: The leading Ta Nea called the decision a "show of power."

Samaras opened a new, state-of-the-art museum at the Acropolis in 2009, which Greece says destroys another British argument: that Greece lacked the facilities to protect the treasures and display them properly for the world.

For all the bluster, the head of the New Acropolis museum, Dimitris Pantermalis, said the loan could bring closer the day when the marbles are finally displayed in Greece.

Greek officials said they did not plan to make aggressive moves to reclaim the statue while it was in Russia, such as demanding Moscow send it to Athens rather than back to London. They are seeking a settlement through United Nations cultural body UNESCO.

David Hill, chairman of the International Association for the Reunification of the Parthenon Sculptures, said the loan to Russia was "highly provocative" and a "very rude gesture."

A spokeswoman for Prime Minister David Cameron said the decision was up to the museum.

"We recognize that this will be a really interesting exhibition for the people of Russia," the spokeswoman

"Our view is clear that it is the property of the British Museum, and it's up to the trustees there to decide how they exhibit it."(Reuters, MT)

The statue will be on show until Jan. 18 at the Hermitage Museum. 34 Dvortsovaya Naberezhnaya. Metro Admiralteiskaya. St. Petersburg. (812) 571-3465. hermitagemuseum.org.