Down an alley off Ulitsa Maroseika in central Moscow stands a half-finished glass building with construction debris out front. The building seems an unlikely place for an artist, but it is here that political satirist Andrei Budaev has his workshop.

The inside of the workshop is small, the walls covered with Budaev's modified political images. His 2015 calendars and photo albums are stacked high on every surface.

Budaev is an imposing man in his late 40s, dressed simply in a navy sweater and jeans. He has sleepy eyes but speaks quickly.

Budaev has been doing political caricatures for almost 20 years, since the Yeltsin era. He is best known for re-creating classical paintings, mainly Russian, with the faces of the political figures of the time crafted onto them.

"Not one work of art is protected from him in the history of humanity," German news magazine Der Spiegel sardonically commented a few years ago.

Budaev told Der Spiegel that "I bring our politicians back to earth. I want them to understand that they're not gods."

He is particularly fond of The Wanderers, a group of 19th-century Russian painters, and has released a collection of works based on them every year since 2011, featuring privatization architect Anatoly Chubais, President Vladimir Putin, Prime Minister Dmitry Medvedev and even ballet dancer Anastasia Volochkova, among others.

Now like most political art in Russia, he looks to the conflict in Ukraine.

Sitting in his workshop, Budaev showed work from one of his 2015 calendars. It depicts a band of a dozen men dressed in army fatigues, many carrying machine guns. U.S. President Barack Obama is in the center, flanked by Secretary of State John Kerry, who has a particularly large weapon, on Obama's right, and Ukrainian billionaire bank tycoon and governor of the Dnipropetrovsk region Igor Kolomoisky on Obama's left. The work is called "Kolomoisky's Army."

"It shows a band of nationalists. The sign behind says $10,000 for a Moskal," Budaev said, using an impolite Ukrainian term that means "a Russian."

The full advertisement, which reads "$10,000 for a Moskal: A Great Deal From PrivatBank," was a fake advert that went viral in spring. Kolomoisky is head of Ukraine's largest bank: PrivatBank. 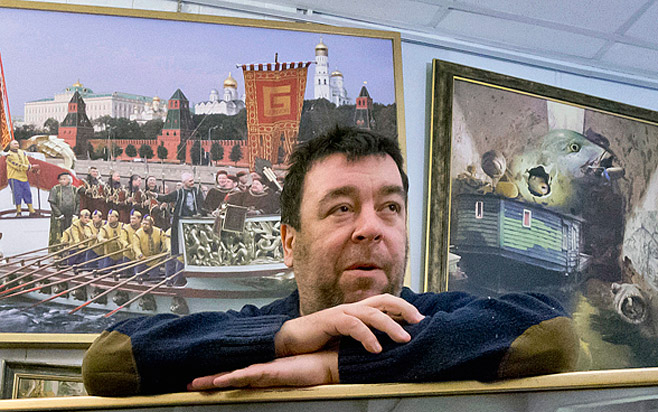 Budaev has a workshop in Moscow near the downtown Ulitsa Maroseika.

Budaev becomes especially animated when he talks about the calendar's image for August, which shows Obama and his wife Michelle sitting on a bed. Michelle Obama wears an oversized men's shirt and is looking seductive. President Obama wears pajamas and holds a joint in his hand.

"There was that [news story] that the president had smoked marijuana," Budaev said. "I think this is an interesting idea — the idea of where the inadequate president comes from."

Besides Obama, Russian former oil tycoon Mikhail Khodorkovsky and Foreign Minister Sergei Lavrov also feature prominently in Budaev's work. Probably the best image in one of the 2015 calendars — enjoyable no matter what your views on Ukraine are — is a picture of Lavrov in an Elvis costume at the door. Obama, not in an Elvis costume, waits inside. The picture is called "They didn't expect that."

Putin is not exempt: In the final image of one of Budaev's 2015 calendars, the Russian president stands in a bathroom and smiles at Kolomoisky, tied up and hanging from his arms, as if he is about to start an interrogation. The image is called "Scene in a Bathroom."

"[Putin] is a complicated man. I don't know if he's seen [my work] or not, whether he likes it or not," Budaev said.

Budaev added that his work is simply meant to be ironic. "I didn't think up these events," he said.

He is proud of the realistic faces that he can achieve in his work, which he says usually only takes one or two hours by computer — if he finds the right image.

"For me it's important to get the face right, like a document. Otherwise I might as well draw it," he said.

Budaev is working on three main topics these days: the United States, Europe and Ukraine. He has published eight albums and is working on the ninth, which will be entirely about Ukraine.

After nearly 20 years of making satirical images, Budaev is indifferent about holding exhibitions in Moscow, particularly given the amount of money required and the unpredictability of Russia.

"In Moscow it's hard to plan. There is always some 'force majeure,'" he said.

Andrei Budaev's 2015 calendars and albums can be ordered from his workshop directly at Budaev.ru.